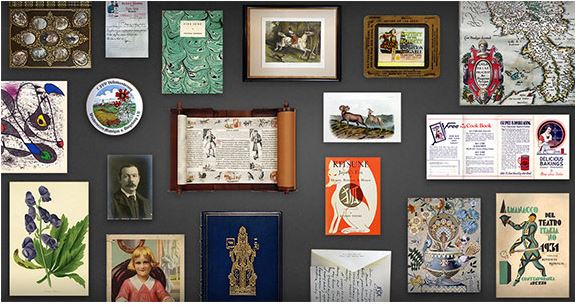 AbeBooks has added a new section to their website and it represents an expansion of the material the site is offering on behalf of its dealers. It's no secret the book market is not as robust as it once was. More and more booksellers have responded by expanding the type of items they offer. As collectors focus more on subjects rather than just one particular type of presentation – books – dealers are selling various other types of paper and ephemeral items within the fields they cover. The "secret" to successful marketing, of course, is to give the customers what they want.

And so AbeBooks is expanding to fit the reality of collecting today. Founded in the 1990's, and quickly growing to become the largest marketplace in the world for old books, Abe has long remained focused on its original mission. That hasn't changed, but Abe is now adding a separate section to their website that is centered on material other than books, but that still appeals to today's more expansive book collector. Maps and atlases, art and photography, comics, and the broad category known as "ephemera" get their own sections. So do very specific types of books, such as signed books, fantasy, romance and reference. Within such categories are subcategories for further refinement. For example, within the category of ephemera are subcategories specifically for broadsides, magazines, manuscripts, pamphlets, postcards and posters. The collector can browse through a catalogue of material highly targeted to their own specific interests.

Abe points to a couple of Collections as examples of what is possible. Lorne Bair Rare Books offers a Collection of Eccentrics, Cranks & Difficult People. Bair regularly presents the writings of radical political movements, but these go from extreme to just plain crazy. Francis Livesey printed a broadside around 1905 headed Worse! And More Of It! Schools, Socialism, Lynchings, Ministers, Catholics, Negroes, Revolution, England. Livesey is consumed by creeping socialism, with public schools and child labor laws the primary culprits. He cites someone with the pseudonym "The Other Fellow" for showing "how child labor laws are working for 'race suicide' and other unnatural and ungodly acts." Livesey also points out how "Dr. Searle Harris, of Mobile, Ala, told President Roosevelt the negro was doomed to extinction by consumption. Somewhat true!" How does one become somewhat extinct? This, and many other comparably rational publications, can be found in Abe's Collections.

Földvári Books offers us a Collection of Propaganda, in this case, Eastern European communist era propaganda. Don't look for great art here. The Communists were more interested in the message than the art. A tough looking worker and unemployed man on this poster walk briskly, arm in arm, toward five tiny, fleeing capitalists. Though small, the capitalists are fat and bald. Ill-gotten wealth does this to you. In the background, factory chimneys bellow copious amounts of black smoke. The environment was not a major concern for those who produced Chernobyl.

Not all Collections offer such oddities. Donald A. Heald Rare Books has a Collection of Pocket Maps. For the young, this is what travelers used for directions before Google Maps and Waze.

AbeBooks' CEO explained, "Anyone who enjoys hunting through used bookstores, antique shops and art galleries for obscure treasures will relish Collections. We think customers are going to love this new way of browsing." The Collections do recreate the atmosphere of a treasure hunt through an old bookstore or a collection of catalogues. If there is a weakness to them, it is that the quantity of items is so great, and rapidly growing, as to make it a challenge for those looking for specific items. Abe has done some things to make it easier. Within a Collection, you can search by the most popular items (default), lowest price, or most recently listed. The last of these is particularly valuable when you come back to a Collection you have viewed before, so you aren't searching through items you have already seen to determine whether there is something new.

AbeBooks also offers dealers what they call "Master Collections." These allow booksellers to put their items in a larger, common catalogue with other sellers. Here, the ability to sort by price and recency becomes particularly important as these Master Collections can run to thousands of items. AbeBooks' Richard Davies noted that Collections are already divided into 25 main categories and 130 subcategories, with more to be added later this year, enabling viewers to target their interest. Still, he acknowledged that an ability to search for topics across Collections would be helpful and noted that Abe is working on such a feature right now.

A bookseller's collection can not only be found through the Collections page but also the seller's storefront. They will automatically show up there, enabling a collector to follow the Collections of a favorite dealer. Sellers can also link to their Collections from their own website, enabling them to serve as dedicated e-catalogues.

Abebook's Collections can be found on the following page: Collections.