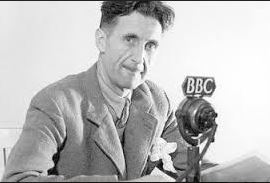 George Orwell (born Eric Arthur Blair) is one of the few mid-20th century writers who has easily crossed over into the new century and also seen his literary reputation and monetary values rise. He is now even better known than in earlier years, and the prices of his published works, letters and ephemera have also soared, particularly those that are signed or with some personal Orwell association.

Although Orwell (1903-1950) attained considerable stature as an essayist, journalist, radio commentator and critic, he is best known for his two final works of fiction. They are Animal Farm (1945), a grim look at the evolution of a totalitarian state disguised as a children’s fairy tale, and Nineteen Eighty-Four (1949), a novel where war is constant, surveillance is total and “Big Brother is watching you.” Both of these books came out near the end of the author’s life and both had US and UK editions.

Indeed, as Americans this month contemplate presidential choices with distinct dystopian overtones, Orwell can also be seen as a writer with uncanny prophetic abilities. He is currently ranked by some sources as the second most popular writer in the world (behind Tolkien) and - at the turn of this century a prominent British publication estimated there were as many as 40 million copies of Animal Farm and Nineteen Eighty-Four then in print. The digital book base ABE lists a signed copy of Nineteen Eighty-Four, which sold for $26,500, as one of the most expensive books ever purchased on its site.

But while $26,500 is an impressive number, in the current scheme of things Orwellian, the top seems to have moved up by at least several notches. Rare Book Hub has a total of 988 listings for items by or related to Orwell dating back to 1957. A wide variety of his published work, and to a lesser extent letters have been regularly offered, with most items finding a buyer. In more recent years many have exceeded their presale estimates.

In 1957 an inscribed presentation copy of “Down and Out in Paris and London”, a 1933 first edition sold for measly 8 GBP (Great British Pounds). Also in 1957, an extensive lot of correspondence signed by Orwell running to 230 pages and including letters to his various publishers brought a humble 270 GBP.

Orwell’s work came to auction fairly frequently throughout the last half of the 20th century and up until the mid-1980s prices seldom rose out of the low two digits (whether in pounds or dollars).

With the Edward Snowden security surveillance disclosures of 2013, Orwell’s name was again on every lip. That year an inscribed copy of Nineteen Eighty-Four realized 140,500 GBP at a Sotheby’s auction, more than quadruple the pre-auction high value estimate of 30,000 GBP.

It wasn’t just the prices on his most famous works that were going up. In 2013 a first US edition (1934) of Burmese Days with a dust jacket sold for $16,000, also quadruple the presale high estimate. Burmese Days is Orwell’s first novel and considered a desirable and hard to find book in either the US or UK editions. Presently the British firm of Peter Harrington is offering a copy with an asking price slightly over $59,000.

A quick check of the online book sites brings up a variety of Orwell titles offered by other reputable booksellers with fancy asking prices. These include: Critical Essays $48,000; Keep the Aspidistra Flying $37,400; Coming Up for Air $31,000; Road to Wigan Pier $18,750; Homage to Catalonia $17,500…. to name only a few pegged in the five figure range.

Perhaps the choicest selection of vintage Orwell signed and association material currently on the market is an Orwell archive from the publisher Victor Gollancz. It is offered by Jonkers, a UK bookseller, asking 350,000 GBP.

The Jonker’s website describes the collection as: “The publisher's archive of papers relating to the publication of each of Orwell's books by his first publisher, Victor Gollancz, with the exception of Coming Up For Air (all the correspondence for which having been destroyed shortly after publication). In all some 200 documents, central to which are nineteen letters and three telegrams by Orwell, but also including four original signed contracts (one each of Down and Out in Paris and London, The Road to Wigan Pier and Inside the Whale and one for a three book deal covering, The Clergyman's Daughter, Burmese Days and Keep the Aspidistra Flying) as well as extensive correspondence between Gollancz and Leonard Moore (Orwell's agent) and Harold Rubenstein (Gollancz's solicitor) and various reader's reports and internal memos.”

Jonkers terms the collection “An extraordinary, comprehensive archive of correspondence between Eric Blair (George Orwell) and his publisher, regarding the writing and publishing of Orwell's books. Copies of all outgoing correspondence from Gollancz has been preserved in carbon providing a comprehensive epistolary narrative of the process of getting Orwell into print, from the initial approach from Moore introducing Orwell and his manuscript of Down and Out in Paris and London, through to Gollancz's ill fated decision to decline to publish Animal Farm. The nineteen letters from Orwell, discuss changes that need to be made to the manuscripts (Gollancz was notably cautious regarding libel). Throughout, one can chart an emboldening in Orwell's approach regarding what he was prepared to alter, his reasoning providing an insight into his creative process. The letters also discuss his work in general and touch on that of other contemporary authors (D.H.Lawrence, Henry Miller, Evelyn Waugh), his health and political views.”  A more detailed description of what is included can be found at the Jonker’s web page (See link above).

Even with a falling pound and rising dollar, if UK 350,000 is a bit rich for your blood consider the wealth of other (non-book) Orwell related merchandise and kitsch currently available: There is the Orwell sterling silver pendant “Thought Criminal” ($36); a plethora of Orwell t-shirts “Freedom is Slavery”, “Orwell 84”, “Big Brother is Watching You” ($18-$27); bumper stickers with Orwellian messages like, “In time of universal deceit telling the truth becomes a revolutionary act” ($4). Farther down the food chain are magnets, key chains, decals and buttons inscribed with messages like: “Hope lies in the proles” ($1.25).

With a huge body of printed work and a growing array of non book auxiliary merchandise he is distinctly a man for all budgets.

The list of Orwell criticism and commentary is gargantuan and much of it is now online. What value it will have in the future remains to be seen. But for pure entertainment don’t miss the gangsta rap Cliff Notes style videos known as Thug Notes. There’s one for Animal Farm

www.youtube.com/watch?v=ITKfr1qOZ0w and another for Nineteen Eighty-Four

And last but not least in the “Guessed Wrong” department check out the T.S. Eliot letter to Orwell on Faber and Faber letterhead rejecting the manuscript for Animal Farm. The 1944 letter, now in the collection of the British Library, is an interesting historical footnote and a worthy reminder that hindsight is 20-20.

On the web page displaying the historic letter the museum writes: “Publishing Animal Farm was not a straightforward task. Before its eventual publication by Secker & Warburg in August 1945, the novella was rejected by at least four different publishers, and Orwell even considered printing it as a pamphlet. While it was written in the form of an animal fable, readers of Animal Farm immediately recognised it for what it was: a satire of Stalinism which condemned totalitarian practices and presented Stalin as a traitor of the Russian Revolution. Many publishers thought the work too controversial to be published at a time in which the Soviet Union was a powerful ally of Britain against Germany. Another publisher objected to the choice of pigs as the protagonists of the story, worried that such portrayal would offend Russian readers. Despite these initial difficulties, Animal Farm achieved considerable success in Britain and abroad, and within months of its publication the work was translated into several languages.”