Daillant de la Touche... Do You Have What It Takes? 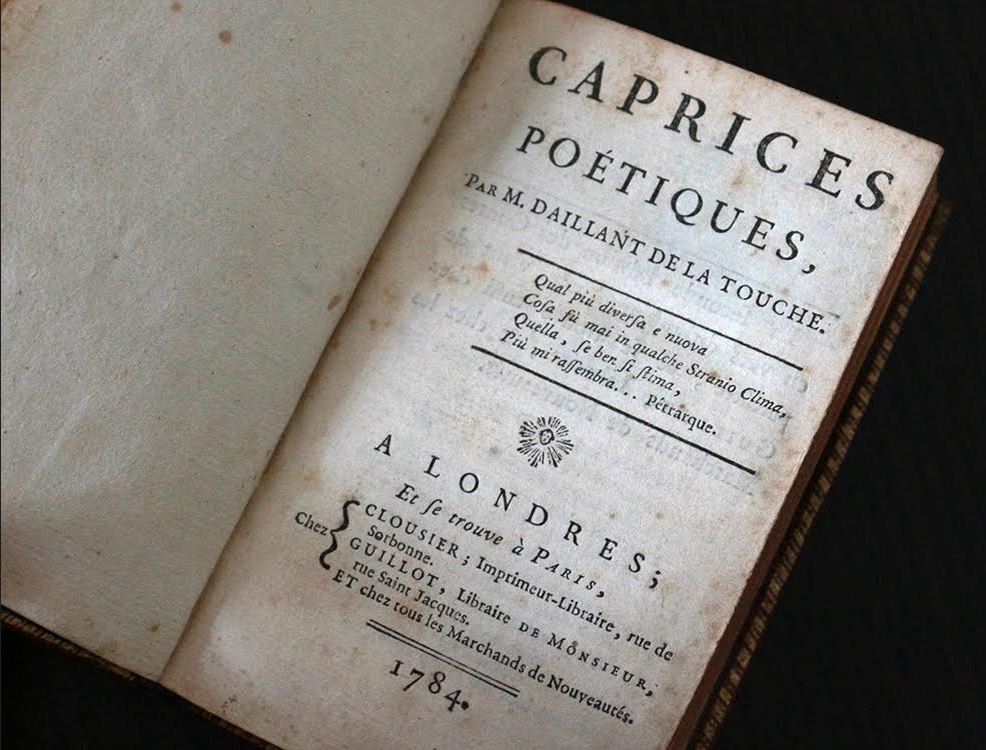 “There are men whose silhouettes vanish in time,” writes Cristina Trinchero in the collective study La ricerca della verità. Jean_Daillant_de_La_Touche “That’s what happened to François-Jean Daillant de la Touche, who is totally forgotten today.” Well, not totally. First, some people like Miss Trinchero do remember him. Then, a few old books are still going around that testify of the tribulations of this “bel esprit” from the 18th century.

The guy from whom I bought my copy of Daillant de la Touche’s Caprices Poétiques1, or Poetical Fancies (Londres, 1784), was somewhat amused. “How did you get to hear about this author?” he asked. Well, I had never heard about him. But I read a few of his poems, and I was seduced.

The old Hébert was talking to her daughter Eliante,

“When you were 8—between you and me—,

“You were nippy, quite mean,

“And you would break all your toys.”

The husband, with an indolent voice,

Answered: “To her early tastes Madam has

Daillant de la Touche’s poems are typical of the French “bel esprit”, a very hard notion to define—I know of no authoritative definition. It is a sort of ferocious wit covered with a layer of good manners and courtesy—a sort of word of iron in silky verses. They gave birth, in the 17th century, to many short and witty poems that embody the good taste of the day, and ridicule social blunders. The notion of “bel esprit” evolved during the 18th century, but remained at the heart of the French spirit until the Révolution of 1789 put an end to it. Thus, according to the date of publication of his poems, not only was Daillant de la Touche a “bel esprit”, but he was also one of the last.

So you want to see the light,

My little one, and know Paris?

To the insipid businessman,

To the bourgeois and the “beaux esprits”,

The upstarts and their servants.

Have some fun with the satirists,

The imposters, the lawyers,

The abbots, and the politicians.

Better you than me.

There is also a lot of romance in his “poetical fancies”, as expected; but always with a flavour of derision, or causticity.

The Way of the World

And I dared not showing up.

I had pluck her flower when she was 15,

She was so young! At last, I meet her.

She is full of wit, self-assured, and graceful.

She laughs, chatters, she irritates me,

And I am the one who is embarrassed.

Daillant de la Touche was 40 when these poems came out. At the back of the title page, the printer mentioned that a second edition of his Tales in verse was in the process of being printed. In fact, Daillant de la Touche had already a long and chaotic career behind him. Fortunately, he left many letters—they are gathered in the Pierre-Louis Ginguené Funds at the National Library of France. In 1808, he wrote: “I should say that it is now 40 years since I first came to Paris, being young, rich, and the happy owner of 900 pounds, free from debts and with a lot of ambition.” He soon found his way to the literary society of Paris, working for Fréron’s famous publication, L’Anné Littéraire. A conservative at heart, he wrote an anonymous eulogy of Molière (Eloge de Molière, Paris 1771) and various essays between 1768 and 1780. “He was among those many ambitious young men who, having left their native countryside, made good use of the good education they had received by turning preceptors in Paris,” says Trinchero. Of course, at the bottom of his heart, he was hoping for some aristocrat to grant him a pension as a writer. But it never happened, and by 1780, he was a ruined man—and he had to run from his creditors, seeking refuge in the North of France. “Paris,” he then wrote to a friend, “is the city of good fortune. But will you find it? Do you have what it takes to find it?”

Paris and the countryside

Paris, this “chaos of wonders”, was the centre of social life. The courtesans had no respect for those who lived in the countryside, and regarded them as mere peasants. Whether you existed in Paris—and Versailles, of course—or you did not exist. But Paris was a demanding mistress, who favoured only a few of her numerous suitors. And no matter how rudely she treated the others, once they had fallen in love with her, there was no way out. “My happiness is to be my own master / I love calm above everything, the shadow of the woods / The banks of a lake, claims Daillant de la Touche in his poem entitled About Me. Yet, he felt like an exile while forced to work as a preceptor in the countryside. “There are no games, here; no friends, no conversations, no walks, nothing. I’ve ended up in a cruel family. These people are more bourgeois than Mr Jourdain (the famous character in Molière—editor’s note), ignorant, old and dull; I take care of five boys, who are noisy, mean and vicious.”

At the time, poetry saved him from despair. He wrote his first verses, and hope sprung again. “Daillant put all his heart and ambition in his Caprices Poétiques,” underlines Trinchero. She quotes one of his letters: “With a touch of sensibility, a touch of taste, I could have become a poet. Unfortunately, I thought it too difficult. My laziness convinced me of it; but forced to write some verses, as I tried to escape death by boredom, I found what I had been after! What a joy to read a few good verses in my works—because I dare say that some of them are well-written.” Daillant was ready to ride the merry-go-round of Paris again! “He then had to contact the King’s censor, to look for a bookseller, to collect the necessary money for the printing, and to find some journalists willing to give him some publicity,” writes Trinchero. His collection of tales in verses came out first, and got a good review in Le Mercure—but it was a poor seller. Notwithstanding, Daillant de la Touche decided to print his poems, and they were very well received. The famous Almanach des Muses described them as “natural, graceful and light.” Yet, nothing happened for him. Consequently, he gave up poetry to focus on novels. He wrote Kerfolin (Amsterdam, 1785), inspired by Voltaire’s Candid. In fact, it was a satire, designed to fight the Philosopher’s influence—Daillant de la Touche was a close friend to Fréron, one of Voltaire’s deadly enemies. “The novel came out anonymously,” says Tricheron, “and met with no success. The author stopped writing for two years.” Do you have what it takes?

In 1788, Daillant de la Touche grew fascinated with the Swedish philosopher Emanuel Swedenborg, and he eventually put out an abridged version of his works in French, Abrégé des Ouvrages d’Em. Swédenborg (Stockholm, 1788). “It is the only piece of work that was really successful, and which brought him some financial reward thanks to several reprints,” underlines Tricheron. But the Révolution found him on the wrong side of the fence and nothing is heard from him until 1808, when he is seen roaming the streets of Paris in want, begging for bread and work. This is the sad part of the story. Getting old, disillusioned and probably quite lonely, Daillant de la Touche was exhausted. His fight for survival and recognition had driven him to a dead-end, yet he remained “proud” (Tricheron) and refused for many years to enter an auspice—“until he gladly accepted a room at Bicêtre, in 1816, where he met his death eleven years later. Daillant’s silhouette disappears in this sinister building that sheltered the crippled and the wretches, who died from hunger in the streets of Paris.”

Thus vanish our dreams and aspirations under the sun, crushed by the wheel of Fortune. Nothing remains of them—or of Daillant de la Touche, but a few books, including a beautiful copy of his Caprices Poétiques bound in full morocco, the reminder of better times, when we were young and strong. Daillant’s story is a sad one. But it is also quite inspiring. People of a certain age know that success is not only a matter of “having it” or not; Fortune is whimsical, and life is like a river that continuously runs through our fingers—catch it if you can! Daillant de la Touche did not take it all, all right—but he did his best. And, faithful to the “bel esprit”—a derisory rampart against the nakedness of man—, he did it with style.

No, no, you could not die, Amante,

And you would still be alive,

Had you ever been.

Were nothing but lies,

Nothing exists down here,

Life is but a dream.

1Caprices Poétiques, Á Londres et se trouve à Paris (1784). One in-18° volume, 123 pages, title page included. According to the National Library of Australia, this is a fake location of printing, like almost all Daillant’s books, and it was printed in Paris—which is quite likely.