Perfumes for People Who Want to Smell Like Their Old Books 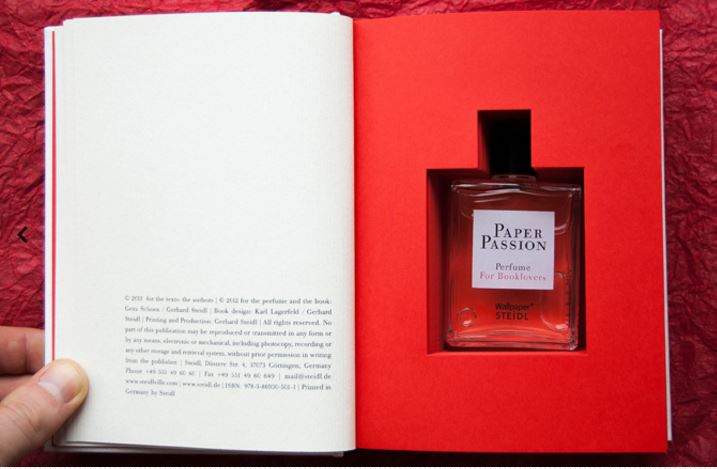 Paper Passion – perfume in a book.

The smell of old books is intoxicating to those who love antiquarian tomes. The collector does not need sight to sniff out a classic library. Love is blind. It is one of those fragrances that is not so much beautiful in its own right. It's the association. It is the antiquarian equivalent of new car smell. People can buy new car spray to spray in their old cars. Once again, the old car is new and fresh, ready to head out on the road, instead of the shop. Were it not for the association, car owners might think it smelled like glue, vinyl, plastic, and the lubricants from which it emanates. With the new car association, it becomes perfume.

The same can be said about old book smell. It is a perfume in an old library. But... a perfume, literally? Welcome to the new world of fragrances. People may be replacing their libraries with odorless, plastic electronic readers, but they miss the smell of old, paper books. Now, you can bring that fragrance back, not just as a spray for your library, but carry it around with you all day as a perfume applied to your own body. You can smell like an old book. Science is wonderful.

A logical place to look for perfume that smells like old books is the I Hate Perfume line, described as "perfume for people who want to smell something different." Here is one: In The Library. It is described as, "a warm blend of English Novel, Russian & Moroccan Leather Bindings, Worn Cloth and a hint of Wood Polish." No flowery scents here! The designer explains, "To many, of course, these various bookish odors mean nothing. But to an avid reader and collector like myself, these smells are as magical as the bouquet of a great wine is to a connoisseur."

Sweet Tea Apothecary, makers of "historically inspired perfumes," is noted for its Dead Writers Perfume. A unisex fragrance, it is said that it "evokes the feeling of sitting in an old library chair paging through yellowed copies of Hemingway, Shakespeare, Fitzgerald, Poe, and more." It contains, "black tea, vetiver, clove, musk, vanilla, heliotrope, and tobacco."

Beatrix (Potter) is made by the same perfumery. What would her scent be? Hopefully, not the smell of rabbits. Again, we must turn to the designers, as I would not know how to describe the smell of a perfume - "Beatrix has notes of moss, blue spruce, dragon's blood, fire, earth, and chamomile. It has a wonderful green scent with the light floral of the chamomile headnote." Chamomile tea was what Mrs. Rabbit gave Peter at bedtime when he did not feel well, so it is not surprising she would have carried the scent. I don't know whether that was also true of Mrs. Potter, or whether she was an earthy or mossy woman, but who is to say she was not?

Here is one more from Sweet Tea Apothecary – Death in the Afternoon. That's no bull; it truly is the name. The maker notes, "No one exemplified salty machismo quite like... Ernest Hemingway." This scent has "notes of tobacco pipe, vegan Egyptian musk, champagne, bay leaf, sandalwood, fennel, and bergamot. This unisex scent is reminiscent of a strong glass of absinthe and leather-bound books." One suspects the machismo Hemingway might not have liked anything unisex named after him, but perhaps he would have been more gender neutral had he lived in the 21st century. Or maybe not.

Commodity provides a perfume with the very basic name, Book. According to their description, "With its many unexpected twists and pleasantries, Book is an exciting mixture of Spicy Cucumber and Torchwood that tips its hat to the fellow Hemingways and Fitzgeralds of the world." There's Hemingway again, this time associated with spicy cucumbers. Did he consume spicy cucumbers? There is a drink called the spicy cucumber margarita, so my guess is if he did, this was his vehicle.

Demeter has provided us with a cologne called Paperback. According to them, this is like "a trip to your favorite library or used bookstore. Sweet and lovely with just a touch of the musty smell of aged paper." Who wouldn't want to small like musty old paper? And, what exudes excitement in the opposite (or same) sex better than being associated with an old library? Shhh. Don't answer too loudly.

For the younger folks, perhaps something not so old and musty is in order. Gerhard Steidl has partnered with Wallpaper magazine to create such a fragrance, Paper Passion Perfume. This "perfume expresses that peculiar mix of paper and ink which gives a book its unmistakable aroma, along with the fresh scent which a book opened for the first time releases." This one comes in a book, partly hollowed out to hold the bottle of perfume inside. Text is provided by Gunter Grass, Karl Lagerfeld, and Geza Schoen. You won't know whether you are smelling the perfume or the "fresh scent of a book opened for the first time" when you open its pages.

So, why do old books have their distinctive smell? There has actually been a scientific study conducted to answer this question. Published in the August 2009 issue of Analytical Chemistry, the title of the report is Material Degradomics: On the Smell of Old Books. The authors are Matija Strlic, Jacob Thomas, Tanja Trafela, Linda Cséfalvayova´, Irena Kralj Cigic´, Jana Kolar, and May Cassar. That's enough brain power to suggest someone thought this topic worthy of serious research.

Their purpose, however, was not to determine what ingredients to use to make old book smell perfume. As they note, "heritage institutions (libraries, archives, and museums) are interested in quantitative VOC [volatile organic compound] analysis as a rapid diagnostic tool for the degradation and condition of their collections as well as evaluation of conservation treatments and materials analysis." In other words, a scientific "smell test" can help collectors determine how better to preserve the various books in their collection. Different papers emit different combinations of gasses, which in turn can alert conservators as to how best to treat them.

For a less scientific view, the authors describe the old book smell as, "a combination of grassy notes with a tang of acids and a hint of vanilla over an underlying mustiness, this unmistakable smell is as much part of the book as its contents." While they note this is caused by "several hundred identiied volatile and semi-volatile organic compounds," that "hint of vanilla" comes from lignin, a compound similar to vanilla, while the mustiness comes from some combination of the hundreds of others.

On a more serious note, the authors explain the more rapid degradation seen in paper produced roughly after 1850 compared to earlier papers. At that time, rosin replaced gelatin as a compound to enable ink to attach to the paper fibers. Aluminum sulfate was added to precipitate the rosin on the fibers. While rosin contains some acids, the authors attribute the deterioration in newer paper to the tendency of the aluminum sulfate to make the paper acidic, it forming a weak solution of sulfuric acid.