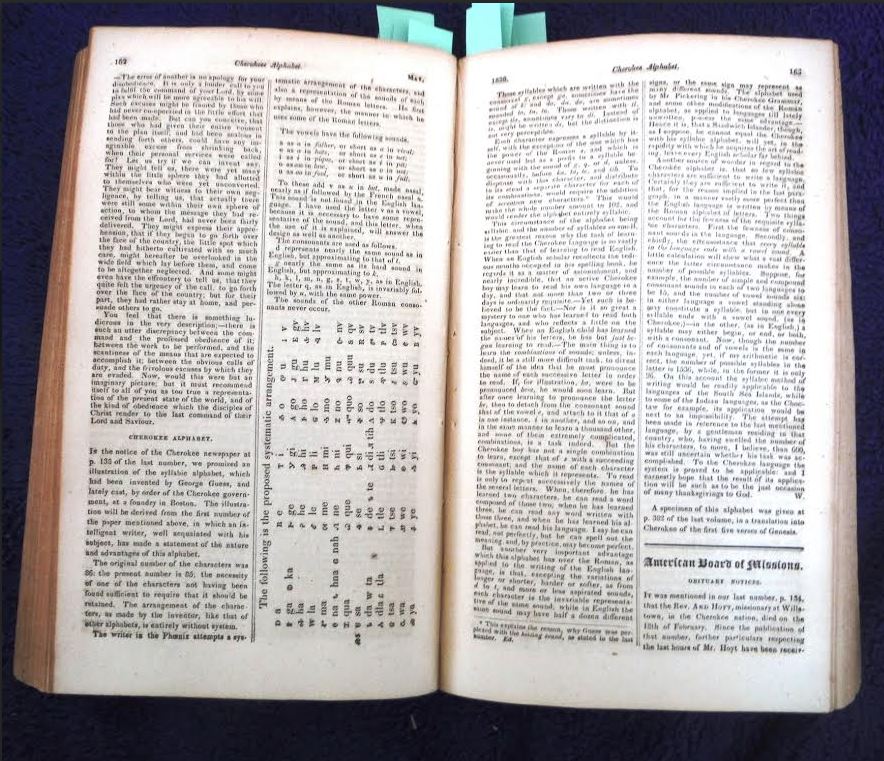 A very early printing of the Cherokee alphabet devised by Sequoyah was published in the Missionary Herald in 1838.

I became a reader of the Missionary Herald because it was an excellent primary source in English of information about Hawaii in the early 19th century. As a dealer in Hawaii and the Pacific I found the reports of the first American missionaries from about 1820 to 1840 to be fascinating eye-witness narratives about life in the islands.

These communications, mostly excerpts from letters or journals, were printed in the Missionary Herald, small monthly periodicals issued by the Boston based American Board of Commissioners for Foreign Missions (ABCFM). The issues were eventually indexed and came out yearly as bound volumes. Each one contained numerous reports not only from Hawaii, but from many other parts of the world. Also included were some of the publications of other mission groups and a detailed accounting of various financial contributions to the cause. It was one of the most popular magazines of its day and circulation was substantial.

The Missionary Herald reports from Hawaii in this period cover all the islands, along with the personal and religious observations of the writers. Though most of what was published is text, there are also a few maps and line illustrations scattered through the years.

While the writing of American Protestant missionaries may leave something to be desired in the journalism department, there are several points to be made in their favor. The Hawaiians had no written language and the missionaries opened schools throughout the islands, translated scripture into Hawaiian, brought in printing presses (and sent back to Boston to request an additional supply of the letters “K” and “A” to do the job). They printed millions of pages in Hawaiian both religious and secular. The missionary devotion to literacy and education, however heavily skewed to their own point of view, can not be denied.

In the process they interacted with Hawaiian royalty, rode horseback or traveled by sea to remote parts of the islands, and without hesitation or second thought did their best to suppress and eradicate the indigenous culture and impose their own views. In passing they freely stated their observations on everything they observed from hula dancing (they were against it) to the character of the people (passive and subservient to their rulers and chiefs), the physical proportions of the natives (very large), their dwellings (dirty and with the inhabitants living side by side with dogs and pigs), native religious beliefs (idolatrous), and other events of the day such as volcanic eruptions (impressive).

Many of you know the bones of this story: How the Brig Thaddeus left Boston in 1819 and was not heard from again until almost two year later; how the intrepid Americans found the islands in a state of turmoil with the old idols overthrown and the old king dead; how they interpreted this as a sign of Divine Providence that the “pagans” would be receptive to their message of a new Christian God, and the teachings and morals of their religion and so began an era that has repercussions to this very day.

At their best these reports are a mix of exciting informative first-person observations combined with very detailed statistics. They liked to quantify everything: this many instructional pages printed, that many students at school, this number converted to Christianity, or that number lapsed or fallen from the faith through drink or fornication. At their worst, with their undeviating emphasis on proselytization, the Missionary Heralds can be tedious religious tracts.

From the point of view of Hawaii, the Missionary Heralds become less interesting after 1840, both because the missionaries are no longer viewing the scene with fresh eyes and also, after 1839, when the French forcibly introduced Catholicism to the islands, the Protestant writers become more concerned with their struggles to prevent their flock from straying toward Rome and devote less energy to recording the actual events of the day.

It should also be noted that almost without exception the reports of the missionaries are made by men from a male perspective. Missionary women, their duties and accomplishments, while substantial are mentioned only briefly and in passing. The major exception is for the wives of notable men who die in service and are thought deserving of extensive obituaries.

As collectible antiquarian material the Missionary Herald is addictive and it is challenging. Addictive because it’s sprinkled with nuggets of interesting information and challenging because it is almost entirely text, hand set in double columns in incredibly small type. Though I first started to read it to find out about Hawaii, I soon realized that the same period (1820-1840) was equally fascinating in other parts of the world.

The the reports on the missions to the Cherokees runs roughly on the same timeline as Hawaii. The issues from the 1830s are filled with detailed accounts of the development of the Cherokee alphabet, the printing of the first Cherokee newspaper, the seizure of Cherokee lands and the relocation of the Cherokee peoples. The missionaries sided with the Cherokees and played an important role in attempting to prevent these events and for their efforts were prosecuted and jailed.

Missionary Heralds also include reports from other Native American peoples including Sioux, Ojibwe and tribes located in New York, Washington and Oregon. These and others all fell into the missionary orbit, and the reports of the conditions seen first hand are consistently good reading.

This also holds true for Africa, especially Southern Africa where in the 1830s the missionaries had the misfortune to be in the wrong place at the wrong time and find themselves squarely in the middle of raging hostilities between the Zulu nation and the Dutch farmers. In this case there is little religious conversion going on as the reports are filled with accounts of the hostilities between the two sides, battles, casualties and narrow escapes as they flee for their lives.

A particularly good example of the kind of correspondence found in the Missionary Heralds comes from Borneo in 1840 where a letter from Mr. Youngblood is printed under the header: "Difficulties Encountered." In it he writes that he has just reached Borneo and is taking stock of the situation.

Trying to describe obstacles to conversion of the natives he reports among other things: the houses are built on stilts and are reached by water and therefore difficult to meet with more than one family at a time. In the morning the good people of Borneo have many other things to do so they do not welcome visitors. Mid-day it is very hot and also not a good time to pay a call. Afternoon they are all Muslims and they pray, so it is not a good time to visit. In so many word, he concludes it may be harder than he thought. Or, in the words of the famous cartoon, "How about never?"

The Missionary Heralds are at their best when describing life on the American tribal frontier, the wilds of Africa, the kingdom of Hawaii and other far off places where traditional established religion and literacy has yet to arrive. They are less interesting when writing about Constantinople, Persia, India, Ceylon, Syria and the Holy Land, all places where the missionaries encounter well established forms of worship and often a less than enthusiastic reception for their beliefs.

For the reader of history digitized copies of Missionary Heralds from 1820 to 1922 - (Volumes 1-118 complete) can be found on the internet at the Hathitrust site. (Link at end)

Those interested in actually buying copies of the publication as originally issued should be aware that prices vary widely depending on condition and whether bound or in pamphlet form. There are some, though not many maps and views; the early maps of Hawaii and other parts of the world are considered scarce and desirable. They are often quite pricey.

Virtually all volumes are also available in reprint form in various formats.

Since there were subscribers to this publication in practically every American town with a Protestant congregation it is easiest to find copies of the original pamphlets and bound volumes in New England and any part of the country settled before 1800. This publication was once so common they were tossed out with the trash. A new generation of readers, scholars and historians now seek them out. As a result prices for original issues printed in the early 19th century continue to move upward.

For those not familiar to with the ABCFM, here is a brief synopsis of the history excerpted from material found at Harvard’s Houghton Library. (Link at end)

“The American Board of Commissioners for Foreign Missions (ABCFM) was founded in 1810, the first organized missionary society in the United States. By the time of its centenary in 1910, the Board was responsible for 102 mission stations and a missionary staff of 600 in India, Ceylon, West Central Africa (Angola), South Africa and Rhodesia, Asiatic and European Turkey, four different regions in China, Japan, Micronesia, the Philippines, and the "Papal lands" of Mexico, Spain and Austria. Missions to American Indians had come and gone; likewise a mission to Hawaii, where the church had achieved independence from the Board …...

“The ABCFM began as an inter-denominational society, including Presbyterian and Reformed churches, besides its core of Congregationalists. After some secessions due to the slavery issue and the formation by the Presbyterian Church of its own foreign mission board, the ABCFM was left as a Congregationalist body after 1870 …...

From a journalistic standpoint the most interesting reports came from missions to peoples of primitive cultures most of whom had no written history. These narratives are the most intriguing because, unlike the journals of early explorers or travelers who were only passing through, these were often the first or early eyewitness reports from people who were actually on the site for extended periods of time. Despite their biases, the missionaries were seeing and reporting with fresh eyes things that had seldom been noted before.

One of the most challenging tasks in reading the Missionary Heralds is to pick the reporting out from the religion, as the desire to proselytize is the main theme and the reporting on the conditions of the people, their customs, and current events is considered incidental to their main purpose, i.e. the conversion of the natives, respectively identified as pagans, heathens, idolaters, (or worse) cannibals to their own Christian faith.

Missionary Herald on Line 1820 to 1922 - volumes 1 through 118 complete and available in digital format as well as other material related to the ABCFC. The index to each volume is usually found in the December issue. catalog.hathitrust.org/Record/005909183

American Board of Commissioners for Foreign Missions Wiki: en.wikipedia.org/wiki/American_Board_of_Commissioners_for_Foreign_Missions

Materials at Harvard’s Houghton Library along with historical notes:

Hawaiian Mission Houses (HMH). This is the business name of the Hawaiian Mission Children's Society, a not-for-profit organization and genealogical society founded in 1852, and was formerly known as Mission Houses Museum. This is a link to their digital collection. There is substantial additional information available at their library and archives in Honolulu. www.missionhouses.org/library/digital-collection