In a Change of Plans, Gordon College Will Not Be Selling Part of its Rare Book Collection 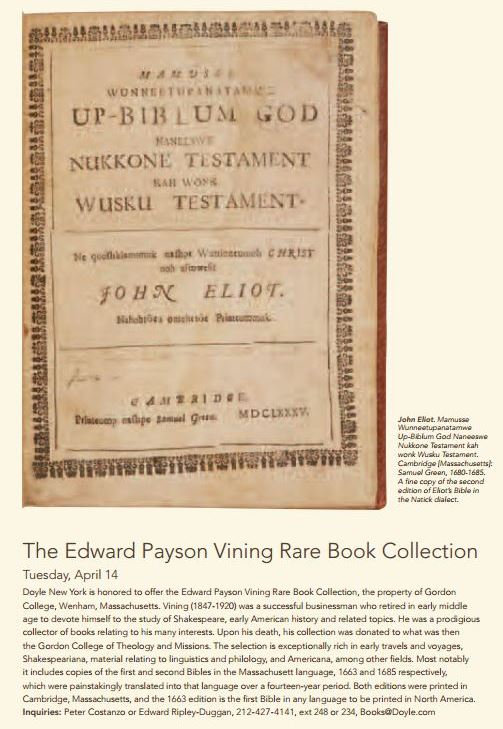 Announcement of the Vining sale, a sale which will never be held.

A major controversy from last year over a library's plan to sell some of its rare books appears to have been quietly resolved in a way that will please those who support retention of the full collection. A year ago, Gordon College, a private, Christian school north of Boston, announced it would sell 10% of a rare book collection to support the maintenance of the remainder. As with all such plans, it stirred up a hornets' nest of opposition, some from faculty, some from alumni and others. It was sufficient to put the plan on hold, and now it appears to have been permanently cancelled.

In early 2015, Gordon College announced it was going to sell 10% of a specific collection. They even went so far as signing on Doyle New York auction house to conduct the sale. Doyle posted an announcement of the sale and a general description, though not the specific lots. That description said, "The selection is exceptionally rich in early travels and voyages, Shakespeariana, material relating to linguistics and philology, and Americana, among other fields. Most notably it includes copies of the first and second Bibles in the Massachusett language, 1663 and 1685 respectively, which were painstakingly translated into that language over a fourteen-year period. Both editions were printed in Cambridge, Massachusetts, and the 1663 edition is the first Bible in any language to be printed in North America."

To be sold was not 10% of all of their old books. It was 10% of a specific collection, given to the college in 1921 by the heirs of Edward Payson Vining, a railroad officer. While Vining was not a railroad magnate, he was still a very successful official who was able to retire early and devote the bulk of his life to his loves – book collecting and writing. Some of his theories were a bit esoteric, perhaps a result of having too much time on his hands. He wrote a book about how the first overseas visitors to America were neither Columbus nor the Vikings. He believed some Buddhist monks from Afghanistan were the first to arrive. He also wrote a treatise on how Hamlet was really a woman. When you have lots of time and money, you can do things like this. Meanwhile, he built a fine book collection, worth a very substantial sum, that his family gave to Gordon, undoubtedly fulfilling Vining's wishes in the process.

Gordon gratefully accepted the valuable contribution, but evidently didn't really know what to do with it. For years, most of the collection remained in boxes. By 2015, some of the books were showing their age and the problems associated with keeping them in less than ideal conditions. The type of care, climate control, and such really needed was not within the budget of an institution whose focus was something other than preservation of old books. This was not a desperation situation. Unlike some colleges these days, Gordon is not at risk of going out of business. They're doing fine. It's just that maintaining the collection would require significant financial investments that might need to be drawn away from activities closer to their primary mission, educating students. So, administrators decided to sell 10% of the collection to raise the funds necessary to create facilities up to the task of preserving the remaining 90%.

Naturally, there were objections. This is an issue that pits preservationists against practical financial managers, and there is rarely a clear right and wrong here, just strong differences of opinion. It has happened before and will happen many times again. However, in this case, there was a twist that favored the preservationists. The 1921 gift of the books was subject to some conditions. Exactly how that was stated was lost, no one still having a copy of the original agreement. What was still around was a comment written in a book by the college's then President, Nathan Wood, in 1953. He wrote that the trustees "voted to accept the library on the understanding that the library shall be retained intact as a memorial to Edward Payson Vining and that no material change shall be made in its contents which would affect its material or sentimental value."

Would a sale of 10% constitute a material change in its material or sentimental value? Estimates indicated the books to be sold might be worth $2 million, but it was unclear whether the 10% of the quantity of books also represented 10% of its value. It could be more, or less. As for sentimental value, who knows? Gordon's position, at least from a public image standpoint, was further eroded by comments from Vining's 76-year-old great-granddaughter opposing the sale. The college decided to cancel the sale at Doyle scheduled for April 14, 2015, while it decided what it should do next.

Now, that decision has apparently been made, and without the fanfare that accompanied the prior announcement. According to the Salem (Massachusetts) News, the college has withdrawn the original plan. A spokesperson for Gordon said the college was responding to the strong feelings of faculty that another solution be found. While no details of how the issue of cost of preservation will be handled were given, Gordon did say it was exploring options with other institutions, possible grants, and such to resolve the concerns without selling off part of the collection.