The Scarron Pamphlet, a Deadly Book 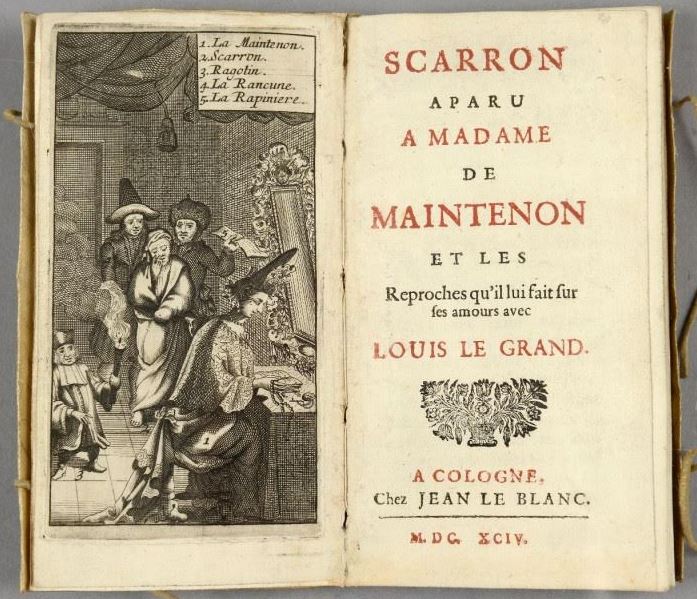 “Would you believe that an unhappy book, nowadays insignificant and pale when compared to what we can say or write against our kings; that such a small book caused the death of several people?” asks Charles Nodier in his Bulletin du Bibliophile, in 1843. He is referring to one of the most famous pamphlets of the 17th century entitled Scarron Apparu à Madame de Maintenon et les reproches qu’il lui fait sur ses amours avec Louis le grand / Scarron Appearing to Mme de Maintenon, blaming her love affair with Louis the Great (A Cologne, chez Jean Le Blanc, 1694). A little deadly book, indeed!

In the late 17th century, Louis XIV—a.k.a Louis the Great—decided to eradicate the various libels and satirical books that challenged religion, morals and politics, and sustained the agitations of the time. The printers, writers or booksellers involved in what was called “the forbidden literature”, were severely punished. However—or consequently—, the trade of forbidden books and libels throve. The new and formidable Lieutenant of Police, Antoine de La Reynie, urged his superior to restrain the right to sell books to official printers only; so to control them better. The mighty Minister Colbert (1619-1683) couldn’t agree more, and he significantly reduced the number of printers and booksellers while increasing the controls over presses and typographical materials in Paris. “Thus, reads the essay Livres saisis à Paris entre 1678 et 1701, we know that very few illegal editions were printed in Paris.” It was safer and easier to print them in Holland, a Protestant country quite happy to damage the authority of their worst persecutor—and often at war with France. Scarron Appearing..., allegedly printed in “Cologne”, Germany, was in fact printed in Holland by the fictitious printer “Jean Le Blanc”— whose name reminds us of Jean Sambix, invented by the Elzeviers at the time.

Around 1673-74, Louis XIV came under the influence of his last mistress, the dubious devout Madame de Maintenon (1635-1719), whom he secretly married in 1683. He hardened his policies against the Protestants by revoking the Edit de Nantes in 1685. Forcing them to leave France or to convert to Catholicism, he generated much discontent. Among the main reasons behind the amount of libels in circulation at the time, Pierre Clément, in La Police sous Louis XIV (Paris, 1866), lists “the ever-increasing persecutions suffered by the Protestants.” At the end of the reign of Louis XIV, Madame de Maintenon chased away the courtesans and libertines from Versailles and covered the kingdom with a dull veil of religion. Thoughtlessness and satires were out of fashion.

How to deal with bad books

Appointed to the quarter of Paris where most printers were located in 1666, Commissioner of police Nicolas Delamare—author of Traité de la Police (Paris, 1707)—explains how he proceeded to search and destroy forbidden books: “To find out about the bad books, we pop up at the printing houses. Should we find some under the press, we notify it, and seize the books. As far as the peddlers are concerned, being usually vile people ready to run away, we put them under arrest.” The seized copies were “torn, and pulped—in our presence, and then dumped into a tank full of water where they (were) turned into raw cardboard.” Delamare even raided the printing house of the famous bookseller Riboult once; he was sent to the Bastille in 1688 for publishing the scandalous Almanach de Milan.

Smuggling banned books was probably quite profitable, but it was also very dangerous—and it was getting more difficult each day. In 1667, one M. de Pontchâteau easily smuggled a full chariot of Mons’ Bible in Paris. But in 1683, Pierre Bayle wrote to his brother: “The inquiries about forbidden books being so efficient and the sentences against the smugglers so severe, I can’t promise you any book from this country (Holland, where he relocated in 1681—editor’s note), as no one lets you put any into their boat, for fear of being arrested and their cargo seized.” Hustlers or political activists like Courtilz de Sandras operated under various names, and had several addresses in Paris to cover their tracks. As the anonymous author of the preface of Scarron Appearing...—believed to be one La Roque, see below—puts it: “I dared not presenting this work to the Parisian booksellers, knowing they would refuse it (...). You know that it is dangerous to turn powerful people into your enemies.” He should have known.

In November 1694, La Reynie ordered one Rambault, printer, and one Larcher, bookbinder, to be hanged for “printing, binding and selling a nefarious libel against the King.” The last quote is taken from the famous journal of Antoine Bruneau, a lawyer who died around 1720. He goes on: “They were first put to the question (torture), both ordinary and extraordinary, for printing (...) nefarious libels such as his Mariage secret avec madame de Maintenon (Secret Marriage With Mme Maintenon), and L'Ombre de M. Scarron (The Shadow of Mr Scarron).” Indeed, the King’s wife was once married with the famous freethinker author of Le Roman comique, Paul Scarron (1610-1660).

But which libels is Bruneau precisely talking about? His description is imprecise, and nobody has ever found a trace of a book entitled L’Ombre de Scarron. Apparently, several libels were written against Mme de Maintenon at the time:

There is no trace of another one entitled Secret Marriage With Mme de Maintenon either, but the libel we’re talking about was incriminated for revealing the morganatic union between the King and Maintenon—did Bruneau write from the top of his head, caring not to check the actual titles of the libels? That’s what some people, including the bibliophilist Charles Nodier, thought. According to them, the first two books were the same one. So was the guess of Pierre Clément, who quoted Bruneau’s journal, adding a footnote: “There’s a libel entitled Mr Scarron Appearing to Mme de Maintenon, Cologne, Jean Le Blanc, 1694, in-12°, 36 pages (sic), including a plate. It is probably the same book.”

But the Centre de recherches sur l’histoire du livre au XVIIe siècle (CRHL 17) claims that L’Ombre de M. de Scarron / The Shadow of Mr. de Scarron did exist. On their website, they quote Bruneau, who describes the frontispiece as follow: “It represents the statue of the Place de la Victoire; but the figures of the pedestal are replaced by four women holding the King in chains: La Vallière, Madame de Fontanges, Madame de Montespan and Madame de Maintenon (former mistresses of the King—editor’s note). The engraver is on the run.” This book has remained so rare that even Nodier could not set an eye upon it. Writing about Scarron Appearing..., Nodier had to trust Bruneau. Thus he said that this pamphlet was illustrated with the “Place de la Victoire engraving”.

Since Scarron Appearing... features a totally different frontispiece—it shows Mme de Maintenon visited by the ghost of Mr Scarron and three of his most famous characters, Ragotin, La Rancune and La Rapinière—it is quite reasonable to consider that it is a different book. The CRHL17 is convinced, “yet without any definite proof”, that there was a libel entitled The Shadow of Scarron... (with the “Place des Victoires plate.”) How come, then, no copy has ever resurfaced—mostly since the apparition of the Internet? It is because, the CRHL17 says, ”it was apparently totally destroyed.” To justify their position, they quote a second entry of Bruneau’s journal: “Loads of this libel were found floating on the river (the Seine) between the bridges of Notre-Dame and Le Change, where they had been cast in haste.” But Bruneau is not more precise here, and there’s no proof that he’s talking about the Shadow of Scarron... This point will remain unsolved until a copy of this alleged libel resurfaces somewhere.

To make things even blurrier, let’s add that there is a play entitled Scarron ressuscité, ou l’ombre apparue sur son tombeau parlant à sa femme / Scarron revived, or the Shadow Cast on his Tombstone, Talking to his wife (Paris, 1660). “This title”, says Henri Chardon in his book Scarron Inconnu (Slatkine Reprints, 1970), “reminds me of a libel, printed some 40 years later, in 1694, against Mme de Maintenon.” Did Bruneau mingle the names? And the frontispieces? Indeed, his description of the “Place de la Victoire plate” reminds us of the classical plate illustrating Charron’s La Sagesse—another satire, or a mix up?

A Basket or A Sphere

The CRHL17 lists three editions of Scarron Appearing.... The first one, dated 1694, would be 100-page long (instead of 136 for the following ones), but it is a dubious edition: “It has only been quoted once,” says the CRHL17, “in the (Edouard) Rahir catalogue (1896—editor’s note). We could find no other trace of it. Rahir mentions no frontispiece.”

The last two editions would differ only by the vignette on the title page: a basket for the first one (1694) and a sphere for the second one (1694). A copy with the basket is to be found on googlebooks, while the CRHL17 states they studied a copy with the sphere. Is it a second edition, or the same one with another title page only? A thorough comparison is here required.

“The French government tried to destroy and suppress this libel by all means,” underlines Jacques-Charles Brunet in his Manuel du Libraire (1864). “This probably explains why it has become so rare.” As a matter of fact, it is still hard to come by nowadays. Two years ago, the Oger-Blanchet auction house in Paris sold a very nice copy for 310 euros, fees included. Not actually an expensive book compared to its incredible story. After all, it was almost “printed with blood”—the kind of stories that collectors, “being weird people,” (Nodier) love. However, noting that a copy “didn’t sell for more than 10 francs at the sale of Baron Heiss’,” Nodier blames it on its poor contents: “The author seems more imaginative than witty, and shows more meanness than talent.” What a poor funeral oration! To be honest, it is a pleasing reading. Scarron’s ghost appears to Maintenon, blames her pompous titles such as “Marquise de Maintenon” or “Supérieure de l’Abbaye de Saint Cyr”, and reminds her of her low extraction. Then, he blames her for the religious radicalisation of the King, the revocation of the Edit de Nantes—against the Protestants—, and dubs her, alongside Father La Chaise—the King’s confessor—, “the enemies of peace.” There are also many critics of St Cyr, the prestigious girls’ school she opened. All in all, this is a nice little book, which will make you smile—well, Louis XIV sure didn’t enjoy it much. What really upset him, and what really justifies his merciless revenge, was the revelation of the most sensible state secret of the time, meaning his secret marriage with Maintenon.

Justice has always been a partial institution, especially in the 17th century. It seems that Rambault and Larcher never had the good connections. On the contrary, one Chavance, also involved in the pamphlets, was saved by Father La Chaise with whom he was “more or less related,” says Bruneau—and yes, this is the very same La Chaise who is attacked in the pamphlet; not a rancorous man! Another suspect named La Roque, “who wrote the preface of these impudent books,” (Bruneau) also got away with it. On the contrary, Bruneau, whose journal gave birth to most of the conjunctures about the “Scarron pamphlet(s)”, also tells about the widow of Cailloué, a printer from Rouen, who, although “old and disabled,” did die at la Bastille on November 9, 1694, “where she had been sent for the pamphlets.” According to the writer Funck-Brentano, her daughter Marianne, who had accompanied her, was later sent to the Covent of the Nouvelles-Converties (the newly converted, or the Protestants who had turned Catholics to remain in France after the revocation of the Edit de Nantes). The same author also mentions the case of another bookseller from Rouen, Dumesnil, who was eventually released from La Bastille in June 1695. At the time—and sometimes today—, Justice was not really about who you disrespected, but who protected you.