A Tale of Two Not Too Bright Book Thieves 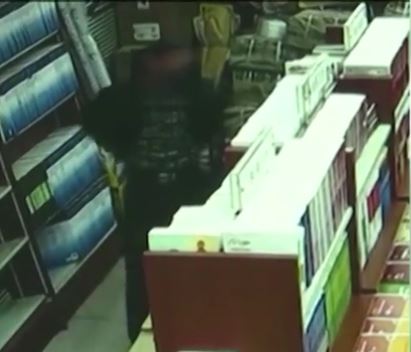 Book thieves are often clever, though not ethical, but even the smartest of thieves eventually makes a mistake. Frequently, it will come in attempts to sell the material, such as an eBay listing for a rare item that an expert, perhaps thousands of miles away, suspects is a stolen copy. Other times, the thief may leave evidence behind – the notorious dropped razor blade on the library floor, or the gap in the bookshelves. However, the thief who broke into All The Rage Comics in Festus, Missouri, left something behind no thief should ever leave behind. He left his cellphone.

The burglar hit the comic book store early in the morning before opening by breaking through the back door. He didn't take much, the most notable item being the store's cash register (it was empty). Why a thief would even bring a cellphone to a burglary is hard to understand, but take it out and leave it on the counter? Couldn't he have waited until he left the scene of the crime to check up on his social media? When police arrived, he received a call. Naturally, he was not there to answer it, but when the ringing stopped, the phone, which was lying face up, displayed a photograph. It was a picture of its owner. He was flexing his muscles, displaying he was more brawn than brains. A check of the phone revealed further identification of the thief. He was arrested the following day.

In turn, the shop described itself as the "home of the 'smart' phone bandit." The phone was smart, but not the bandit.

Another not too bright "book collector" appeared on camera in a book store in Weinan, a city of 5 million in China's Shanxi Province. Sometimes, it's not such a good idea to appear on film. A Mr. Luo went to his local store and priced out a book he wanted to buy. He then picked out ten others he did not wish to buy. That is not to say he did not want the books, he just didn't want to buy them. So he stuffed the other ten inside his pants.

How he managed to walk to the cashier's station that way, or why his awkward gate was not obvious, is not clear. No one noticed, no one, that is, except the lady at the other end of the camera. Mr. Luo quite unwisely chose to stuff the books in his pants in front of a security camera. Like leaving your cellphone behind, this is one of those things a thief should never do. Presumably, he knows this now.

Not only was the security camera capturing his every move, it was being viewed live at the other end by the shopkeeper. She became suspicious that Mr. Luo was holding his books down, not up, as people normally do when reading them. She became even more leery when she observed him pushing the books into his waist. After the gentleman purchased his book and proceeded to exit, the shopkeeper asked if he had any other books, to which Mr. Luo replied no. With that, she called the police, who promptly searched and arrested him. Mr. Luo explained he was getting the books to sell to a friend, who most likely was not a devoted reader, but someone in the business of selling stolen books.

Some book thieves are smarter than others, but there's only one sure way not to get caught. Don't steal in the first place.