A New Auction House in London 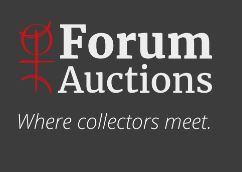 In 2013 Stephan Ludwig sold Bloomsbury Auctions, together with his Dreweatts business, to the Stanley Gibbons Group PLC for about PS 15,000,000.  In 2015 he retired and is now preparing to return to combat under a fresh banner.  The new firm is called Forum Auctions [www.forumauctions.co.uk] and includes some members of the of the Bloomsbury team that brought the company to prominence over the past several decades.

Filippo Rotundo.  Mr. Rotundo of Philobiblon Galleries in Italy and New York, focuses on introducing the most selective collectors to the greater possibilities of collecting.  He will assist to bring both great collectors and great material into the rooms.

Rupert Powell.  He will head the books and manuscripts department of the new firm after having occupied a similar position at Bloomsbury for many years.

About the field Mr. Powell is quoted, “The Forum business model embodies my view on the future of our market.  I am thrilled to be joining Stephan and his team of like-minded specialists.  Client service is the key differentiator in our industry and our new venture holds this ethos ahead of all else.  It is my objective to make Forum the go-to auction destination for the discerning book collector, both in Europe and the USA.”

The auction field today has become very complex.  The barriers to entry have been reduced while the quantity of material to be re-priced and re-distributed has been increasing.  Traditional collectors have been aging while the population of new collectors has been approaching the field in a fresh, quality-value way that prefers market-determined prices.  Hence the company’s focus on the very best material, which has, at minimum, held it’s value and in many cases soared.

All elements in the field, the dealers, auction houses, institutions and collectors have seen both their approaches and strategies upended by the internet, changing tastes, and increasing clarity about rarity and value.  That Mr. Ludwig is attracted to return to the source of his earlier success suggests confidence in the future of the field.  As one of the field’s stellar performers it’s a very good sign.

Here is a link to the Forum Auctions website which is now coming to life.  The firm promises to provide a ‘traditional’ auction experience with in-the-room, on the phone and on-line bidding.

First sales are scheduled in July on the 13th and 14th and will be held at the Westbury Hotel in Mayfair, London.  Two private collections of English 20th century literature and Renaissance material, including splendid early examples from the Aldine Press, will be offered.