Stolen Columbus Letter Found at the Library of Congress Returned 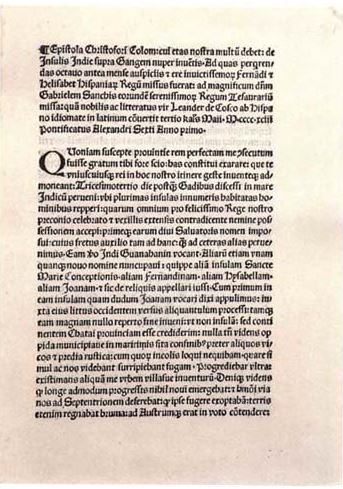 A stolen Columbus Letter, taken from an Italian Library, and eventually coming to reside at the U. S. Library of Congress, has made its way back home. At a ceremony in Rome, Italian Culture Minister Dario Franceschini couldn't help but note the irony – Like Columbus himself, "it is interesting how 500 years after the letter was written it has made the same trip back and forth from America." Presumably, improved security at the Riccardiana Library in Florence will prevent the letter from making a couple more round trips to America as Columbus did.

The Columbus Letter can justly be considered the founding document of America. Christopher Columbus "discovered" the New World in 1492, though he thought he had reached the Indies. After surveying the area, he left some of his men on Hispaniola Island and returned to Spain to report on his findings. On the way back, he composed this letter to King Ferdinand and Queen Isabella. He arrived in Lisbon on March 4, 1493, and ten days later he was back in Spain.

News of his discovery soon spread, and there was a demand for copies of his letter. The first printed version was in Spanish. Only one copy, at the New York Public Library, is known to survive. Several others quickly followed, including the Latin edition by Stephan Plannck in Rome. There was a first and a corrected version by Plannck. This is the corrected, or Plannck II edition. Both were published in 1493.

While some of the steps that took this copy of the Columbus Letter from Florence to Washington are known, there are gaps that remain a mystery. Among the unknowns are when, and by whom, the letter was taken from the Riccardiana Library. It makes its first traceable appearance when purchased by a collector in Switzerland in 1990. It was consigned to Christie's auction rooms in New York in 1992 where it sold to an anonymous buyer for $330,000. In 2004, it was bequeathed to the Library of Congress. The donor, likely the same as the earlier anonymous buyer, and the Library of Congress were confirmed by U. S. officials to have acted in good faith.

In 2012, the U. S. Department of Homeland Security received notification that a copy of Plannck II was missing from the Florence library. The letter had been kept in a volume with 42 other documents of incunabula. Its having gone missing was unrecognized because whoever took it replaced the letter with a forgery. It was a good forgery, but not perfect. The paper used was very old, but still about a century less so than the actual printing date. A sophisticated means of photocopying was used to print the text. An examination of the Library of Congress copy revealed that their copy was the one taken from the Riccardiana Library. Traces of that library's stamp, which had been removed by bleach, were discovered.

How and when the copy made its way from the library to the Swiss collector in 1990 is the remaining gap in custody. A perhaps somewhat defensive director of the Florence library, Fulvio Silvano Stacchetti, denied it could have been taken from them. He said that it had only ever been viewed by a scholar in their manuscript room, and was then always checked by two library employees. He instead pointed to a period between July 28, 1950, and April 5, 1951, when it was sent to the National Library in Rome. However, some have questioned whether the photocopying process used could have been accomplished that far back.

The repatriation ceremony, attended by U. S. Ambassador John R. Phillips, was held at the Biblioteca Angelica in Rome on May 18.