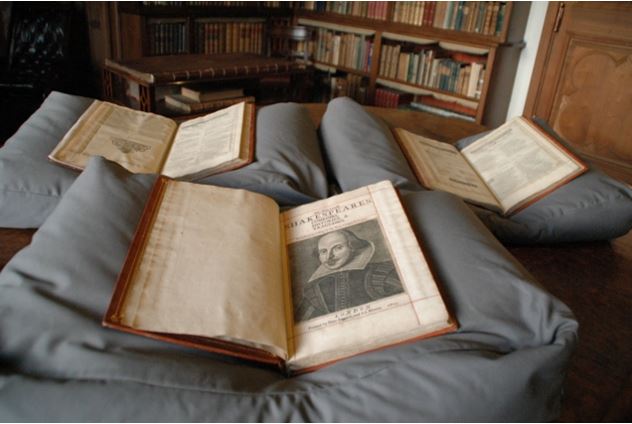 A long lost copy of Shakespeare's First Folio has been discovered, in just the sort of place you would most likely expect to find one – in the forgotten corner of a Scottish castle on the Isle of Bute. For those unfamiliar with the Isle of Bute, Wikipedia describes it as "an island in the Firth of Clyde." Suffice it to say, Bute is an island off the Scottish coast. The castle is Mount Stuart House, built in the 1870's by the 3rd Marquess of Bute. It is large enough to lose a book in there for several centuries.

The First Folio was the first compilation of Shakespeare's plays. Published in 1623, seven years after Shakespeare died, it preserved many of his works that otherwise would have been lost forever. Macbeth, Twelfth Night, Julius Caesar, As You Like It and The Tempest are among the plays that we would not know today but for the First Folio. A group of Shakespeare's friends, realizing much of his work would soon be gone, scoured up scripts and whatever else they could find to publish a book that would preserve his writings. It was followed by three other folio editions in the 17th century, and by then, Shakespeare's work was so prized that countless editions of his plays and poems were published, continuing to this day.

A total of 233 copies of the First Folio had been known to survive. Now there are 234. No one knows for certain how many copies were printed, but the estimate is around 750. A First Folio is today one of the most valuable books in the world, a good copy valued at several million dollars.

When officials of the Mount Stuart Trust discovered what appeared to be a First Folio, they called in Professor Emma Smith to perform a verification. Ms. Smith is Professor of Shakespeare Studies at Oxford University, author of a recent book about the First Folio, an expert on the book. Evidently, Professor Smith was dubious about Mount Stuart's claim to have a First Folio, as the BBC quoted her as saying her initial response was "Like Hell they have." However, a thorough examination convinced her the copy was indeed authentic. Among points checked are the paper and its watermarks, exact type, including errors, and even smudging of thumbprints of the printer. There have been some copies made over the years that look authentic to the untrained eye, but this one is the real deal.

Who owned this copy for the first century and a half of its existence is unknown. Ms. Smith was able to first pick up on its history in 1786. It was acquired then by Issac Reed, who prepared a large biography of dramatic writers in 1782. He later re-edited a Samuel Johnson and George Steevens compilation of Shakespeare's works. Correspondence indicates the copy was previously owned by the Shakespearean actor John Henderson. This First Folio contains some of Reed's annotations.

It remained with Reed until he died in 1807. It was then put up for sale in a massive auction of The Curious & Expensive Library of the Late Isaac Reed, Esq. of Staple Inn. Deceased. Editor of the Last Edition of Shakespeare, held on November 2, 1807, by King and Lochee. It was item 8,663 (Reed had a very large and expensive library), described as Shakespeare's "Comedies, Histories and Tragedies, first edition, bound in 3 vol. elegant in Russia, and beautifully inlaid by the late Mr. Henderson, additional portraits." The Russia is long gone, having been rebound in goatskin in 1932. However, this copy remains bound in three volumes today as then.

It sold for £38, a large sum in 1807, but not outrageously so. It has appreciated in value way more than most other items in the sale. Nevertheless, eventual owner, the 3rd Marquess, commented the price was "too dear," according to a note in Mount Stuart's archives. Instead, it sold to someone with the initials JW.

Who was JW? Here is where it gets tricky. Indeed, this discovery has forced a reconsideration of the long-believed provenance of the copy owned by Sir John Soane's Museum of London. They long thought their copy had come from Reed. As a note on Soane's website says, "Isaac Reed, the Shakespearean editor had owned the copy of the Shakespeare First Folio which became the property of the noted actor John Philip Kemble in 1807, was bought by James Boswell the younger at the Kemble sale in 1821, and was finally purchased by John Britton on Soane's behalf at Sotheby's Boswell sale in 1825." "JW" would be strange initials for John Philip Kemble, but the note comes with a listing for the 1833 sale of J. W. Southgate. Is he "JW?" Did he maybe buy Reed's First Folio on behalf of Kemble? Southgate was himself an auctioneer. Then, if Soane sold it to the family of the Marquess, everything would tie neatly together. Unfortunately, there is one insurmountable problem – Soane's still has their First Folio! Mount Stuart can't have the Kemble/Boswell/Soane copy since Soane's still possesses it.

This apparent misconception goes back over a century. In 1902, Sidney Lee did a census of all the First Folios he could find. In it, he says the Soane copy "possibly" was Henderson's. That no longer seems plausible, unless Henderson had multiple copies. That seems like a long shot, though correspondence indicates Reed may have been given his copy by Henderson, or by his wife after he died, while the Soane website says Reed purchased it for £19 at the Henderson sale. Was that a different Henderson copy that was sold at his sale that made its way to Kemble and then to Soane?

The Reed sale was also described in John Wilson's Catalogue of All the Books, Pamphlets, &c. Relating to Shakespeare (1827), which includes a listing of various First Folio sales. John Wilson? Another J.W.! There's no indication he was the buyer in his description of the sale. Wilson notes that Kemble's copy sold for £112 s7 and was resold at the Boswell sale for £105, but does not connect Kemble's copy with Reed's, or specify it was in three volumes, as was Reed's. It appears to me that the traditional attribution of the Soane copy to Reed, through Kemble and Boswell, must be incorrect, and that its provenance must now be reconsidered. Kemble must have obtained his copy from someone other than Reed.

Here is a guess of what might have happened to Reed's copy. On the page where Soane's was showing what it thought was a connection between Reed's copy and their own, it describes the auction Catalogue of the rare and bijou portion, and a selection of valuable works from the library of Mr. J. W. Southgate, consisting of...collected by the late Isaac Reed... (1833). However, there was no First Folio in the Southgate sale. Still, did J. W. Southgate buy much of this material from the 1807 Reed sale, along with Reed's First Folio, but then sell the folio privately to someone in the Marquess' family? At some point between 1807 and 1896, someone in the Marquess' family obtains the book that was once "too dear," either at a better price or by paying up. We know this because it next appears in a catalogue of the Bute Library in 1896.

Evidently, the library did not publicize its possession too loudly as it does not show up in Sidney Lee's 1902 census of First Folios, that does mention the Soane copy. It remained in obscurity from 1886 until its recent discovery. It seems to disappear from public view for about a century at a time before finally making a reappearance. If you would like to take advantage of this latest sighting of what seems to be Haley's Comet-like brief appearances, it will be on display at Mount Stuart House through October 30.