Cartouche, or The Thieves of the 5th Republic 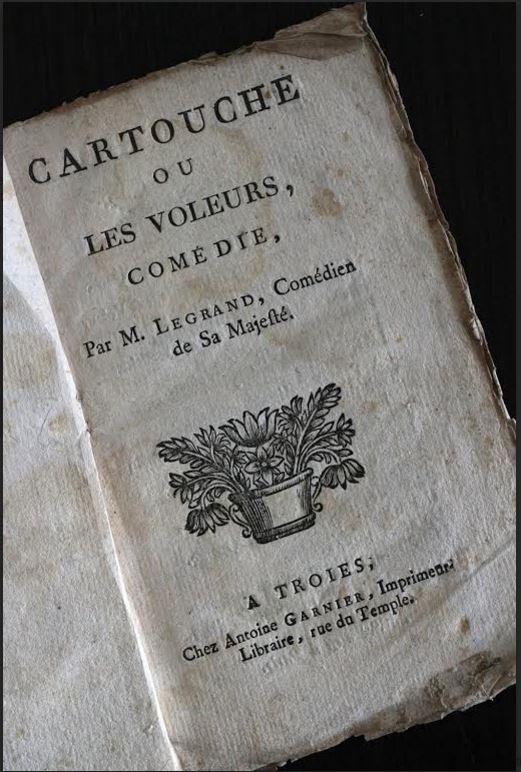 The economic crisis, the Panama Papers affair, the Protection of trade secrets law and the many financial scandals lately revealed in France have weakened the current 5th Republic and generated a general discontent reminiscent of the Régence of Louis XV (1715-1723). The bankruptcy following the system of Law (the first attempt to impose paper-money) occurred in 1720. One year later, Louis-Dominique Cartouche was broken on the wheel. The police of the time, hoping to restore the authority of the Régent, turned Cartouche into a diabolical gang leader. But for the people of Paris, he was a champion of the Have-nots. The system had created a monster that would partake in its destruction. And it was foretold in a short play, Cartouche ou Les Voleurs, given in Paris a few days before the bandit was put to death.

Louis-Dominique Cartouche has never been the master of his own destiny. This petty thug of La Courtille was made « the chief of the thieves of Paris » by the police, « the apostle of social justice » by the revolutionaries in 1789 and even a « priest hater » in the late 19th century. The play Cartouche ou Les Voleurs (Cartouche or the Thieves) tells us why he has always been seen as a popular hero. This remarkable 36-page play written by Marc-Antoine Legrand was given for the first time as Cartouche was waiting for his execution in the nearby prison of Le Châtelet. Although some witnesses described it as a “gentle comedy”, it is actually a fierce satire. Our copy is quite modest and answers all the characteristics of the peddling books as listed by the Médiathèque Grand Troyes: “Raw paper, used fonts, mute front cover usually made of a blue-grey paper—used to wrap sugar loafs—, rare engravings and always printed with second-hands woods.” It smells of the noisy streets of the Ancien Régime, where it was printed 300 years ago; in Paris for the first edition, or in Troyes—with no date—by “Antoine Garnier1”, as far as ours is concerned.

Louis-Dominique Cartouche was the first public enemy number one in French history; quite a celebrity. Everyone in Paris was talking about him and his cronies. The police, who were then mutating to fight crime more efficiently, drew an excessively dark portrait of him, using him as a pretext to clean Paris’ infected streets. They also read every book dealing with him before permitting their publication—hence their boring moral. These are exactly the yoke that the fake and anonymous autobiography of 1789, Les Amours et la vie de Cartouche—recently reprinted (DREAD Editions)—broke asunder. Published in the aftermath of the Révolution—the printer of the first edition pretended that the manuscript had been recovered from the ruins of the captured Bastille—, it enjoyed the new freedom of speech granted to all printers. Cartouche was let loose: “The boring probity of my father had always been contrary to my desire, “he” says. He intended to find an honest situation in life for me, but as I hardly understood this sentence—which is not realistic—I cared about nothing but reaching my goals by the shortest way.” Thus, our bandit became a prophet of the Révolution, a “general” fighting an unfair system—in a word, the revenger of the Have-nots.

In Cartouche, Histoire authentique (Paris, 1859), Barthelemy Maurice says that Legrand’s play was granted permission of publishing as soon as March 1719—which is weird, since Cartouche’s name was almost unknown by then. It was then entitled LeR. de C. (or R. of C.) for Le Règne (or reign), or Royaume (kingdom) of Cartouche. But the police of books disliked it, as they realized “that it was a satire against the people trying to arrest Cartouche” (Maurice). They were right; it was offensive—because it made people laugh. In Act I, scene XI, a crew of watchmen has just spotted Cartouche. “We are brave men,” says the Exempt (policeman) in charge. “Strong as lions!” retorts one of his men named La Valeur (Mr Bravery). But as Cartouche walks towards them with one of his cronies, the Exempt suggests a tactical retreat. “You’re right,” says Mr Bravery, “they are two, and we’re only twelve. The fight is unfair.”

What comes next made the whole of Paris laugh. Cartouche goes straight to the watchmen: “Move," he says to the Exempt, "or I blow your nose away, just like a rabbit’s!” Legrand here adds a stage direction: “Cartouche and his crony peacefully walk through the group of watchmen and fires his gun. All the watchmen fall on the ground.” This ironic scene was inspired by a true and famous anecdote. Cornered inside a house by dozens of Exempts, Cartouche calmly walked out, pretending to be an innocent inhabitant of the house. In the street, he came across two bowmen from the police who asked him: “Is Cartouche taken, Sir?” Firing his two guns at them, he answered: “Not yet!” In Legrand’s play, the watchmen get back to their feet once Cartouche is away: “Come on, comrades, let’s retreat in good order (...), we did our duty.” That’s what this unloved police called “their duty.” Yet, the weak Régent Philippe d’Orléans tried to recapture his subjects’ respect by all means—not unlike our current President, François Hollande—, especially since the terrible failure of the Law system, which made the lives of poor people even more difficult. Consequently, Legrand was denied the right to give his play, “until the bandit was captured," underlines Maurice, "on October 14, 1721.”

As soon as October 20, Cartouche’s life was given at Palais-Royal! However, it was not Legrand’s play; but another one entitled Arlequin-Cartouche, written by some Italian comedians. According to the Mercure de France (November 1721) it was a mere “succession of hosers’ tricks hastily put together into scenes so to outdo another play.” Another play? Legrand’s, of course. On the following day, our author gave Cartouche ou Les Voleurs at Le Théâtre François. Edmond-Jean-François Barbier, a lawyer and a keen observer of his time, stated in his Journal: “It is attended by an amazing amount of people.” Of course, “respectable people” (Mercure) saw these plays as indecent. Barbier notes that representing the life of a man “who really exists, who is everyday questioned, and who shall be broken alive at the end of the day (...) is not quite acceptable.” Nevertheless, the play was an immediate success. The first evening, the opening play—Esope à la Cour, by Boursault—had to be interrupted as the audience clamoured for Cartouche ou Les Voleurs. In spite—or because—of this popular success, both plays were stopped by the police after a dozen of representations. But it was already all about this flamboyant thief, and people were ramming Le Châtelet to catch a glimpse at him. Barbier himself gave in to the temptation: “To add to impertinence, the little play Cartouche is printed. I bought a copy, as well as the death warrants of the broken, to testify of the foolishness of our country.” Thus, our little book ended up in the famous Barbier’s bookshelf! In the “foolishness” section, all right—but still.

The play takes us to the heart of a deregulated society and the author purposely confuses the issue. Who are the “thieves” of the subtitle? The “Cartouchians”, who rob a bourgeois in the street, or the same bourgeois, who offered the hand of his daughter to a man before “selling” her off to a highest bidder? The “Cartouchian” who steals the wallet of a passer-by? Or the latter—an aristocrat—,who earns a living by suing people, robbing them under the cover of the law? Legal doesn’t mean elegant. And who is the guarantor of moral values? The bold Cartouche, who exhorts his men to die “guns in hands”, or the Exempts who jump on the floor when they hear a gunshot? Even the “mouches” (informers) are triple-crossers! When a thief shows one to Cartouche, the latter answers: “He’s one us, he gives the police wrong information and keeps us informed on their doings. (...) This “mouche” is an honest man.” Well, he doesn’t appear less honest than any magistrate of the tile. After all, Gripaut, a former convict who joins the “Cartouchians” in the play, is about to buy a charge of Public Prosecutor. “After robbing people in so many ways in my life," he states, "I want to crown my career by becoming a Prosecutor.”

Antoine Garnier probably belonged to the powerful dynasty of the Garniers-Oudots, who made their fortune publishing peddling books during the 17th century in Troyes. The grey-blue papers they were wrapped with, gave the name of the “Bibliothèque Bleue” (or the Blue Collection). The first Garnier was Claude (circa 1535-1585); he was located in La Petite Tannerie Street, Troyes. His apprentice, Jean Oudot, later married his daughter and took over the printery when he passed away.