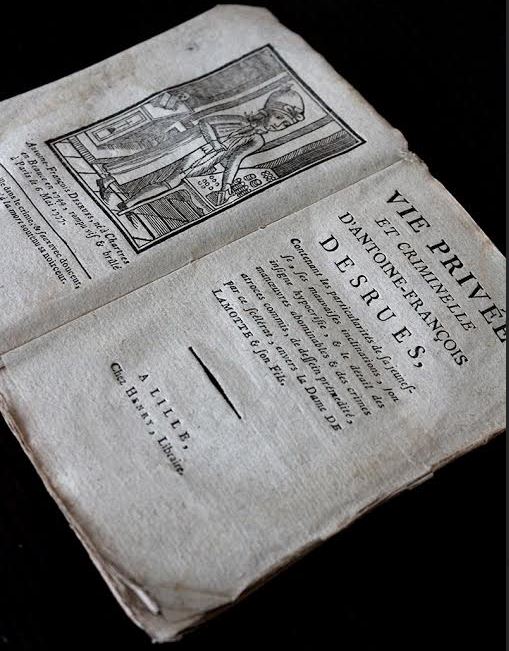 Nobody knows about Antoine-Francois Desrues (1744-1777) nowadays. Yet, he once stood among the most notorious French villains. The story of his life even made it to the peddling books—some small and attractive books that dealt with nothing but bankable topics—at the turn of the 19th century. He was just another villain, who had murdered a woman and her son to rob them. But was he as hated as some publications pretend? And how come so many engravings linked to his petty crimes were printed? Looks like all these suspicious details lead us to... the police of books.

On May 6, 1777, in Place de Grève, Paris, Antoine-François Desrues went to death with fortitude. “As his legs were being tied,” reads Vie Privée et Criminelle d’Antoine-François Desrues (Cailleau, 1777), “he asked the executioner (the famous Sanson—editor’s note) to make him suffer as less as possible, and then he courageously lay on the cross of St. Andrew. (...) His face had hardly been covered up with his gown that his arms, his back, his legs and thighs were broken. He squealed a little, but ceased after the ninth strike.” Apparently, Desrues was not totally dead when thrown unto a stake and burnt to ashes. But our author, André-Charles Cailleau, shows no compassion: “Thus, this abominable destroyer of mankind received the due punishment for his crimes, the worst ever since the beginning of time.”

Damned! The worst ever? Desrues had poisoned an aristocrat, Madame de la Motte, and her teen-age son to get a hold on her valuable property, burying her body in a cave. This is a terrible thing to do, no doubt; but clearly not the worst crime in the history of mankind. On the contrary, the public was probably not that horrified by the murders of two aristocrats on the brink of the French Révolution (1789). So, could this open exaggeration (among many others scattered all through the story of his life) be a deliberate attempt at darkening him? That’s what some modern historians think. In Cailleau’s book, Desrues is depicted as a “monster”—including physically, as he is said to be a hermaphrodite—, a “villain” who had “vicious inclinations” from his youngest age; worst of all, he was a “Tartuffe”, or fake devout. An epitaph printed on the front page of Vie privée et criminelle..., reads: “Peaceful in crime and mildly false, he up to his death stuck to wickedness.”

There are two main books about Desrues’ life, and they both depict him as a monster. The first one is entitled Vie de Desrues (Paris, Thiboust’s widow), and the second one, which became more popular, is Vie Privée et Criminelle de Desrues (Cailleau, 1777). But they are almost the same. In Année Littéraire (Paris, 1777), Grosier and Fréron write about the Cailleau edition: “The title itself should warn us about this book. What is the meaning, indeed, of ‘criminal life’? It is the pale copy of another Life of the same villain (...), which was written by a famous author, whose work is here curiously disfigured by a plagiarist.”

One thing is for sure, if we are to believe the amount of engravings and books published at the time, the Desrues’ case made a lot of noise: “Not that much because of his crimes,” writes the French professor Annie Dupart in L’Affaire Desrues, ou le premier tombeau de l’Ancien Régime (CAIRN). “But rather because they had a strong impact on the public, quite willing to side with the criminals anytime the police and justice hit the streets of Paris.” According to her, the people saw Desrues as a sort of avenger, who “had tried to take the goods of an aristocrat a little bit too soon—just ten years before the Révolution.” Furthermore, just like Cartouche and Mandrin, Desrues was later used as a tool of propaganda by the revolutionists, since stealing from a thief—meaning an aristocrat—was an act of social justice. One man, who knew the people of Paris well, might have foretold the importance of Desrues’ case in these times of social unrest. His name was Jean-Charles-Pierre Lenoir, and he was the powerful Lieutenant of Police. “The ambivalent feelings of the public towards Desrues,” goes on Annie Duprat, “pushed Lenoir (...) to order a series of libels and engravings dedicated at exposing the darkness of his soul.” To create a monster, Lenoir apparently called upon a few printers.

The police underwent crucial changes during the 18th century, as they started to use manipulation and misinformation in their enquiries—as in Cartouche’s case. Printing propaganda books and engravings had become one of their regular weapons. Thus, the impressive amount of publications linked to Desrues appears quite suspicious. In Manuscripts Upon Papyrus, Vellum, and Paper... (London, 1843), Thomas Thorpe lists many of them, including a series of “one hundred and twenty (!) curious portraits and plates, with duplicates of some in colors.” The Cailleau edition of Vie privée et criminelle...potentially came with 39 engravings plus a frontispiece, all signed Esnault and Rapilly.

But what makes Annie Dupart think that Lenoir “ordered” their printing? Joined on the phone, she confesses: “Well, there’s no proof of it. First, the archives of the police were burnt during La Commune, in 1871; then, I guess Lenoir was clever enough not to give written orders in that kind of matters.” Let’s bear in mind that Lenoir was also controlling the police of books. But did he really order Cailleau or Thiboust’s widow to publish the life of Desrues? This type of book was selling quite well, the publishers probably waited upon no one to put them out. What about these obvious exaggerations, then? Well, the assigned authors of these ill-considered works, usually some second-hand writers, had little glory to expect from them; they never signed them, and they probably rushed their work so it might come out shortly after the execution.

The Thiboust’s widow edition has since been credited to Baculard d’Arnaud (1718-1803), once a protégé of Voltaire, but who, “in 1777, aged 59, was writing books like Vie de Desrues... to earn a living,” underlines A. Fouquier in Causes Célèbres (Paris, 1862). He adds: “We can imagine the inconsistency of such a trivial work, hastily written for a publisher who expected to capitalize as soon as possible on the public’s interest.” Cailleau, for his part, is commonly credited for both the publishing and the writing of Vie privée et criminelle de Desrues..., tough no one really says on which ground. Their styles lack subtlety, and they use sensationalism to give life to their stories. Their books are some sort of early tabloids, and educated people had little consideration for them. In their Historical Dictionary (Lyon, 1804), while celebrating Nero or Caligula, Chaudon and Dandeline reluctantly talk about Desrues. “We would be ashamed of ourselves to feature such an odious article in our dictionary, had not it been by public request; some readers have reproached us to leave some criminals out, who made a small and momentary noise; as if a Historical Dictionary should tell the story of the Grève.”

What is disturbing in the Desrues’ case is the amount of existing engravings. Though sometimes bound in a book, they were usually sold separately. There was a series of more than 100 of them, and at least two “series of scenes telling the principal events in Desrues’ life”. We are almost dealing with comic strips! Lieutenant Lenoir—or the printers—were aware of the fact that most of the French population was then illiterate; drawings were the surest way to be understood. Those featuring Desrues on the stake, or burying his victim, were obviously attractive. But what about the less significant ones like Desrues welcoming his future victim in Paris, the bodies being exhumed, etc? “Well,” says Annie Duprat, “we know that they were printed; but did they sell? Of course, they were very cheap (1) and Desrues’ case was captivating news. The story itself is incredible! When he dressed as a woman, for example, pretending to be his victim to cheat a lawyer in Lyon, or when he poisoned his victim’s son in Versailles, claiming he died from a venereal disease before having him buried under a false name. This is like a thrilling detective novel!”

(1) The edition of 1777 (Cailleau) was sold for 24 sols without the engravings (“to be found at Enaults & Rapilly as well as at Mr. Mondhare”) and 48 sols with the series 39 engravings plus the frontispiece, representing the portrait of Desrues.