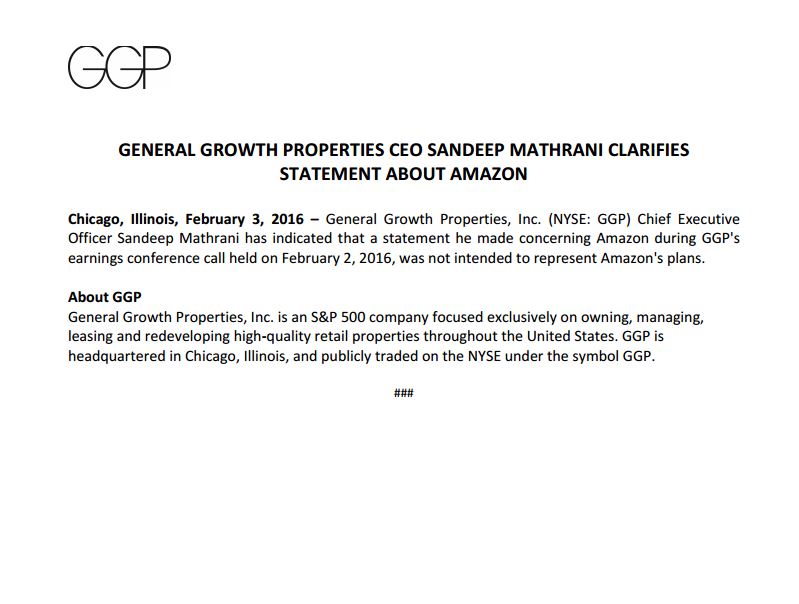 GGP offers a "retraction," sort of...

Is Amazon really going to open 300-400 bookstores? Isn't Amazon's success based on not having to pay the costs of physical stores, allowing them to undercut everyone else on price? Late last year, Amazon did open a bookstore in its home city of Seattle. No specific reasons were given, and it is probably too early for them to have reached long-range certainty as to its success. Is this rumor accurate or just another rumor?

Here is how it came about. The speculation started from an offhand remark by the CEO of a company that owns and manages real estate, shopping malls in particular. During the Q&A of a quarterly session with stock analysts, General Growth Properties CEO Sandeep Mathrani was talking about holiday mall traffic and how retail stores facilitate returns when he blurted this out: "...you've got Amazon opening bricks and mortar bookstores and their goal is to open as I understand 300 to 400 bookstores..." No one had ever heard such a number before. Amazon has one bookstore, and help wanted listings in the San Diego area imply they may be looking to open a second, but it is a long way from 2 to 300-400. Amazon has been tight-lipped in its plans, and such a comment from someone else might not have caused such a stir. However, Mr. Mathrani runs a company that leases space in shopping malls. Presumably, he knows more about retail plans than the rest of us. Where did he get his "understanding?"

After all the fuss he created, Mr. Mathrani quickly issued a retraction. Or did he? The company issued a press release the following day stating, "General Growth Properties, Inc. Chief Executive Officer Sandeep Mathrani has indicated that a statement he made concerning Amazon during GGP's earnings conference call held on February 2, 2016, was not intended to represent Amazon's plans." Note the wording. He did not say his statement did not represent Amazon's plans. Instead, he only said it was not intended to represent Amazon's plans. That is hardly a denial. Clearly, his intention was to convince stock analysts and investors that things are going well with the company's store leasing business. Amazon was simply an illustration to support that intention. This does not mean that Amazon is going to open stores or that his "understanding" is correct. It more sounds like Mr. Mathrani still expects Amazon to open a bunch of stores, but he is trying to walk back his public announcement of that expectation, which probably did not please the executives at Amazon who like to keep their plans private.

The question remains, if the rumor is true, why is Amazon doing this? Amazon totally rearranged the bookselling business, at least when it comes to new books, two decades ago when it began selling books online for discount prices. They would throw another wrench in that business when they pioneered sales of electronic books and readers. Their influence was not as great with older books, particularly collectible ones, as stocking items that may be one-of-a-kind, have a slow turnover rate, and can't be bought from the manufacturer, is not a model for a business that thrives on low margins and high volumes. However, they did begin selling books on behalf of independent dealers, and half a dozen years ago bought the largest cooperative bookselling site, AbeBooks.

Meantime, Amazon expanded from being the largest bookseller to being the largest online seller of practically every product known to man. So, perhaps the plan is to become the largest bricks and mortar retailer too. Who knows? Maybe they will destroy Walmart the way they destroyed many other retailers. The good news is, the nature of the collectible book trade makes it such that those in the rare book business will not be battered the way Barnes and Noble and Borders were. Rare books just aren't a high volume, mass market item. Meanwhile, it's nice to note a valuable lesson from Amazon's journey – if you are a bookseller, the sky's the limit!