AbeBooks: Committed to Rare Books and Encouraging the Next Generation of Collectors 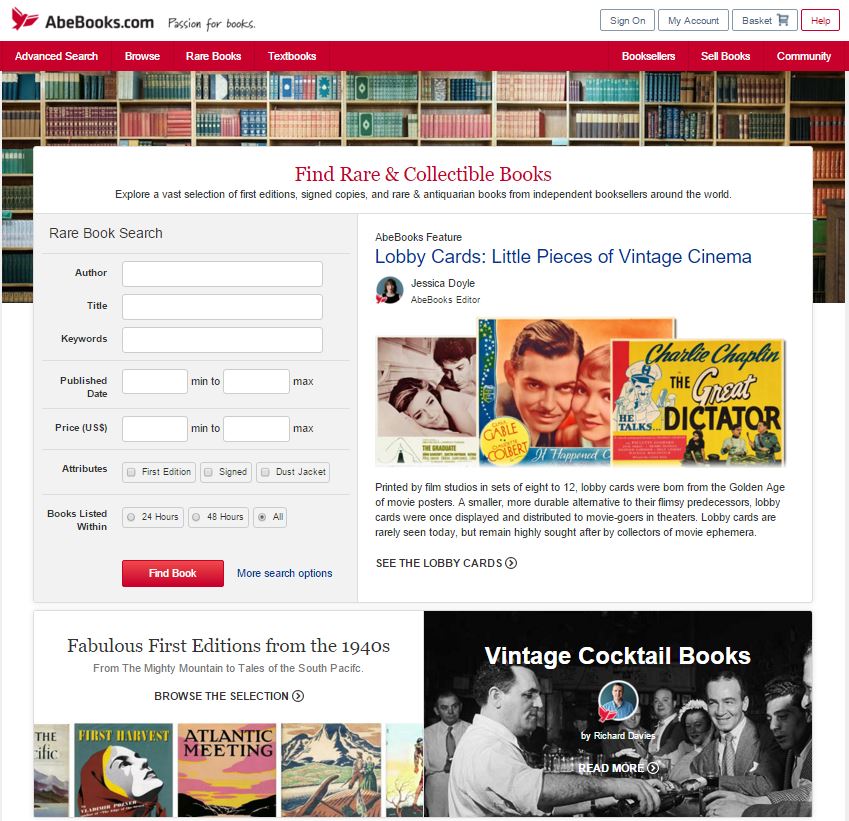 AbeBooks, the book listing site or "aggregator," appeared twenty years ago and quickly became the leader in the online revolution in bookselling. It's every move was debated, analyzed, and controversial to at least someone. Today, it has become a ubiquitous part of bookselling. It is often taken for granted. AbeBooks has become, to many, what physical bookstores were to an earlier generation of booksellers. They might print catalogues, attend shows, advertise in trade publications, but practically everyone had a physical store. It was the starting point of bookselling. Today, many booksellers do not have stores, and for some that do, they are more storage facilities than their major means of selling. AbeBooks has in a way taken on that role. How ever else they sell books, for most booksellers, having a presence on AbeBooks is now the basic starting point.

With AbeBooks' every move no longer the focus of intense scrutiny, we checked in recently to find out what is going on there. It turns out a lot. While AbeBooks does not release sales figures or number of listings, Richard Davies, PR & Publicity Manager for the firm, does reveal that its listings continue to rise, but then adds, "However, quality and breadth of inventory is just as important to us as quantity. Quality means detailed descriptions, helpful photography and pricing that appeals to customers. Breadth means that we want every single edition of a particular title – from the Ukrainian translation to the illustrated picture book edition. Breadth also comes from having booksellers of many different types from many different countries operating in the marketplace."

In 2008, AbeBooks conducted a survey of its sellers. At that time, the major demographics skewed older (45+), better educated, and had come to the field from other professional jobs. We asked whether that has changed. Davies responded that they have not conducted any similar surveys since that time. He does believe that many of those "baby boomer" booksellers are still with them, but many are retiring. "Today, we see a wide range of seller types – sellers who left us and then returned, people completely new to online bookselling, traditional used bookshops, home-based sellers, small presses, and younger sellers who are very Internet-savvy and selling on as many Internet platforms as possible."

While the bulk of AbeBooks' sales, particularly in unit volume, may be books for reading or school, the collectible part of the market is considered essential to the company's success. Mr. Davies explains, "In recent years, we have made no secret that rare booksellers are extremely important to us. We do not take them for granted. The rare and collectible sellers help make AbeBooks different to other online marketplaces. They have the capacity to bring unique items to our marketplace and that’s exciting for us and the customers. This focus on rare and collectible sellers will continue."

AbeBooks has a section of its website dedicated to rare books (see the image above). It includes a separate search for rare books, which immediately offers more selection choices, such as publishing date to target older editions, and weeds out the penny books to make it easier for collectors to find the type of books they want.

However, this still leaves the most vexing of questions for those in the rare book trade – from where will the next generation of collectors emerge? Book collectors, like many dealers, tend to be an aging lot. We asked Mr. Davies what the age was of their rare book buyers, and where new collectors could be found. He answered that AbeBooks does not ask buyers their ages, but did point to where they are finding many new buyers. He explained, "It’s important that we move away from thinking that collectors are going to be in New York, Los Angeles, London and Paris and so on. We see high-end rare book-buyers from the likes of Russia, China, South Korea and South American countries. Online rare book-buying is global – that’s an opportunity for us."

Mr. Davies also explained that AbeBooks is not being passive about enticing new collectors into the field. This may be the most interesting part of our interview, as so many booksellers feel helpless in knowing what they can do to encourage the badly needed next generation of collectors. Mr. Davies explains, "We try to develop new collectors by turning existing customers, who are avid readers, into entry-level collectors. Our email campaigns introduce collectible books, at affordable prices, to customers who are clearly dedicated readers. We want to shift them into thinking about the book as an object and not just for its content. For instance, signed books are an effective way of developing new collectors as a signed book’s value is easy to understand.

"Another aspect to winning new collectors is offering educational content such as a basic guide to book collecting. We try to avoid jargon and explain the significance around illustrators, bindings, scarcity and other key factors. Sometimes there is a background story behind a book’s significance and our merchandising pages often try to tell those stories."

Finally, we asked Mr. Davies what has been happening recently at AbeBooks, and what plans are on tap for the future. It turns out, there is much happening, even if it isn't all as visible as it once was. Rather than paraphrase his answers, we offer Mr. Davies' written reply, complete with explanatory links. AbeBooks will not be sitting on its laurels, but continues to innovate as it seeks to move its own business, and the book trade in general, forward. Here is his answer:

"In November, we relaunched ZVAB.com, our marketplace serving German language countries, on the same technology platform as AbeBooks. We acquired ZVAB in 2011 and it had been challenging to maintain two platforms using different technologies. We used this opportunity to introduce many improvements to ZVAB’s website, including mobile-friendly pages across most of the site.

"On AbeBooks, we introduced redesigned homepages in October. The homepages communicate our brand much more clearly and we have been able to feature booksellers more prominently thanks to the larger imagery. That helps to show we are a marketplace for people who are visiting our site for the first time. We have featured a wide variety of sellers on the new homepage since October including respected sellers like the Brattle Book Shop from Boston, Raptis Rare Books from Vermont, Eureka Books from California and many others. Again, the changes were also designed to improve the mobile experience for people on smartphones and tablets. We will continue to invest and improve the mobile experience across the site as so many customers are now choosing to shop in this way.

"Earlier in 2015, we introduced two new sort orders on search results where customers can sort by earliest and latest publication dates. The earliest date is particularly helpful for collectors who are looking for the first appearance of a book.

"Notable plans for the future include considerable investment of time and resources into the rare and collectible sector. The merchandising team has begun to experiment with content that showcases ephemera and other non-book inventory. We are very aware that many rare and collectible booksellers offer a diverse variety of collectibles besides books. These are often difficult to find on AbeBooks so we wish to do a better job of exposing these items. So far, we have experimented with vintage posters, rare Hollywood photography, cinema lobby cards, and lithographs in the past few months. This is a learning process for us.

"During 2016, we are making a major effort to advertise at fairs where you will find rare books, ephemera and specialist book types. Last year, we advertised at around 15 events worldwide and that figure will be far higher in 2016. In February we advertised at the LA Art Book Fair and we’ve committed to supporting March’s Florida Antiquarian Book Fair. We will be visible at many more events as the year progresses."