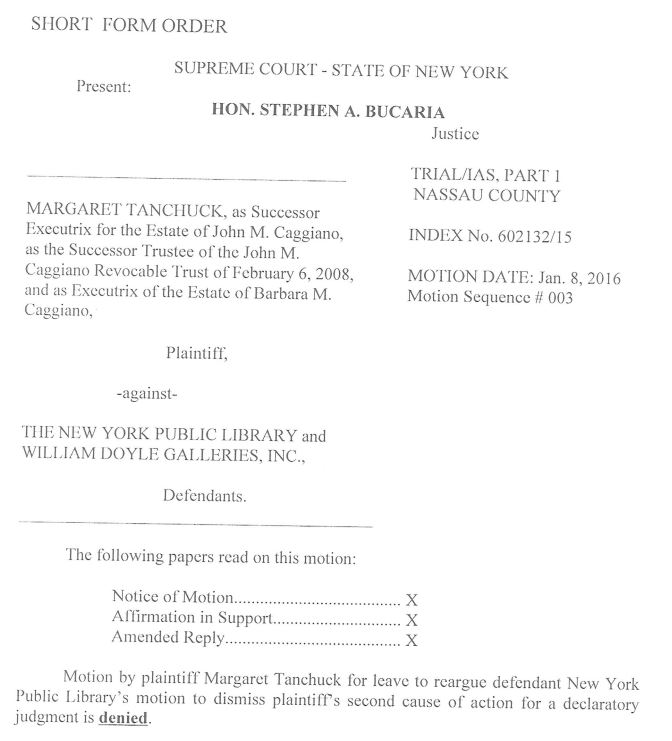 The New York Public Library recently survived a round in its attempt to recover several books almost certainly stolen from it decades ago. The current possessor's attempt to have the library's claim for the books dismissed on statute of limitations grounds was denied by the New York State Supreme Court on January 8. The legal justification for the dismissal was bizarre, though it is hard to argue with the fairness of the result.

Last spring, Margaret Tanchuck approached Doyle New York, the auction house, with some impressive books. She was interested in an appraisal and possibly a sale. There were seven old bibles, but even more important was a manuscript workbook from Benjamin Franklin's printing house from 1759-1776. It could be worth seven figures. There were also some obvious problems with the books. They contained markings of the New York Public Library. One had an ownership stamp of the library inside, others the library's call numbers on the spine. Doyle quickly contacted the New York Public, Mrs. Tanchuck says with her permission, to inquire whether these items had indeed been sold or legally deaccessioned.

It didn't take long for the New York Public Library to say "no way." They had not been sold or otherwise intentionally released. However, the library was not aware that they were missing. In looking through their records, they concluded that the items departed the library sometime between 1988-1991, but no one there had ever noticed. Mrs. Tanchuck did not shed much light on how they exited the library either, only confirming the timing and describing how they came into her possession.

Mrs. Tanchuck inherited the books from her father, John Caggiano. Mr. Caggiano operated a jewelry store in Glen Head, New York, but also traded in other valuable items. According to Mrs. Tanchuck, sometime around 1990, her father told her he had some valuable books in his store, and mentioned them a few more times over the years, but never disclosed how he came to have them. Mr. Caggiano died in 2009.

One can only speculate how Mr. Caggiano came to possess these books. Obviously, he did not buy them from the library, and the odds that they were accidentally thrown away are less than slim-to-none. There is nothing in Mr. Caggiano's background that would suggest he was a thief, and the fact that he never attempted to remove the library markings or make any money from them indicates he was not in the business of stealing books. However, it does not appear unreasonable to think he was aware that not all was on the up and up based on his never attempting to sell the books, display them, or tell his family much about them. He appears to have treated the books as if they were "hot."

Based on his business, and the way he treated the books, we might guess that he purchased them for a ridiculously low price from someone else who knew they were stolen, either the thief or someone who obtained them from the thief. We have no evidence to support this guess, but it seems the most logical explanation to us. We might also note that Mrs. Tanchuck may have had serious doubts about the legitimacy of her father's possessions as she did not list them among the inventory of her father's estate presented to the Surrogate's Court in 2013.

The New York Public Library demanded Mrs. Tanchuck return the books. She declined. The library said she demanded a large sum of money to give them back. The library contacted the U. S. Attorney who seized the books. This lawsuit, in which the library prevailed, was an attempt by Mrs. Tanchuck to get a declaratory judgment that the library's claim was barred by the stature of limitations. That statute provides that an action to recover property must be commenced within three years of it being missing. Clearly, these books left the possession of the library way more than three years ago.

However, one exception established in the case law prevented the stature of limitations from running for many years, and herein lies what is truly bizarre about the law in this case. The case law provides that if stolen property is in the hands of a good faith purchaser, the statute of limitations does not begin to run until the real owner demands the goods be returned, and the possessor refuses to return them. That did not happen until last year, and once the library realized the books were missing, they immediately made a demand for their return.

In other words, if Mr. Caggiano had stolen the books himself and kept his mouth shut, three years later they would have been his to keep. However, since he came upon them honestly (or, at least, there is no evidence that he did not), he does not get to keep them until three years after he has informed the owner he has them. The thief gets to keep the stolen merchandise, while the honest purchaser does not. The Supreme Court pointed out that "the Court of Appeals noted that it was 'seemingly anomalous,' for the cause of action to accrue earlier when the property was in possession of the thief, rather than a good faith purchaser for value. Nevertheless, the Court of Appeals has not changed the rule which applies in those circumstances." Seemingly anomalous, indeed! It is ridiculous.

The court does go on to talk about "equitable principles" in their decision, and you get the feeling they might have found another way to come to the same result if Mrs. Tanchuck had claimed that her father said he stole the books himself. Any other result would be ridiculous, and courts usually don't like to reach stupid conclusions. The law may be an ass, but judges don't much like to look like ones themselves. So, this case will go on, and if I were a betting man, I would put my money on the New York Public Library to get those books back when all is said and done.