The Pirie Sale at Sotheby's Garners Almost $15 Million in Sales 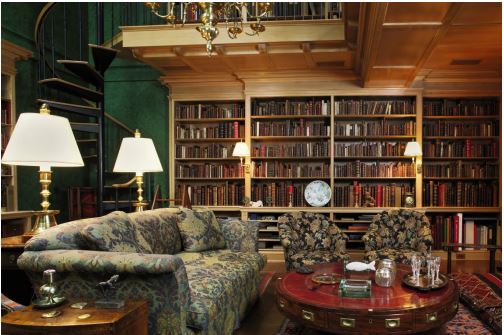 One of the most important book auctions of 2015 took place at Sotheby's in New York in the final month of the year. As can happen when the very best of collections are offered for sale, the figures flew past the estimates of approximately $8-$12 million on the lots that sold, settling at a total of just a hair under $15 million. The sales rate was also unusually high at 85%. Spectacular collections earn spectacular results. The collector of this single-owner sale, who died earlier in the year, was Robert S. Pirie of New York.

Robert S. Pirie made his fortune as a corporate lawyer and investment banker. Born in 1934 in Chicago and educated at Harvard, Mr. Pirie became a force in law, then banking, beginning in the 1970's. Despite his rise into high finance, he was a man of progressive political views, not surprising as he was a nephew of 1952 and 1956 Democratic presidential nominee Adlai Stevenson. It earned him a place on President Richard Nixon's enemies list, which he considered an honor.

Long before his foray into the world of high finance, Mr. Pirie developed a love for books. While serving in the Army in Germany in the 1950's, he found an old book by John Donne. It was the start of a collection of thousands of books, specializing in 16th and 17th century English literature. It included some of the greatest examples in the field. It was book collecting he loved perhaps more than any of his other successful ventures. According to the New York Times, he once said he never intended to be a lawyer. "I wanted to become the rare book curator at Harvard."

The top price at the Pirie sale went to a special copy of Isaac Newton's seminal work on light, Opticks: or, a Treatise of the Reflexions, Refractions, Inflexions and Colours of Light. This was a presentation copy of the first edition, first issue of 1704, given to his colleague and supporter astronomer Edmund Halley, forever known for the comet named for him. Halley has marked this copy with the Latin "luceo," which means "I shine," or "I dawn, become light." Sotheby's noted that the significance of this is uncertain, but that Halley also made the same annotation in his copy of Newton's Principia. Newton had actually begun writing the book in the 1670's, but because of differences with Robert Hooke, waited until after his death in 1703 to publish his findings. In this book, Newton announced his discovery that white light is actually composed of all of the colors of the rainbow, expounding on the refraction and combination of light. He also writes about the telescope and his theory of how light travels. Finally, the book concludes with two mathematical papers, designed to show Newton's priority over Leibniz in the discovery of calculus. Of great importance is Newton's enunciation of his use of the scientific method – observation rather than just reasoning – in reaching his conclusions. Newton explains, "My Design in this Book is not to explain the Properties of Light by Hypotheses, but to propose and prove them by Reason and Experiments." Against an estimate of $400,000-$600,000, this copy sold for $1,330,000.

The next two highest priced items fittingly came from the greatest name in all of English literature – William Shakespeare. One was the 1619 Pavier-Jaggard second edition of the Merchant of Venice, one of only 26 copies known to survive. This edition is notable as it, along with eight other Shakespearean plays, was meant to be combined in a collected issue, just two years after Shakespeare died and four years before the publishing of the First Folio. However, they ended up being sold separately, or perhaps with the expectation purchasers would bind them together. This rare edition sold for $550,000 against an estimate of $250,000-$350,000.

The second Shakespearean item was a copy of the Second Folio. It followed the first by nine years, essentially a reprint of the first. It would be 30 years before another edition was published. The Second Folio includes a poem by John Milton, and as such, it marked the first appearance of Milton in print. It sold for $430,000.

Among other items sold was perhaps the most important of sporting books ever, Izaak Walton's The Compleat Angler. It took in $206,250, two to three times the estimates. A magnificent letter from the man who started Pirie's collection, John Donne, to Lady Kingsmill was sold for $150,000. In it, Donne comforts his old friend who just lost her husband. He assures her that God reunites such partners in time in accordance with His plan.