Are Books a Good Investment? This Investment Advisor Thinks They Are 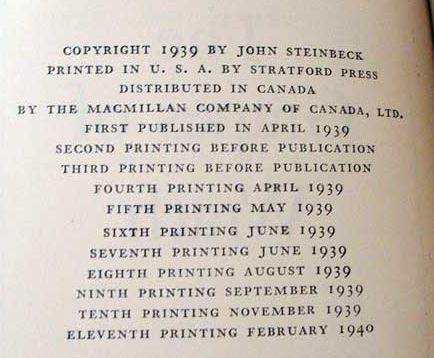 First editions of The Grapes of Wrath can vary widely in price depending on which printing.

A few weeks back, an investment firm in London caused some stir when they published a list of book prices and their increase in values over the past two decades. The gains were quite impressive. Perhaps a few booksellers who have not found it all that easy in recent years to turn high volumes of expensive sales were pleased to hear the good news. Then again, some may have been surprised. Stanley Gibbons Investment, a firm that specializes mostly in investments in stamps and coins, reported books had increased in value by 398% over the past twenty years, and 8.8% per year over the past ten years. We found that last decade particularly surprising as it included some very difficult economic times.

Gibbons created their index using 30 books. It should be noted that these are generally important books. The list contains names like Hemingway, Tolkien, Wells, Orwell, Eliot, Joyce, Kerouac, Milne, Salinger, Rand, Fleming and Steinbeck. Only one item of nonfiction was included, from economist John Maynard Keynes. All authors were from the 20th century. This is a fairly targeted field within the category of rare and antiquarian books.

It is not clear how their prices were determined – from actual sales, offering prices, something else? Presumably, copies compared were reasonably similar – same editions, each "of a certain condition" (their words), "the dust jacket still intact." We also do not know whether this list was randomly generated, or pre-selected in accordance with some bias or expectations.

What struck us was that our own sense of the market is that it has not grown at quite such a spectacular rate. So, we looked at our own index. The Rare Book Hub has compiled a database of over 6 million auction records from the past century and a half, with a particular concentration over the last 15 years. A few million books, covering everything offered at auction, it would seem, might give a better view of the overall market than 30 books from noted 20th century fiction writers. Indeed, these numbers were significantly different from those compiled by Gibbons. They show the average price of books at auction has doubled, rather than quadrupled since 1995. More significantly, they have shown virtually no movement in the past ten years, as opposed to appreciating 8.8% per year.

This is not because prices have stayed flat for ten years. The first two years of this period showed significant gains. Then there was 2008. We cannot forget 2008, however much we might like. Prices tumbled the year of the Great Recession, and inched down a little more the following two years before starting their journey upward again. When all was said and done, prices were virtually the same as they had been ten years earlier.

Now, our method of comparison may elicit a few questions too. Gibbons was presumably comparing exact same books, the ideal way to compare prices. However, their sample was tiny and not representative of books in general. Our sample did not contain exactly the same books year to year. However, we believe that, as with polling, when a sample is large enough, it will all balance out. Our samples for each year included several hundred thousand books.

We next took a look at a few of the books Gibbons estimated to see whether their estimates were consistent with auction realizations. We looked at average prices in 2015 and 1995 (sometimes a year before and/or after too to get a representative sample). For the most part, Gibbons' estimates for gains were somewhat more generous, but in the ballpark. We used first editions, very good or better condition, but without special attributes such as inscriptions. Here are our comparisons.

Gibbons showed the largest gain of their 30 selections over the past 20 years belonged to Animal Farm, George Orwell's barnyard tale first published in 1945. Gibbons used British pounds, which we have converted to U.S. dollars for comparison sake. They showed a gain of 2,597%, from $289 to $7,800. Our records indicated a gain of 1,885%, from $228 to $4,300. One might surmise Gibbons used only copies even better than our very good-plus since prices were higher, or perhaps they used prices from venues other than auctions. While Gibbons showed a greater rate of appreciation, which one might expect from the best of the best copies, there is nothing wrong with 1,885%. Animal Farm was a great investment in 1995. The Dow Jones average appreciated 250% over the same time period.

The final title we examined was #10 on their list, John Steinbeck's 1939 tale of the Great Depression, The Grapes of Wrath. Here we did not match Gibbons' results. They showed an increase of 527%, from $1,497 to $9,383. We could only manage a return of 83%, from $1,467 to $2,683. Why the difference? There are two possible explanations, one specific to this title, another more general. First editions of The Grapes of Wrath have the same variable as Gone With The Wind – there were a whole mess of printings of the first edition. There were 11 printings of the first edition, the first ten of which may be unclear without seeing the book as they are all dated 1939. The first printing is very valuable, the drop off steep from there. Most listings did not specify the issue. Gibbons' estimates may rely primarily on first issues. The 1995 auction records, perhaps, contained more unidentified first issues than did the 2015 listings. This is why book evaluation is part art as well as science. There are many variables, some of which can easily be overlooked if you are not expert.

Then there is the valuation issue that affects almost all 20th century books. It is not much of a stretch to repeat the joke that 90% of a book's value is determined by its dust jacket. No one is paying much attention to less than very good-plus copies of the book, but condition of dust jackets are all over the place. They do not hold up so well, it being rare to find one on a book 85 years old without some sort of problems. A few tears, chips, missing pieces from a dust jacket can have a major impact on a book's value. Gibbons speaks of dust jackets being "still intact," but that leaves a lot of room for variation.

One thing we can say with certainty is that if you bought a first printing in 1939 and kept it in fine condition, you made a killing. These estimates imply an increase of value between 97,500% and 341,200%, though if the condition is pristine it is likely even more. The original price was $2.75.

In announcing the index, Gibbons stated, "The index will help guide investors and collectors looking to build a rare book portfolio as part of a long-term investment strategy." Have they made their case? Hindsight is wonderful, but was the explosion in interest in Fleming, the spectacular increases for Animal Farm, obvious in 1995? Why didn't I keep the comics books I owned as a youngster if this is all so obvious? Gibbons' 20 years after-the-fact selections were very good, but would they have chosen this list to follow in 1995, or would there have been more duds? I can tell you which stocks you should have bought in 1995, but I can't tell you which stocks you should buy in 2016. Remember, our comparison of all auction results to some of Gibbons' selected titles showed their books significantly outperformed the market as a whole. How do you know which are the right ones to choose? If rare books are to be part of your long-term investment strategy, you need to be very familiar with the books you select, understand pricing, have good insight as to where the market is likely to go in the years ahead, and not be risk averse.

This brings me back to a statement made by Arnoud Gerits, President of ILAB (International League of Antiquarian Booksellers) a few years back. "The International League of Antiquarian Booksellers does not encourage collecting books for investment purposes," the League's President said. "The reason for collecting is love and interest in the subject, the author, the period, what the book represents, the love and desire to own the original or best edition of a particular book... If, and I say if, it is an investment, than it is a long-term investment, a savings account, and you use money that you’re sure you won’t be needing for a long, long time, and nobody guarantees you anything. If you’re looking for a quick return on investment, forget it. The bottom-line is: don’t buy them as an investment: it is the wrong angle to look at books."

Unless you have exceptional insight into book values, Mr. Gerits is, in my opinion, correct. It is undoubtedly possible to make money investing in books, but it surely is not easy. However, the inspiration for most people to collect books is that they love them, not because it is an investment. We spend lots of money on things we like without expecting to make a profit. In fact, we usually expect a loss. No one buys a new car, television, or electronic gadget expecting to make a profit. Other pleasurable expenses, such as fine dining or a vacation, will leave you with nothing but memories. Anyone who refuses to take a vacation because it isn't a profitable financial investment is throwing away much of the enjoyment in life, simply to have a larger bank account at the end when they can no longer use it. Penny wise.

Books, perhaps, fit most logically into the same category as real estate. You buy a house because you love it, you will enjoy living there. Still, you want to come out financially whole when you sell. So you buy what you want, but with a certain amount of care. You may pass up the perfect home for one that is just very good because the very good house is in a highly desirable neighborhood, the "perfect" one in an area where values are falling. Investment quality should not be the primary consideration, but it shouldn't be ignored either. You should be able to enjoy your books in a way you will never enjoy your stock certificates, but still have no regrets at the end.