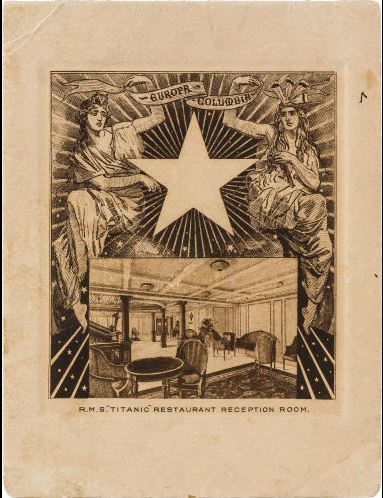 #275 - the last supper – dinner menu from the Titanic's final night (from Heritage Auctions).

The close of another year gives us a chance to look back at the Rare Book Hub Top 500 prices paid at auction in the books, manuscripts and ephemera field for 2015. These annual lists help us understand what is popular today, particularly among the highest end of collectors, and to take the pulse of the market. Here are a few things we found.

For the first time since 2012, the top item fell just short of reaching eight figures. However, the most expensive piece is not indicative of much other than how badly someone wanted the most desired item offered. More indicative of the market is how great the price still is at the 500th most expensive item. For 2015, that number was $74,200, down from $79,800 (7%) the prior year. Next month, we will have a chance to get a broader look at what happened at auction in 2015, but this implies some market softness in the past year after a major gain in 2014.

Last year saw a return of many great literary names to the Top 500, though not always their books. There has been a trend toward more interest in manuscripts and other often unique ephemeral items. Top dollar is as likely to go to a letter from the author or an original manuscript copy versus a first edition of the book itself. Books are found in healthy numbers on this list, but so are manuscripts (particularly pre-Gutenberg illuminated manuscripts), plates from books, maps, posters, photographs, and almost unheard of a decade ago but common today, comics. Unlike a few years ago, they are not just first issue comic books, but the original boards used to create them. These are sort of the comic equivalent of a book's original manuscript or typescript. We wondered whether comics should even be included in the books and paper field, but they are certainly works on paper, and leaving them out would leave an incomplete picture of what is selling today.

At the end of this article, we will provide an explanation as to what sort of material qualifies for this list.

Who was the most popular collectible author in 2015? The top two from 2014 exchanged places. John James Audubon is on top with 12 appearances on the list. Along with his complete books, single plates from the double-elephant folio first edition of his Birds of America continue to bring huge prices. Slipping back from first to second, with only 10 appearances, instead of 14 like last year, is Belgian George Remi, better known as Hergé. That one may leave Americans scratching their heads. Hergé was the creator of the French comic Tintin. Americans are probably wondering what it is about Tintin that leads Europeans to spend so much money on its boards, but Europeans are probably wondering what on earth leads Americans to spend so much on bizarre, often violent superhero comics. I can't explain either.

Perhaps somewhat similar is the type of broadsides/posters found on this list. They are not so much announcements of historical events as they are posters for famous movies. Once again, pop culture trumps reality.

As for the most popular book on the list, the runaway leader was Charles Darwin's On The Origin of Species. It appears five times in the Top 500, one of eight Darwin items found. Obviously, it is more important than rare.

Here are a few of the names you will find this year. From the world of literature and poetry we find Fitzgerald, Orwell, Dickens, Proust, Villon, Eliot, Voltaire, Kafka, Grimm, Milton, Racine, Twain, Shakespeare, Hugo, Donne, Coleridge, Baudelaire, T. Williams, Chaucer, Dostoevsky, Mallarmé, Stendahl, Wilde, Rabelais, Dante, Joyce, Jonson, Cervantes, La Fontaine, Poe, de Sade, Balzac and Tolkien. Are there a surprisingly large number of French authors this year? This was the year of the first Pierre Bergé sale, approximately $13 million worth of books with a decidedly French orientation.

#450 is a manuscript map by someone in British General Burgoyne's army of part of the site of the Second Battle of Saratoga in 1777. American forces led by Generals Gates and soon-to-be traitor Arnold defeated the British, preventing their plan to split the nation in half along the Hudson River and secure a quick victory. $81,250.

#416 - The Kelmscott Chaucer, the greatest private press book ever printed being no match for dozens of comics and movie posters. $86,655.

#275 - A dinner menu from the final night of the Titanic in 1912. It was a very good meal, but not good enough to justify the trip. It is signed by five salesmen, first class passengers, which is why four of them survived. $118,750.

#143 - In a draft of an important announcement he was about to make in 1959, John F. Kennedy writes three pages, including the words, "I am announcing today my candidacy for the Presidency of the United States." For reference, nine Tintin items beat out Kennedy's announcement that he was running for the presidency. $196,000.

#79 – The most expensive of Darwin's Origins. It is a presentation copy, with a secretary's inscription from the author (as with all other presentation copies). $298,000.

#28 - The Beatles first signed contract with Brian Epstein in 1962. As their manager, Epstein would lead the Fabulous Four to unparalleled heights. $551,150.

#14 - A 1937 letter from Communist Chinese leader Mao Zedong to British opposition leader Clement Attlee calling for the two nations to work together to defeat the Japanese who had invaded China. $907,500.

#12 - Eight consecutive leaves comprising the Book of Esther from the "Noble Fragment" copy of the Gutenberg Bible. $970,000.