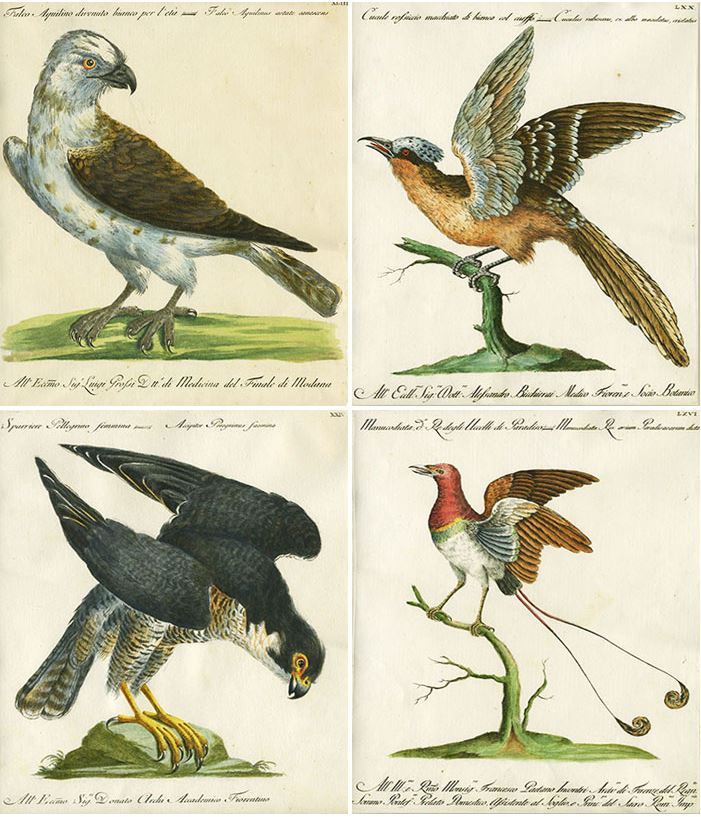 Plates from the Natural History of Birds.

We've all entered our credit card number into an online order form and then, with some trepidation, clicked "submit." How many of us have done so when the amount was $191,000? Someone placed such an order on AbeBooks this past year, and the book tops the list of AbeBooks' Most Expensive Sales in 2015. It was almost three times the price of the previous most expensive item sold on the site, a modest $65,000. There are many people searching Abe for dollar books, but there's another universe out there of serious collectors, the ones for whom AbeBooks offers the option of searching by highest price instead of lowest. Here is the top 10 list of Abebooks' most expensive items sold in 2015.

10. The Story of Project Mercury, America's Man-in-Space Program, by Martin Caidin, published in 1960. In 1957, the Soviet Union launched the first satellite into space. By the following year, an embarrassed American government responded with the initiation of project Mercury. The space race was on. The Soviets would beat the Americans to the first person in space as well in the year after this book was published, but by 1963, when Project Mercury ended, the U.S. had lifted six people into space. This copy was signed by all seven of the first American astronauts, including Alan Shepard, first American in space, and John Glenn, first American to orbit the earth. $18,500.

9. The Holy Bible, published by Mark Baskett in London in 1767. This book certainly needs no introduction. However, the edition needs some. Baskett was the official printer for the King, a position passed down from his ancestors. $18,928.

7. Scenes of Clerical Life, by George Eliot, a first edition published in January 1858. There were 1,050 copies printed in the first edition, but this is one of just eight that were presentation copies from the author. This was Eliot's first book of fiction, published before anyone new that "George Eliot" was a pseudonym of Mary Ann Evans. $20,000.

6. The Grounde of Artes, by Robert Record, published in 1579. When spelling like that is used, you know the book is very old. It was first published in 1543. At least 45 editions had been published by 1699. This was a popular book. It was one of the earliest textbooks in mathematics. Record is recognized as the creator of the equals sign. $22,083.

5. Plantes de la France, by Jaume Saint-Hilaire, published via subscription from 1819-1822. This is a first edition of a spectacular 10-volume botanical set including a thousand illustrations printed in color. $22,549.

4. Sertum Orchidaceum: A Wreath of the Most Beautiful Orchidaceous Flowers, by John Lindley, published in 1838. This is a particularly attractive orchid book containing 49 hand-colored lithographed plates. $24,643.

3. Charlie and the Chocolate Factory, by Roald Dahl, published in 1964. This one ties for second best known book on this list with Tolkien. Ten thousand copies of this first edition were printed, selling out in a few weeks, but very few of them are inscribed by Dahl as was this copy. The bookseller was Raptis Rare Books of Vermont. $25,000.

2. Pangeometria, by Nikolai Ivanovich Lobachevskii, published in Russian in 1856. If you want to look up this 19th century Russian mathematician, be prepared to try a number of other spellings, including Lobachevski, Lobachevsky, and Lobatschewsky. You will need to be an expert in geometry to understand this book in any language. $34,245.

1. Storia naturale degli uccelli... by Saverio Manetti, published in Florence in 1765. The title translates to "Natural history of birds..." This book, commissioned by the Grand Duchess of Tuscany, contains 600 hand-colored plates of birds. This five-volume folio set may have been the most spectacular book on birds published up to that time, anticipating the great ornithology books of Audubon, Gould and others in the 19th century. Antiquarian plate books of birds are very popular today, with individual plates from Audubon regularly selling for enormous amounts. $191,000.

AbeBooks' list of their top 20 sales, plus some very interesting others, can be found at the following link: www.abebooks.com/rare-books/most-expensive-sales/year-2015.shtml