Valuable Map Stolen from Boston Library Returned. One Down, 34 To Go 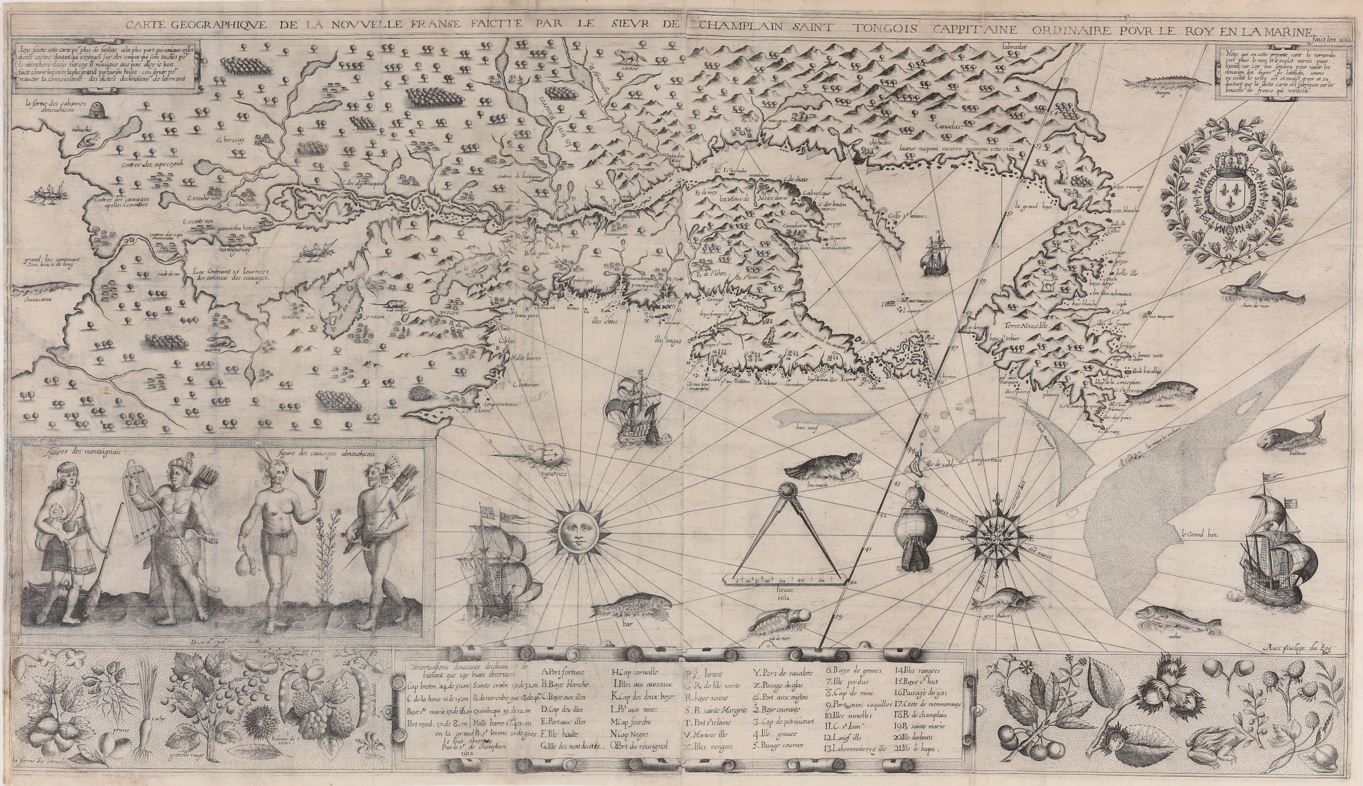 This has been a difficult year for the Boston Public Library. There was the lost, feared stolen $600,000 print that turned out to be misplaced, the resignation of the library's president as a result of that fiasco, a highly critical report on library practices by an outside evaluator, and an attack of mold in the Rare Books Department which forced its shut down for several weeks. So, it is good to see the year end on a high note for the Boston Library. A highly valuable map, missing for over a decade, has been recovered.

The map in question is the Carte Geographique de Nouvelle France and it was being offered for sale by a New York dealer for $285,000. The map had been taken from the book Les Voyages du Sieur de Champlain, the 1613 account of French explorer Samuel de Champlain's early voyages to North America. In 2009, two copies of this book sold at auction, the largest difference being one had the map, the other did not. The copy with the map sold for $780,000, the one without for $68,500. Recovering the map that came with the BPL's copy is a very big deal.

Map theft is the most insidious form of book theft. If a book is missing, librarians should be able to notice. When a map is neatly sliced from the internal pages of a book, only someone very familiar with that book has a chance of noticing, and even that requires a thorough inspection. Whenever this map was stolen, it slipped past the notice of BPL's librarians. In fact, many maps were stolen from books, and they all slipped past the the awareness of the library.

In 2005, Ronald Grim was hired as curator of the library's map center. That was at the time the huge map theft at the Yale University Library by map dealer E. Forbes Smiley was exposed. Smiley dropped a razor blade as he prepared to exit the library. An alert librarian noticed, he was stopped, and Smiley's career as a map thief came to an abrupt halt. Other libraries Smiley had visited began inventorying their own maps. By the time he finished, Grim had discovered that 69 maps were missing from the BPL's collection of books and atlases.

Caught razor-handed, Smiley pled guilty to stealing 97 maps, and received a three-year prison sentence, half of what me might otherwise have received. The FBI was satisfied that he had identified all of the maps he had taken. Others were not so sure. The British Library thought the sentence too lenient. Smiley completed his sentence and was released from prison in January 2010.

This past year, Grim became aware of the map being offered by the New York dealer. It had been advertised in an antiques magazine. There aren't very many copies of this map separated from the book floating around, so he concluded it was worth a look. Fortunately, a digital image had been taken of the Champlain map back in 1992, which the BPL still had. This is an exception. Grim examined the image of the BPL's map and the one offered by the dealer and discovered they had the same markings. It had a few tears and a small hole in specific places. Despite conservation efforts made after the map was taken from the BPL, they were still noticeable. An outside conservator was brought in to examine the images and confirmed Grim's conclusion that the maps were the same. The BPL reported that the dealer, who was selling the map on behalf of a third party consignor on a commission basis, was "fully cooperative" during the process. The map has since been returned to the library and will be on display through February 29 at the Norman B. Leventhal Map Center at the Boston Library's Central Library.

This still leaves BPL with 34 missing maps, and here the outlook is not so bright. Only one of them was photographed by the library. There is no easy way to identify the remaining maps as having come from their books. This is not to say it will always be impossible. There may be matching features between the maps and the BPL copy of the book missing the map, such as folds, stains, or the like. Still, there may be no such identifying markings, making it nearly impossible to demonstrate a match.

The finding of this map should open the door to further investigation, though the FBI seemingly closed that door when they agreed to a plea deal with Smiley a decade ago. Although the consignor has not been publicly identified, the New York dealer knows who he is, and that person knows from whom he purchased the map. This was no casual purchase considering it's value. He has not forgotten. Since this book was last viewed in 1993, and presumably the map was still present at the time, we are not talking about some long chain of provenance that is difficult to trace back. While it is not known whether it was Smiley who took this map and failed to list it in his inventory of 97 stolen items, he would certainly be the victim of a most unfortunate coincidence if it was someone else. BPL records show Forbes Smiley as the last person to view the Champlain book. Indeed, he was last to view many of the 34 books which still have maps missing.

Additionally, there is another copy of the Champlain map missing. Harvard University is missing a copy. Smiley admitted to taking eight maps from Harvard, but they have five more still missing, at least some of which were viewed by Smiley. Smiley did admit to stealing a copy of the Champlain map, but that copy was identified as belonging to the New York Public Library. He never admitted to stealing more than one copy of any map, but this is a particularly valuable map, and librarians at BPL and Harvard have long been suspicious.

Hopefully, a concerted effort will now be made to trace the post-BPL provenance of this map. If it leads back to Smiley, it will show that he was not truthful in his dealings with the FBI. That ought to provide a source of pressure to make him more forthright. It may also help trace where some of the other BPL, Harvard, and other library maps went. If it turns out that Smiley was not the thief, it should enable authorities to determine who was responsible for taking the remaining maps. It will also be very surprising if it is someone else. Very, very surprising.