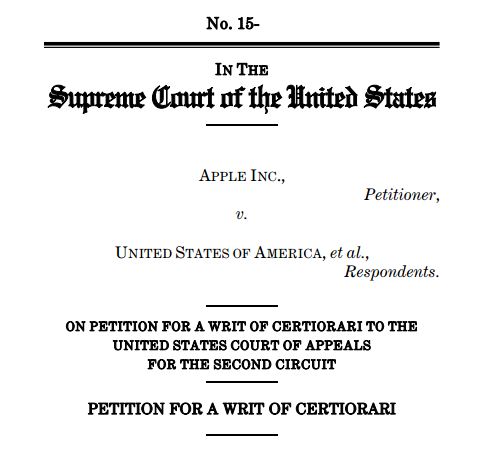 All the way to the Supreme Court.

In a strange continuation of the long-running Department of Justice antitrust claim against Apple and five book publishers for e-book price fixing, Apple has filed an appeal all the way to the Supreme Court. The publishers long ago settled their cases. Actually, Apple did too. It had agreed upon a substantial payment to purchasers of e-books if the Appeals Court decision went against them. It did. Apple appealed to the Supreme Court anyway. It will not reduce their obligations to e-book buyers if they win. That part is over. They are only fighting for the principle now. Only a company like Apple, with its hundreds of billions of dollars in the bank, can take on the expenses of a Supreme Court case just for the principle.

The Department of Justice sued Apple and book publishers Hachette, HarperCollins, MacMillan, Penguin, and Simon & Schuster 3 ½ years ago for a conspiracy to fix prices. Briefly, Apple wanted to begin selling e-books to be used with its new iPad tablets, but did not want to compete on price against Amazon. Amazon was willing to sell books for little if any profit to obtain market share. The strategy was very successful. They dominated the e-book market.

Apple, however, wanted to make a profit. So, it informed the publishers that they would only sell their e-books if the publishers set retail prices at a level higher than those for which Amazon was selling. The exact nature of those discussions is in dispute, but the lower court determined that Apple was the "ringleader" in the process that resulted in more vendors selling e-books to the public, but at higher prices. The lower court determined this was an antitrust violation, and the Appeals Court more recently affirmed that opinion.

A per se ruling is where the basic activity is such that guilt is presumed. If horizontal entities, such as the publishers, get together, and at the end, they all agree to raise prices, a court will find per se they conspired to fix prices. They won't acquit on the basis they don't have testimony of what exactly transpired in that backroom. They know darn well.

However, a previous Supreme Court ruling said that, at least in some cases, a "rule of reason" needs to be applied for discussions between vertical players. It's not so obvious that a price-fixing conspiracy is taking place when non-competitors' discussions, such as those between Apple and the publishers, take place. This is true even if the various horizontal parties (the publishers) together raise prices. There may be a per se conclusion of a price-fixing conspiracy among the publishers, but not one between Apple and the publishers.

Two things happened as a result of whatever occurred here. One can be viewed as anti-competitive, the other as pro-competition. All of the publishers raised their prices to the same level. That sounds anti-competitive. On the other hand, more companies began selling e-books. Amazon's market share dropped from roughly 90% to 60%. That sounds pro-competitive. I think Apple may have a shot at this one, even though they are 0-2 so far. The Supreme Court sometimes sees things differently than lower courts that are dealing more with the personal side, witnesses and all, than simply legal arguments. Apple may yet win the case, but the e-book buyers, beneficiaries of the earlier agreed upon settlement, have already won their money.