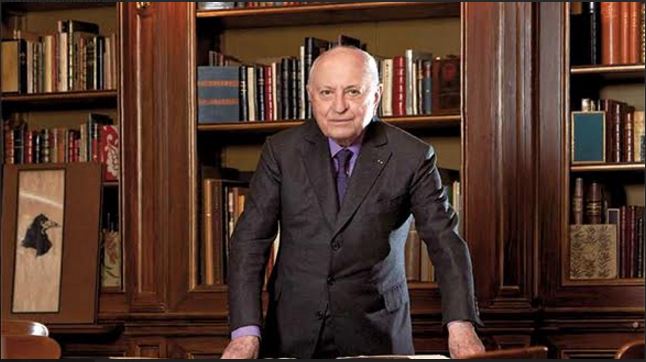 The first sale of Pierre Bergé’s collection was a success as it generated 11.7 millions euros. But are the exorbitant prices of these books a good omen for the future of old books?

«Yes, the sale was a success and Pierre Bergé is very happy about the results,» confesses Benoit Forgeot, the main expert for the sale. The first of the six auction sales took place at Drouot’s on Friday, 11 December, and the room was so packed it was almost impossible to come in. Many prestigious people attended, including the French thinker, Alain Minc, who is the administrator of the Foundation Pierre Bergé-Yves Saint Laurent, and the controversial Jean-Claude Vrain, involved in the Aristophil scandal—a 800 millions euros bankruptcy over old manuscripts with 18,000 abused investors. Many influential people had left absentee bids while others anxiously waited over the phone or behind their computer screens. Pierre Bergé was in a nearby building, closely following the sale. The atmosphere was good, according to our expert, but it was actually a little tense as a lot of money was at stake. Pierre Bergé, said to be a tough man, was very demanding, especially as far as appraisals were concerned. «He required that they should be quite high,» says Mr Forgeot, «and we had to argue with him over several of them to make them as appealing as possible.» At the end of the day, the 85 years-old businessman, and former companion of the late Yves Saint Laurent, was not disappointed.

« It is one of the biggest collections in the world,» underlines Mr Forgeot, «and it is very open on various cultures, periods and writers. Pierre Bergé clearly chose his books with care. Furthermore, he granted us, the experts an invaluable favour by leaving us totally in charge of the catalogue.» And what a catalogue! A thick in-folio volume that looks like a Bible, the result of an eight-month full-time job. The auction house of Pierre Bergé is used to important sales, as it was already in charge of the sale of Pierre Beres’ collection that generated some 35 millions of euros a few years ago. But Pierre Bergé’s collection should gather even more. «The six sales altogether should generate around 40 millions,» he says. « We’ve just collected 11.7 millions euros with this first one even though six important books (out of 180) had been retrieved from the sale, including the manuscript of André Breton’s Nadja, which was directly sold to the National Library of France.» There were a few disappointing results, though; including the folio edition of William Shakespeare’s works, which didn’t go over 200,000 euros—a very fair price, indeed. The first edition of Montaigne's Essais was sold for 140,000 euros only. Pierre Bergé was personally unhappy about the 368,000 euros obtained for the first edition of Madame Bovary dedicated by Flaubert to “the master”—meaning Victor Hugo. Coming across the buyer, Jean-Claude Vrain, a few minutes after the sale was over, he told him: “You got it for nothing. If you want to sell it back, I promise I’ll buy it back from you.”

Yet, Mr Forgeot is quite satisfied with this result: «Pierre Bergé’s reaction is emotional, we can’t fight it. But it is actually a good price.» Other books sold very well, including the manuscript of Flaubert’s L’Education Sentimentale (470,000 euros), the works of Louise Labé (see previous article—430,000 euros) or Les Fleurs du Mal by Baudelaire (notwithstanding the appraisal of 60,000 euros, it went for 225,000 euros), which was also bought by Jean-Claude Vrain. The first edition of Saint Augustin’s Confessions sold for a very good price too (260,000 euros), and when a gorgeous drawing of Victor Hugo went for 400,000 euros, the audience gave a round of applause. For his part, Jean-Claude Vrain made it clear that he is not retired from business yet. Though said to be ruined, he eventually bought for more than almost 2 million worth of books, shouting his name out loud to the auctioneer as a challenge. He probably had orders from some discreet buyers, and was overheard saying: «I’m still getting hard as wood!»

The rich buyers get richer

The market is supposedly morose but these incredibly expensive books were sold at very high prices, and the few ones that did not meet the reserve price are already in the process of being sold aside. So, what does such a sale tell us about the market for old books? It might seem a very good omen, but at the same time, the ever-increasing prices of exceptional books go along with the ever-decreasing prices of “ordinary” ones. It is the painful stigma of the general situation: a deep economical crisis that makes the rich richer, and which gives a hard blow to the middle-class. Under these conditions, old books obviously represent a good investment for wealthy people—well, at least the exceptional ones. «Whereas exceptional books become more and more expensive, the ordinary ones get less and less expensive,» commented Mr Forgeot. He then quotes several sales that recently made impressive results, such as Sotheby’s Pirie sale in New York (15 millions) or Christies’ in Paris (3 millions). «You must make the difference between the “learned buyers”, who buy old books that are not available otherwise, and the collectors. The first ones used to buy ordinary books because they wanted to read them. Booksellers would organise the rarity of these books to maintain high prices.”

The Internet revolution has freed these buyers from the yoke of their suppliers. Indeed, a quick search on the Addall website, for example, will demonstrate that most old books are not that rare. “These buyers have stopped buying books at over the top prices,” says Mr Forgeot. “They buy reprints or they read on-line, and this is hurting the market of ordinary old books. But the collectors, who are interested in exceptional copies, buy more than ever.” So, who are these “collectors”? “People who do not buy books, but objects. They don’t necessarily read their books, but they simply buy icons. In this regard, the more our world becomes virtual the more these icons become valuable.” Mr Forgeot here quotes an unexpected example: the success of Aristophil. Beg your pardon? “I’m not talking about the scandal here, but about their former exhibitions of old manuscripts. The one of the French writer Romain Gary, for example, was twice extended when hosted in 2010! To be truthful, I love Romain Gary, but I would not have bet a dime on this project. It shows that people are now longing for this kind of relationship with art.” Does it mean that people queue in front of exhibitions just like the Romans queued in front of the temples of their divinities? It has always been a touchy subject; but if Mr Forgeot is right, then bibliophilism will soon be nothing but idolatry. This would be quite ironic, if books, which took Man out the dark cave of ignorance and superstition, should become the objects of Man’s pagan worshipping. No wonder they will get more and more expensive, then. The calf of the Jews was not made of clay, was it?

Pierre Bergé, who used to call his antiquarian books his “best friends”, confesses, in one of the promotional videos for the sale that he did not read them, out of “respect”. Just like princesses during the days of courteous love, books are worshipped, but hardly honoured. What’s the use, then, to get “hard as wood”? Mr Forgeot is an optimist, and he rejoices. He who loves building up catalogues and talking about books and their authors, sees a bright future ahead, full of learned booksellers who will explain books, describe them with passion... to impotent (but rich) buyers of pagan icons? Hallelujah! Or should we say, Hallelu-aristophil?