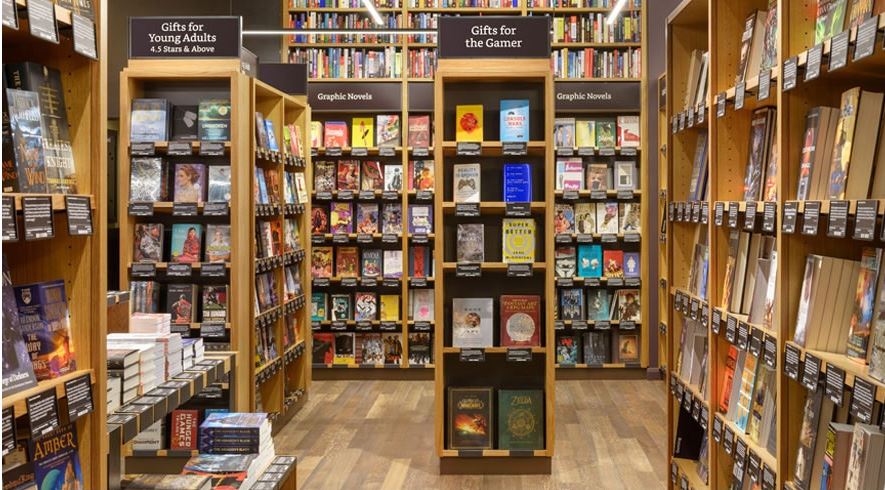 If you can beat them, join them anyway. In a surprising twist to a story that began twenty years ago, Amazon.com has come full circle. After crushing countless bookstores, from small independents to large chains, Amazon has opened its first bricks and mortar bookstore. We are confident this is not some part of a nefarious twenty-year plot to destroy existing bookstores so they could have the physical store trade all to themselves. Whether this will spread beyond the first store in Amazon's hometown of Seattle will undoubtedly depend upon its performance.

Amazon's first physical bookstore opened its doors on November 3. As Amazon Books VP Jennifer Cast noted in a letter to Amazon customers, "These aren’t metaphorical doors: these real, wooden doors are the entrance to our new store in Seattle’s University Village." She then goes on to explain a bit more about the store, which provides some insight into Amazon's thinking: "Amazon Books is a physical extension of Amazon.com. We’ve applied 20 years of online bookselling experience to build a store that integrates the benefits of offline and online book shopping. The books in our store are selected based on Amazon.com customer ratings, pre-orders, sales, popularity on Goodreads, and our curators’ assessments. These are fantastic books! Most have been rated 4 stars or above, and many are award winners."

What we see here is Amazon leveraging the enormous amount of information they have collected about book buyers and their reading habits to gain a competitive advantage on other bookstores with less data to draw upon. Being able to draw on a huge base of data Amazon knows what books customers buy, which ones they like the most, which new books to stock because customers are placing heavy pre-orders. The cherry-picking of books rated 4 stars or above means they will not be filling their shelves with books that will disappoint buyers.

Unstated is that Amazon will also be able to target individual stores depending on their geography. They already know which books are most popular in each zip code. If their second store is in Des Moines, it will likely carry a different selection from the one in Seattle. Our instincts, and those of a typical store manager, might say to stock more books in Seattle about brewing coffee than raising hogs. Amazon won't have to rely on instincts, which may be wrong. They will know precisely which books are likely to be better sellers at the Seattle store. Advantage Amazon.

This is not a giant store. It is not a Barnes & Noble, with coffee and pastries. The fact that they will be displaying books cover out, rather than by the spine in shelves, reduces the number they can sell in a limited amount of space. Naturally, they will be able to help customers draw from the millions of books available on their website. While Amazon, which started as an online bookstore, now sells just about everything under the sun, the store will be limited to their book roots. A few of their own, related electronic products, such as the Kindle e-reader, will be available, but there will be no vacuum cleaners for sale in the Amazon bookstore.

Time will tell whether this is a good idea. Certainly, they will sell more books in the area around their store. Some will be cannibalized from online sales, but perhaps that will be balanced by customers who come into the store but then buy a book (perhaps one not stocked in the store) online. However, operating a store adds greatly to expenses. The success of their online model is based on being able to sell goods efficiently and cheaply. The store will require paying rent, hiring staff, and various other expenses not part of their current model.

Perhaps they are looking at the marginal business model of other booksellers and believe their advantages in information will make it all worthwhile. Maybe, but I doubt they are trying to emulate Barnes & Noble, just doing it a little better. My guess is they are trying to emulate their much bigger rival that has had great success adding stores to their selling mix – Apple. Apple's stores have been enormously successful, both in selling Apple merchandise on the spot and supporting other means of selling. However, Apple sells far more expensive items and at very large margins. They also sell items where technical expertise is more important to closing a sale than it is with books. Whether Amazon can duplicate Apple's store success, perhaps on a smaller scale, remains to be seen. But borrowing another old saying, nothing ventured, nothing gained.