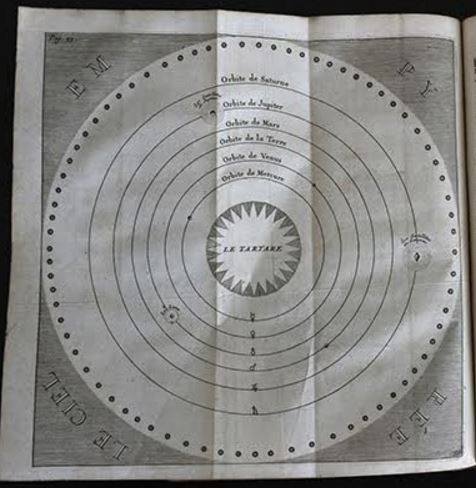 Like Copernicus, Swinden saw the sun as being at the center of the universe.

Revelation says (chapter XVI, 8; 9), «and the fourth angel poured out his vial upon the sun; and power was given unto him to scorch men with fire; and men were scorched with great heat.» Sinners, repent! Or thou shalt burn in a fire that will forever consume without destroying thee, thus leaving thee to suffer eternal pains and remorse in a giant barbecue. Now, this being said, let’s talk about logistics. Which place on Earth could possibly hold the numerous fallen angels and the countless sinners among mankind? A huge underground cave, probably. No, objects Tobias Swinden in his book An Inquiry Into the Nature and Place of Hell published in 1741 (London), as this place is of pure water. Furthermore, it would be far too small. There is only one place Hell can be found, the body of the Sun.

Just as NASA was putting out the very first high-definition (4K) video of the Sun, God put a weird book on my (narrow) path the other day, the first French edition of Tobias Swinden’s Recherches sur la Nature du Feu de l’Enfer et du lieu où il est situé (Amsterdam, 1728). This in-8° volume illustrated with two intriguing folding plates is what bibliophilists call a “curiosity”. This type of book is usually cherished, since they are among the rare ones to arouse our neophyte friends’ interest. Theologians have never been sparing with silly books, and most of their productions cannot even be regarded as testimonies of their time, but only as the fruits of their disturbed minds. But Swinden’s work is different. His system is built around “the old Pythagorick and the new Copernician system, which supposeth the Sun, and not the Earth, to be placed at the centre of the World.”

As an English priest, Swinden did not fear the Pope’s discontent and “took for granted” the heretic system of Copernicus, whose book had been listed on the Index Librorum Prohibitorum (the Index of Forbidden Books, first published in 1559 at the request of the Inquisition) since March 1616. As a matter of fact, the French edition or our book was printed in Amsterdam—far from the police of books—and came out without Approbation. The French translator, Jean Bion, was a priest from Dijon, who later denied Catholicism and sought refuge to England, and then to Holland. An Inquiry Into the Nature and Place of Hell was also added to the Index Librorum Prohibitorum on May 22nd, 1745, and was still listed in the 1948 edition. “Behold therefore the Sun fixed in the center of the Universe, about which in their several orbits the planets are supposed to move; and among them this terraqueous globe on which we live,” writes Swinden to explain the first plate of his book (see illustration). In accordance with Copernicus and Gaffendi’s theories, the Sun stands in the middle of the Universe (the lowest part), surrounded by the known planets of the Milky Way. Farther are the fixed stars and, at an almost infinite distance, the Empyrean Heaven (the highest part), where the righteous souls shall end up following the destruction of the Earth—and the period of 1,000 years evoked in Revelation. “The two extreams (sic) or opponents in the highest degree are the Empyreum, and the body of the Sun. The former of these is confessed by the Divines, as Gaffendus affirmeth, to be the region of angels and happy souls. And therefore what more rational than to suppose the latter to be the seat of devils and miserable spirits?” Indeed, it sounds like reasonable sophistry.

Swinden, who wants to proceed scientifically, needs to demonstrate the physical existence of hell, yet was questioned by some stubborn philosophers. It is, as reported by St John in the Bible, “a lake of fire and brimstone, where the beast and the false prophet are and shall be tormented day and night for ever and ever.” Swinden’s description of Hell will give you the creeps, even in 2015: “The punishment of hell are by Divines reckoned to be that follow, shame, and confusion of face, the wrath of God, an eternal separation from God, and His holy angels, and the spirits of just men made perfect; a society of fellowship with devils and wicked men, tribulation and anguish of mind,”—which, so far, sounds like ordinary life on Earth—“and lastly the torments of outer darkness and tortures of hell fire.” Being physically and forever tormented by fire is an unpleasant prospect, I agree; but the worst about Hell is probably the dreadful “worm of bitter remorse” that shall “inwardly gnaw thy conscience.”

Defining Inferno in his Philosophical Dictionary (no place, 1773), Voltaire says: “Inferum, underground passage. The first peoples buried their dead underground; their souls, they figured, went there with them. Such was the first physics and metaphysics of the Egyptians and the Greeks.” Yet, Swinden wonders, if Hell is a lake of fire, how could it be located at the heart of the Earth, since God “has founded (the Earth) upon the seas, and established it upon the floods” (Psalm XXIV)? Besides, Genesis says, “In the beginning (...) the spirit of God moved upon the face of the waters.” Swinden then concludes: “If there must be some other body about the center besides earth, it would be more consonant to reason and experience, if not to Revelation too, to place water there than fire.” Not to mention that the heart of the Earth is too small to welcome so many sinners and devils. When God chased “Lucifer and his apostate angels”, it left a wide gap in Heaven. “If then such a number of angels fell has caused a great chasm in the vast orb of the Heaven itself, how can they be conceived as containable in a minute part of the little ball of Earth?” Revelations says, “the tail of the great dragon (when falling from the heavens—editor’s note) drew with him the third part of the stars of Heaven.” As a result, “they who fix the dimensions of hell in the Earth,” rages our author, “and state it to any determinate number of lapsed angels and miserable men are unpardonably presumptuous.”—forgive them, Lord; they know not what they are thinking!