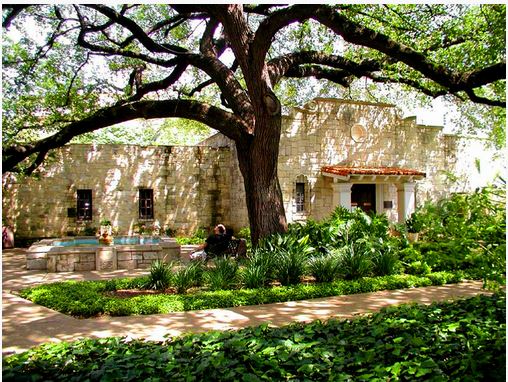 The Alamo Research Center (photo from the DRT website).

The Daughters of the Republic of Texas won at least a temporary victory over the Texas General Land Office in the Battle of the Alamo Library. The Daughters (DRT) operated the Alamo itself for over a century before being ousted by the state government. There was little they could do about it. The DAR raised the funds and purchased the then crumbling structure in 1905 to save it from destruction. However, they also turned over ownership of it to the state. The DRT then operated it on behalf of the State of Texas. When the state demanded it back, there was nothing they could do but acquiesce.

However, there is a separate structure on the property, once known as the DRT Library but now the Alamo Research Center. That, too, is owned by the state, but the collection within it is in dispute (see Second Battle). It consists of around 38,000 items, many pertaining to the Alamo but others related to Texas history in general. Both sides concede that the other owns some unspecified number of items within the collection, but the great majority are in dispute. Records may not exist for long ago gifts, or it may be unclear who the giver intended the recipient to be (presuming they even distinguished between the DRT and the State). Both sides claim ownership of these. The state has said, in effect, it owns everything the DRT cannot prove was specifically given to them, or purchased with funds not contributed by the state. The DRT says these items were handed over to them, not the state, and were received on behalf of the DRT.

With their lease on the building set to expire next July, the DRT began seeking a new home for the collection. In August, they said they found one, later revealed to be Texas A & M University-San Antonio. Perhaps the Land Office feared the Daughters would seek to sneak the disputed collection out in the night as one morning in August, workers arrived to find the library padlocked. According to the DRT, employees were informed they could retain their jobs but would be working for the state. The DRT also claimed their computer system had been hacked. The Daughters quickly headed off for the courtroom, where they obtained a temporary restraining order against the state.

Now, that preliminary matter has been adjudicated in court, with the DRT pleased with the results. They will continue to have complete access to the collection and be allowed to operate the library. That will continue until July 11, 2016, when their contract with the state expires. Meanwhile, a trial to resolve the bigger issue – who owns the collection – is set for February 22. This one could be reminiscent of the earlier Battle of the Alamo, when Davy Crockett, Jim Bowie and others fought to the death over possession of the Alamo. Maybe this won't be quite to the death, but the Daughters of the Republic of Texas probably hold Land Office officials in about as much esteem as the Texians did Santa Anna.

While technically unrelated to the earlier taking of the Alamo by the state, this action is undoubtedly an outgrowth. The DRT had dutifully maintained the historic building they had saved for over a century. However, Land Office officials believed it was not being kept up as well as it should be. Additionally, they wanted to improve Alamo Plaza, the historic district around the Alamo. Their belief was that significant upgrading of the entire experience of visiting the site was needed to satisfy modern tourists. The state, with access to tax dollars, has virtually unlimited funds. The DRT could only rely on donations and sales at the museum store. The kind of update desired by the state, which hired outside designers to come up with a new plan for the area, would be beyond the means of the DRT. Still, the change was hardly welcomed by the DRT and its supporters, even if they realized there was nothing they could do. The state certainly has the capacity to make Alamo Plaza a more desirable destination for tourists, and hopefully a greater teaching site, though we certainly hope they don't turn it into Alamoland in anticipation of turning it into a profitable venture.

The Daughters did recently receive a significant letter of endorsement from a group of archivists and academics, including former Texas state archivist David B. Gracy II. They said there was nothing in the DRT's operation of the library that suggests it needs to be taken over, while maintaining the Land Office does not have the expertise to manage the archives. They contended the Land Office's claim "would set an untenable precedent that would potentially impact the ownership of every Texas museum and library collection acquired through donations." It should be noted that not everyone shares this group's endorsement of the DRT's expertise and management of the library.

The DRT will find itself up against a powerful name in Texas and national politics when they go to trial next year – George Bush. No, this isn't the former President George Bush, nor the other former President George Bush. This is General Land Office Commissioner George P. Bush, grandson and nephew of the former Presidents. His dad, Jeb Bush, aspires to be the third President Bush, and if he makes it, many in Texas suspect George P. will seek to be the fourth President Bush. The man is influential. This is a worthy opponent, with the Daughters of the Republic hoping they don't end up like their Alamo forefathers.