The British Library Rejects a Collection... For the Wrong Reason 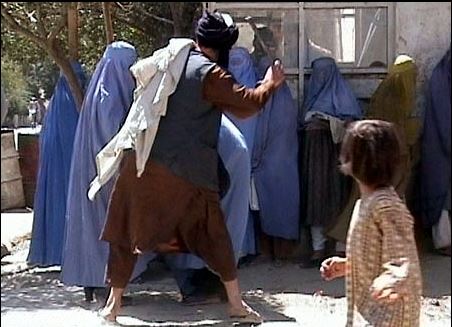 Taliban religious police beat woman on a Kabul street in 2001.

Libraries don't accept everything offered to them. Indeed, much of what is offered is declined, even though it may be of significant value. Storing and maintaining material in perpetuity is expensive, so unless the items are highly valuable, highly sought after, or appropriate to that library's particular collecting niche, the chances are good it will be declined. However, this was not the reason why the prestigious British Library recently turned down a large collection of material of high interest to scholars of current events that would have cost little to maintain.

The British Library was recently offered a large collection of material pertaining to the Taliban, the Afghan group run out of the government of Afghanistan a dozen years ago after the U.S. and allied invasion. Certainly, this is timely material, and valuable for those trying to understand the medieval mindset of this group and others that have had such a major impact on recent history. Even those who want to destroy these forces from the Dark Ages would surely agree that understanding how they think is essential to combating them. And, if the concern was maintaining the collection might be too expensive, it is a digital collection. A few gigabytes on a tiny, inexpensive chip should do the trick.

The concern here was legal, and perhaps a case where the law, or at least a perception of the law, has led to what appears to many to be a ridiculous conclusion. In their explanation for declining to host what is known as the Taliban Sources Project, the British Library cited the Terrorism Act. That act is designed to prevent British residents from supporting terrorist groups, and while the Taliban has not officially been so named, one could certainly come to the conclusion that they are such a group based on past behavior. In its brief explanation for refusing the collection, the British Library stated:

"In July 2015 curators from the British Library met with Thesigers, a consultancy that represents the Taliban Sources Project, to discuss whether the Library would be willing to acquire and give access to their large digitised archive.

"Although the archive was recognised as being of research value, it was judged that it contained some material which could contravene the Terrorism Act, and which would present restrictions on the Library’s ability to provide access to the archive for researchers.

"The Terrorism Act places specific responsibilities on anyone in the UK who might provide access to terrorist publications, and the legal advice received jointly by the British Library and other similar institutions advises against making this type of material accessible."

The Terrorism Act makes it illegal to disseminate material which could be used by a person committing or preparing for an act of terrorism, or to circulate terrorist publications. Perhaps that makes a circulating library uncomfortable. However, it also requires that the intention be to encourage terrorism or that the individual be reckless in promoting it. It is hard to imagine the British Library intends to promote terrorism or would be wantonly reckless by acting like a library.

What does the archive compiled by Thesigers, a London firm devoted to conducting research projects, contain? It houses official newspapers, maps, poems, radio broadcasts, laws and edicts promulgated by the Taliban. Most is from their time in power, mainly the 1990's. Much of the material has been translated to English so as to make it understandable to the average British Library visitor. It does not contain bomb making recipes and such. Heck, if you want that, you don't need to go a library. The internet will suffice.

Obviously, much of the material will state the Taliban point of view. They wrote the stuff. If you were inclined to their way of thinking, then you could be inspired by it. However, the same holds true for any other philosophy. Is the British Library no longer permitted to provide material teaching about the Nazis? Soviets? Red Chinese? Fascists? Genghis Khan? Ancient Romans, Greeks, or Egyptian Pharaohs? Heck, no need for the British to go so far afield. How about Henry VIII? He was a terrorist to his wives and various associates who had differing points of view. We Americans thought King George (III) was a terrorist during the Boston Massacre, Lexington and Concord, and various times thereafter. The Declaration of Independence is a litany of his "terrorist" activities.

Somewhere along the way, someone needs to exercise some common sense. A collection of material about a cause, no matter how terrible, made available under conditions set by a public library, is a necessary piece of scholarship. It is not a promotion of that cause, even though there is always some risk it will be misused. That is the price of freedom. It is hard to imagine that the stifling of understanding was the intent of the law, or that a state prosecutor would attempt to imprison their own librarians for disseminating knowledge. The outcry would be deafening. Better to have people sign in to read this stuff in a library than obtain it privately through the internet from those who seek to promote the cause, not explain it. It is important that we understand evil as well as good. As the philosopher George Santayana once observed, "Those who cannot remember the past are condemned to repeat it."