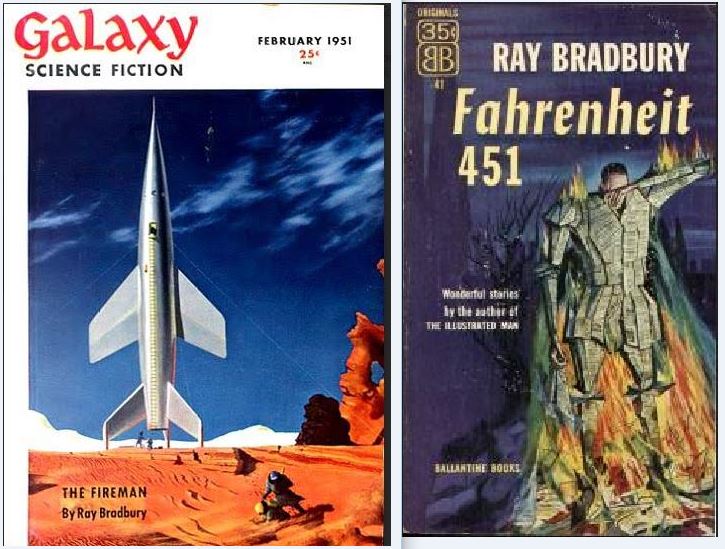 Smaller is better: Sometimes, especially in science fiction, the earliest version is in digest or paperback format. "The Fireman" the first incarnation of Fahrenheit 451 came out in Galaxy in 1951, the true first was the Ballantine paperback of 1953.

Here are 10 bookish tips for those who sell books and antiquarian paper online. Perhaps the best way to summarize these suggestions is by saying anyone can have a book, magazine, map, photo or other kind of old paper, but what the really good dealer adds is knowledge that sets what they have to offer apart from others and inspires confidence.

In today’s market smaller is better, and that includes vintage paperbacks and older digest sized specialty magazines such as science fiction. Looking at a shelf of paperbacks, look for the short ones, they are apt to be older. When in doubt about the actual publication date be guided by the cover price. The lower the price the older the paperback. Some of the most collectible science fiction came out first in paperback or in digest sized magazines. For example, Ray Bradbury’s “Fahrenheit 451” came out first as the novella “The Fireman” in Galaxy, Feb. 1951; it was expanded and published as a Ballantine paperback in 1953. The paperback is considered the true first edition.

2 SMALLER IS LESS EXPENSIVE TO SHIP BY AIR

First class packages are a good value. They are not expensive to ship, the classification goes up to 13 oz. and it goes by air. There’s a lot of small cool stuff that can be well packed and still under 13 oz. Words like “mini, tiny, wee, petite, itsy-bity" and even the old stand by ”small” are all sell words that describe a size. “Little” is good.

Trying to date something where the feel of the paper doesn’t match the date on the copyright page? There are several useful dates to know.

Zip codes first began in mid 1961 and became universal rapidly. No zip code on the publisher’s address usually means pre-1961. ISBN numbers come into use in the late 1960s and early 1970s and are slightly different depending on whether the item is American or English. If it’s got an ISBN number it is apt to be post-1970. Bar codes were first used in 1974 and were not widespread until a few years later.

So no matter what the printed copyright date says, if it has a bar code or an ISBN, it’s published sometime in the 70s or later, sometimes much later.

4 EVERY SPECIALTY FIELD HAS REFERENCE DATES - INCLUDE THEM

As people increasingly search for more and more specific kinds of antiquarian paper materials, it’s important not just to include a date, but also to include a date that puts the material in context. If you’re offering an early cartoon about the perils of flying published in 1909, don’t just say “1909.” It’s better to say, “1909, only six years after the  Wright Brothers first flight in 1903.”  If you don’t know the benchmark date, then look it up. If the material you are offering is in some way prophetic and the forecast turned out to be right, don’t neglect to  say so, it’s it’s apt to make the item appear more valuable and significant. Also mention if it was wrong, the wronger the better. Don’t just say “historic,” give the actual publication date, and a companion benchmark date that puts it in context, and if there is some futuristic element, right or wrong, point it out.

You have doubtless encountered books that carry the Book of the Month Club imprint. With rare exceptions these books are of lesser value because they were printed in very large editions and thus were very common. The best way not to get stuck with them is not to take them in in the first place. A typical BCE (Book Club Edition) has no price on the dust jacket, is a little smaller than the size the book was first issued, and frequently the binding has a small dimple (a little impressed mark about the size of a blunt pencil point) on the back board near the bottom close to the spine. A book without a dust jacket that has that little dimple is almost certainly a BCE.

Some of the early Little Golden Books bring a decent price, but where do you find the the actual edition indicated? Clever those publishing folks, they hid the mark inside the back cover. Open the back of the book. With the book open press down on the pages in the book. Gently look underneath the back cover below the bottom staple near the bottom edge of the last page. There should be a letter in the margin near the spine. The lower the letter the earlier the printing. The letter “A” designates a first.

7 A WORD ABOUT DUST JACKETS

8 WHEN TO FIX IT AND WHEN TO LEAVE IT ALONE?

Most of the time you don’t want to be the one who repairs a book. Especially if you think it might have significant value, leave it alone. It’s not your job to fix it; it’s your job to describe it accurately. With less than perfect dust jackets put them in jacket protectors and let the tension of the backing keep the jacket intact and prevent further deterioration. For older books (especially those with interesting bindings) you almost never want to fix it. You want to describe what’s wrong (backstrip detached but present, hinge broken or tender, etc.) and let the buyer decide if it’s worth it to them to send it out for repairs. The exceptions are low value books that need simple mending  - then use a linen backed adhesive tape for repairing broken hinges and Filmoplast or other inert archival tape to fix small edge tears. Don’t use Scotch tape. Don’t tape the dust jacket to the boards. When in doubt do nothing.

An real signature or inscription by the author can substantial value, just be sure you describe what you actually have. “Hand signed” by the author, illustrator or photographer means a real signature on the item. If there is a signature, inscription or date, it is important to note them. The term “flat” signed” has come to mean a book that is not inscribed to a particular person, it just has the autograph. However in the higher end more agust regions of bookselling world this term is vehemently opposed, and while it is useful to know what it is intended to mean, it is seldom (OK never) a good idea to include that particular terminology in your description if you want to be taken seriously by the elders of the tribe. No matter which descriptive term you use to describe a handwritten signature, remember it is not difficult to forge signatures so be cautious.  If it is a book or poster that you are taking to get signed, ask that it be dated, particularly if it is close to the original date of issue. “Signed in the plate” is another way of saying a printed signature (looks like a signature but it is a reproduction). “Inscribed” can a variety of meanings: Inscribed by a prior owner can mean something like “Happy birthday, Love Mom”, while inscribed by the author can be a much more significant, “A fond memory of Havana, regards Ernest Hemingway.”

On older  material, especially prints and maps the abbreviation “del.” stands for delineator - the name of the person who drew the picture, i.e. artist, (it’s usually on the left under the edge of the image.) The  abbreviation “sc.” or a number of other terms starting with the letters “sc” gives the name of the engraver or firm that did the engraving. This is usually found at the right below the edge of the image.  If you see “del” or “sc” point it out along with the names that follow.