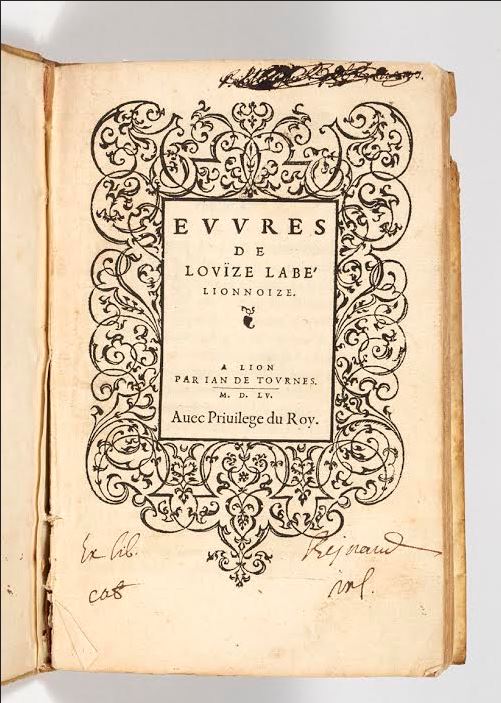 This is the kind of book that you’ll see once in a lifetime. Or, more likely, that you’ll never see in a lifetime. This is the fiery and disturbing testimony of a one of a kind woman, who lived in Lyon, France, in the 16th century, and whose sensuality—not to say eroticism—, gave birth to a masterpiece of French literature. Her name was Louise Labé, and her passionate poems keep on disturbing people almost five centuries after they were published chez Jean de Tovrnes, in 1555. An original copy will be sold in Paris this winter, bound in contemporary vellum; it is said to be “the nicest known copy,” by the expert for the sale, Benoit Forgeot.

Our book will, no doubt, attract a lot of curious during the exhibition for the sale, next December. “We’ll be careful,” says Benoit Forgeot, “but every book will be accessible to all.” This is one of the miracles about auction sales. “I’ll attend the exhibition, yes”, casually confesses Mr Wolfi, a serious collector, who buys nothing but books from the 18th century bound in contemporary full morocco. “I can’t afford the Louis Labé, but I’m not sure I’ll ever see a copy again.”

People will pack the exhibition room, but not for this book only, as we’re here talking about the sale of Pierre Bergé’s personal collection. “Trees lose their leaves in autumn,” explains the 85 years old businessman and collector, former companion of Yves Saint Laurent. And these are gorgeous leaves! A first edition of St Augustine’s Confessiones (circa 1470); a 1532 edition of Villon’s works, the first edition of Montaigne’s Essais, “printed in Bordeaux by Simon Millanges,” reads the catalogue, in 1580; the first edition of Lafontaine’s Fables (Barbin, 1668), in full contemporary morocco; and so on, and so on... not to mention the manuscripts, or the modern books. “There’ll be six sales,” explains Mr Forgeot. “The first one, which will be held on December 11, at Drouot’s, is quite impressive; but we have some nice surprises for the following ones, especially for the last one.”

The book of Louise Labé is just one jewel among a breath-taking treasure. Many of Pierre Bergé’s books are head corner stones of the history of French literature—but they are real stones, made at the time when the edifice was built. A lot of these books have a pedigree. The copy of Montaigne, for instance, made some noise when it was sold, a few years ago, for several hundreds of thousands euros; and the copy of Louise Labé “was listed in a catalogue of Pierre Berès’ bookshop (catalogue 85, (...) 1994, N°173),” reads the remarkable catalogue of the sale (yet to be published). “The bookseller had bought it during an anonymous sale in Lyon, in 1985.” Okay, let’s put it straight. If you don’t own one or two buildings in Manhattan, this book is unlikely to land on your bookshelf. The appraisal is 300,000 to 400,000 euros—before commission. “But it will sell for more than that,” sighs Mr Wolfi.

Louise Labé’s book contains 27 pieces of work only; “one of the most precious books in the history of French literature,” reads the catalogue. Louise Labé was an outspoken woman, who can be called a feminist before the term was coined—she was actually among the women who coined it. Louise Charly said Labé (1526-1568) had received a good and manly education. She was a very good rider, could wield a sword, and Dandeline’s Dictionnaire Historique reads: “Dressed as a man, she valiantly fought during the siege of Perpignan, and made herself terrible under the name of Captain Loys.” She also probably partook in a tournament in Lyon—King Henri II allegedly noticed her on that occasion. She married a rope maker aged 16, thus earning the nickname of La belle cordière—Lovely Ropie.

She was also a learned woman, who could speak French, Spanish and Italian. She received, says Du Verdier, “Lords, gentlemen and people of quality, at home”—elletenait salon, as we say in France. Music, literature, poetry, philosophy, all topics were discussed. And some more down to earth topics were also thoroughly explored in her bedroom. She was close to another poetess, Pernette du Guillet; both women are described by the contemporary historian Paradin as “exceling both in knowledge and poetry.” But another contemporary writer, Claude de Rubys, describes them as “two distinguished courtesans(...) with no literary existence.” Indeed, Louise Labé was probably a courtesan; or rather, a ‘free lover’, who sold—or gave away, according to merits—her favours. “This woman was both honouring and dishonouring literature,” claims Pierre Bayle in his Dictionary (Paris, 1820). “Dishonouring because, being a writer, she was also a courtesan; honouring because men of lettres were better received by her—and often for free—, than the ignorant, yet ready to pay her a fortune.”

Her poems weren’t meant to be published—so she said, as anybody else; but are today studied by the most learned French professors. “Never had the soul and the body been so slightly separated,” writes Thierry Maulnier in 1939. “A nuptial fusion of knowledge and sensuality.” Louise Labé used her body and soul as weapons to gain independence. “The time is come that the severe laws of men stop preventing women from studying sciences,” she writes, then urging her female peers to “look beyond the distaff and the bobbin laces.” A hell of a woman, indeed; who became even more fascinating a few years ago when a researcher called her a “paper creature”. Indeed, Mireille Huchon, in her book Louise Labé, a paper creature (Droz, 2006), considers her book as a compilation “elaborated in Jean de Tovrnes’s shop by a group of writers close to this printer.” But this controversy aroused just after Labé’s work was featured on the program of a prestigious national exam, l’agrégation—making it suspicious to some, while others denounced another attempt at belittling the input of women in literature. “Louise the warrior,” claims Mireille Huchon, “who set the biographers’ imagination afire (...) is nothing but an epic exaggeration, a clever invention.” But her thesis lacks evidence.

Labé’s book was reprinted in 1556, in a smaller format—in-16°—, and then... nothing, until 1762! This 1762 edition, the only one during the course of the 18th century, was duly printed in Lyon, and it has also become quite rare—the copies listed on international websites are sold around 1,000 euros. “Louise Labé (...) was rediscovered in the 19th century,” writes Laurent Angard.  “The poetess like Marceline Desbordes Valmore or Renée Vivien, made hers Louise Labé and her freedom of speech, to celebrate the emancipation of both customs and women.” She stands today among the most praised poets of the French Renaissance, though she was only published three times in almost 300 years!

In a filmed promotional interview for the sale, Pierre Bergé confesses that he hardly opens his antiquarian books—out of respect, or fear to damage them? In the case of Louise Labé, it seems like neglecting a lascivious and fiery beauty waiting for you— doesn’t Umberto Eco, in the preface of the catalogue, compare bibliophilism to onanism? Poor Umberto! This is yet such a carnal copy, printed at the very time Louise Labé was laughing, writing, and loving. And we can almost feel her warm breathing on our neck, as she whispers: “I live, I die: I burn and I also drown / I’m utterly hot and all feel is cold. / Life is too soft and too hard for me to hold/ my joy and my heavy burden are mixed in one. / I laugh at the same time that I weep and frown; / the tarnish of grief has marred my pleasure’s gold; / my good flies away, but stays until it’s old; / I wither just as I find out that I’ve grown / This is how love guides me, so changeably / that when I think the pain has me controlled, / with my very next thought I find that I am free. / Then, just as I trust in joy so certainly / that the peak of a yearned-for hour makes me bold, / he shows me my familiar grief unfold.” And our copy is even more deeply rooted in its time, as it was actually annotated at one point by a contemporary reader, “Le plesir des lettres”.