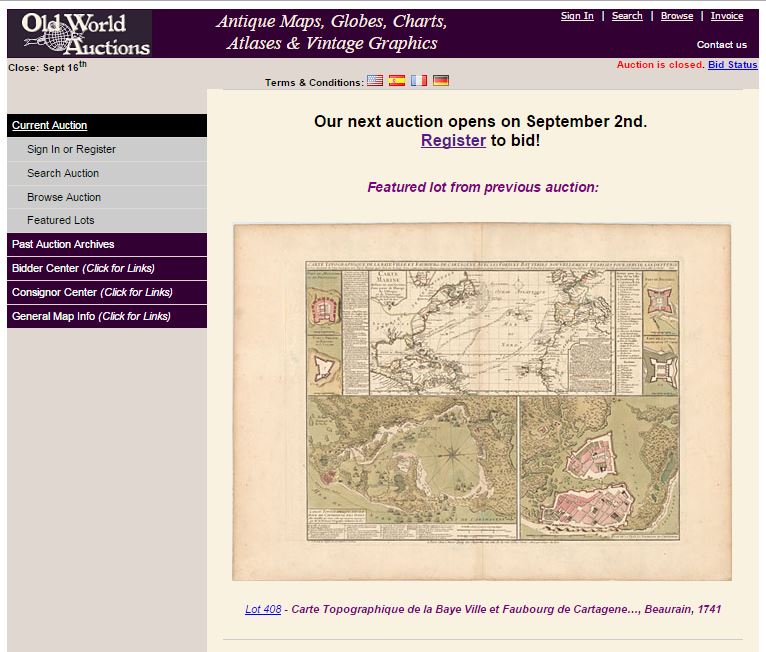 Old World Auctions, the online-only auction house specializing in cartographic material, is hosting their 154th auction this month, and as is usual for them, the estimates are conservative and the material varied. The 800+ lot sale will run from September 2nd to the 16th, ending at 10 p.m. Eastern Time on the 16th. Registration for bidding can be done on Old World’s website here. As of the time of this writing, lot numbers were not available for specific items so items are referenced by name and author only.

Americana is also available in abundance, with these items of particular interest:

Other material from all over the world is included in the auction, and depending on your focus, whether it be European, Asian, African, or any other locale, there are items that may appeal to you, and with the majority of estimates falling below $1000, the prices are reasonable.

Some of the most interesting inclusions in the auction are two maps depicting the State of Franklin, a short-lived would-be American state and de facto independent republic that attempted to secede from North Carolina after the Revolution. It only existed for approximately four years and now is but a footnote in American History, but in this sale, there are two items confirming its existence: America, by A.J. Stansbury, 1805 and a map in Taschenbuch der Reisen, by Zimmerman, 1805.

The online catalog for Auction 154 will be available by the 2nd of September when the auction goes live online. A link to register for bidding is on Old World Auctions’ homepage.