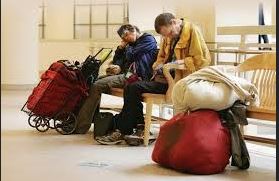 Homeless patrons at the San Francisco public library which has been the focus of recent heated controversy. SF Examiner photo.

Libraries have always attracted a certain number of people who just want to come in out of the rain, use the bathroom or snooze away the day in the cool reading room. But a review of recent media coverage makes it clear that something much more intense and widespread has been occurring in public and college libraries throughout the US in recent years.

The reports come from just about every urban area: Seattle, San Francisco, San Diego, Washington, DC, Nashville and Honolulu are just a few of the cities where homeless patrons not only access the library facilities, but overwhelm them: arriving early in the day, staying until closing time, bringing all their worldly goods in shopping carts, populating the stacks, monopolizing the resources, especially the computers, devastating the public restrooms, performing acts of vandalism on the buildings and their contents, and in some case committing acts of violence and intimidation against other patrons.

Even as libraries evolve and change from a repository mainly for books and their contents to a digitized and multi-media information hub with a broader focus and a wider user base, a parallel transition is also taking place. The library facilities designed to serve the information needs of our entire population are becoming de facto outposts for delivery of services to America’s homeless, a role for which they have little or no training - and a task that has not been in their job description before.

In some cases this evolution is benign and even welcome.

For example, a Dec. 2014 report on the death of Roger Boucher, 58, of St. Albans, Vt. notes: “(He) was a daily visitor to the St. Albans Free Library; where he had been staying longer in recent days. ‘He was kind of part of our little library family,’ said library director MaryPat Larrabee. Barbara Hamm, a long-time board member of Martha's Kitchen, knew Boucher for many years. ‘He was a very honest person,’ she said. ‘He found, I don't know how many wallets. They were all returned to their owners…..At the library, Boucher would offer to help as soon as he spotted a staff person moving boxes or getting out a ladder,’” said Larrabee. "He was always wonderful at the public library;" said longtime library trustee Sue Wade, adding that he was very polite, as well as helpful.”

But that kind of tribute is rare and it’s easy to find countless articles and videos that focus on the other end of the spectrum. Perhaps the most explicit is the long article in Harper’s Magazine in Nov. 2012 by Robert Andrew Powell who wrote about his own experiences as a homeless person among hordes of other indigents in the then brand new Seattle facility.

“The bathrooms," wrote Parker, “are located on the first, fourth, and seventh floors, and all of them are as busy as bus terminals. The toilets on the fourth floor are the least used. There are only two stalls, and it is common for occupants to remain in them for an hour or longer, until guards making their rounds order them to wrap things up. In a fourth-floor stall I once found a pyramid of empty Busch tallboys.

“The seventh-floor bathroom is the best: three urinals, three toilets, five sinks, and a guy wearing a face mask who mops up every few hours. Excessive grooming is prohibited in the library’s rules of conduct, but every day I saw teeth brushing, clothes washing, hair washing, and even hair cutting. In a seventh-floor sink one Saturday I found a nest of curly black pubic hair. People hung out in the stalls for long stretches even though the doors were deliberately designed to be too short to provide privacy. Everyone could see everything. I learned not to make eye contact.”

And it’s not just the public libraries, in March 2015 KPIX the CBS-TV affiliate in San Francisco aired these observations related to a nearby college: “Students at San Jose State University say the campus has a problem with homeless that is getting out of control. Trent Nunz is a fourth year business student who says the problem is so bad that students “can’t walk out of any individual building without seeing at least a couple homeless, anytime of the day. Anytime.”

“Madonna Ebrahimof says it’s not just the volume of homeless people living on campus, but that they have become intimidating and aggressive...Inside the library, students clash with the homeless over desk space, and open computers.”

That same note is sounded in Honolulu where a July 2015 video shows homeless cueing up to enter the building before it opens, and as a group have become the library’s primary patrons during the course of the day, far outnumbering other kinds of library users.

The response of Edna Weeks, library section head, who spoke to the KITV - Honolulu television reporter, was compassionate and level. She said that as long as those who come to the library are orderly and follow the rules the facility is there to serve all. But others library users who spoke to the camera had comments that ranged from “I feel like regular people are being pushed out” to “I just don’t go there any more.”

Virtually all the recent coverage contains some combination of compassion mixed with fear and dismay. In San Francisco (where the interaction between the library and the homeless has been loud and protracted) the library has hired a social worker, beefed up security and negotiated with advocates for the homeless over policy and rules to make the library more friendly and equitable to those with no place else to go.

This kind of outcome has pleased advocates for the homeless, but others, especially those who are professionally trained librarians, comment “I didn’t get a master’s degree in library science to be a social worker.”

The professional organizations and journals have also noticed the trend. American Libraries wrote about it in Nov. 2014 and added a list of resource material including a link to an eight page pdf produced by the American Library Association Office for Literacy and Outreach which gives guidelines for delivering services to homeless as another segment of the population who are entitled to fair and non-discriminatory library policies.

“Helping homeless and mentally ill clients is a challenge that libraries all over the country are grappling with,” observed the website Phys.org just last month, “but library science curricula don't seem to have caught up….According to one newly minted librarian who received her master's degree in library science a few years ago, contemporary library education typically includes no coursework in mental illness. It focuses on the techniques and technology of library services, especially meeting the needs of patrons for access to information.”

“That’s quite a list,” Annoyed observed, “and gives a good indication of what the library staff is up against.” The article went on to say that “if the San Francisco public libraries have become de facto homeless shelters, as National Public Radio (coverage) suggests, then making them more like de jure homeless shelters might be the best solution to the problem.

“Their clothes still stink? Laundry facilities. ….People changing clothes in the library? Changing rooms, right near the laundry room and the showers. People sleeping all over the library? Offer cots. They can come with a time limit. Carrying their luggage around the library? Lockers.”

“..... Considering how many librarians want the nature and function of public libraries to move away from books, information, and literacy to become community centers and maker spaces,” the writer said, “this shouldn’t be an outrageous suggestion.”

“If libraries are already loaning tools, why not washing machines? They already have toilets, so why not showers? …. Libraries can’t solve any problems with homelessness, and this isn’t a solution for homelessness problems. This is a solution for library problems…. if the mission of public libraries is now to provide whatever services the public wants or needs, then this makes complete sense.”

Links to some of the sources cited in the text:

ALA pdf on homeless engagement and outreach (not dated)

The Annoyed Librarian offers plan B in Library Journal 2014