Gossiping in Montignac-Lascaux - Is the only summer auction in France worth attending? 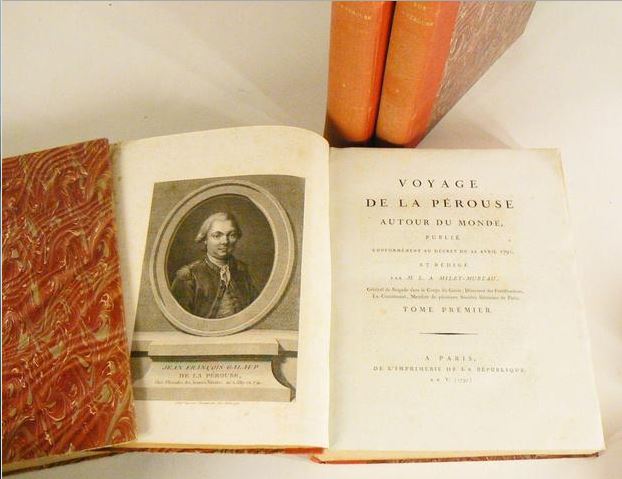 A first edition of La Perouse's Voyage Around the World was offered.

August is the dead period for old books. Drouot closes its doors by mid-July and other websites like interenchères.com only list one auction sale in France for the period, the Galatau Pastaud's, which takes place every year in Montignac-Lascaux, Dordogne. Unfortunately, it suffers from a bad reputation. So, is the only old book sale of the season worth attending? “Of course,” according to Pierre Poulain, the expert for the sale. “Only if you're Russian,” giggles Mr. Labrish, a local bookseller.

Montignac-Lascaux is a highly touristic place, located 500 kilometers south of Paris, in the heart of the countryside. Its worldwide known prehistoric cave attracts dozens of thousands people every year. Yet, it's a strange location to host an old books sales. “In August 1995,” explained Pierre Poulain on the phone, “my friend Mr. Galatau, who works as an auctioneer in the nearby city of Limoges, and who owns a house nearby Montignac-Lascaux, called me for a sale which featured a handful of antiquarian books. Surprisingly, they sold very well. We went on from there.” But according to a few booksellers around, there's something fishy about this sale, one of the biggest of the year. «We all know where these books come from» smiled one of them - let's call him Mr. Labrish. «This is just a big made-up sale!» Meaning, the books are collected from various sources and not from a unique collection. «And the best sales,» resumed Mr. Labrish, «are the 'real' ones, those built up around the collection of a true bibliophile.» Pierre Poulain seemed quite aware of these rumors. “They come from wicked tongues; a couple of jealous and bitter booksellers, who tried to work with us, but whom we turned down since they asked too much for their books. And yes, this is a made-up sale; all sales are, including those of Christies'! There's no more great book collections around. Our 2015 sale features 50 various sellers; the books mostly come from three different estates, the collection of an old man from Limoges and, yes, from various booksellers, who sell off a part of their stocks. But that's how the business runs, and if we had been taking people for a ride all these years, we wouldn't be around since 1995.” Well, Madoff’s forgery lasted quite a long time, didn't it?

Mr Labrish's book store is open in the summer as he tries to benefit from the flow of tourists too. As an expert for a nearby auction house, he knows every trick in the game; and he laughed when asked if he would attend the sale of Montignac-Lascaux. «These books aren't interesting!» he said. «You know why? Because most of them are collected from professional booksellers who've been trying in vain to sell them, sometimes for years! If they haven't succeeded, it's because they ask too much for them.»

But our booksellers are honest merchants, of course – and they would never be part of a tricky business. Unfortunately, as times get hard every opportunity becomes an option. “The rare and luxury books will always sell at good prices,” said Pierre Poulain, “but we've stopped selling the smallest ones, as nobody buys them anymore. That's because the small booksellers, who used to buy them, disappear by the hour.” And that might embitter some of them. According to Mr. Labrish, many “dignified” booksellers even try to sell at Montignac-Lascaux nowadays. «I had to laugh when I saw some books coming from the shop of a well-known bookseller. I asked him: How dare you, after repeating for years you would never work with Galateau Pastaud? The books you listed in their catalog are already listed in yours, with their recognizable ex-libris!»

Apparently, to work with this sale openly makes it even worse. The real problem, Mr. Labrish said, lies in the reserve prices that prevent the books from selling for a “regulated” price. «If you noticed, the appraisals of the few interesting books in the catalog are ridiculously high.» But how does it work, then? “Well,” smiled Mr Labrish, “first, I guess the room in Montignac-Lascaux doesn't cost them a lot. For the mayor of the city, it's a good thing to welcome an alleged prestigious event. These books are supposed to attract some wealthy tourists, and it adds a cultural event on the agenda of the city. So they probably get the room for free. Furthermore, they don't care. They charge both the buyer and the seller 25 or 26%, (in fact, 21,10% for buyers, NDLR). Except bookseller, of course, who aren't charged more than 10%, I guess.»

But if they don't sell most of the books, what's the use? «Well, the last time, some Russian buyers attended the sale and paid ridiculous prices for a lot of books! That made the day of the auctioneers! Trust me, unless you wish to be the butt of the joke, you don't want to bid at this auction sale.» A few days before the sale, Pierre Poulain wasn't worried. “If we're lucky, we'll sell 70 to 80% of the items; if unlucky, maybe 50%. The book business has changed. We used to have some powerful buyers, a few years ago. Some Russians, indeed but not only; there were some Belgians and even some French. They've disappeared, probably because they had “too much” money at the time – it couldn’t last. And we sell 40% of our books through “live auction” on the internet! We must explain to the sellers that the market has evolved. The copies of Cook's voyages have lost a lot of value, for instance; and a book which was worth 150 euros yesterday might be worth 80 euros today. But at least it's still selling! Honestly, I think that the business is now stabilized. Right after the crisis in 2008, I feared that old books might go down just like the antique furniture. The biggest weakness of the market comes for the buyers of the upper middle-class, whose purchase power has suffered from the crisis. But there's a new generation of buyers; they’re in their thirties or forties, and they keep old books alive. Out of the roughly 1,000 French buyers of old books who exist today, 2 or 3 should build some exceptional collections.”

Upon learning that this article was to be published by an American website, Pierre Poulain sighed: “The American buyers totally disappeared from auction sales when the dollar was so low; they're crawling back nowadays, but we've grown suspicious. Indeed, we've had bad experiences with several American buyers who never paid for the books they had bid on. It was getting even worse than with the Italians, at one point.” Wow! Come on, American buyers... “worse than the Italians”? Pull yourselves together quick, please.

No sale is a prophet in its own region. Mr. Labrish's opinion isn't isolated in Dordogne, but I noticed, while speaking with him, that he was trying to sell me a book I thought was overestimated. I didn't buy it. Hey! Who knows? It might resurface on a next Montignac-Lascaux sale; and I might get a better bargain – if no Russian is around, that is.

Editorial Note:  Since this article was published, the auction house of Mr. Poulain has been in touch with us. They affirm that they do pay for the room where the sale takes place every year, in Montignac-Lascaux.