A Baker's Eight Dozen Plus Four 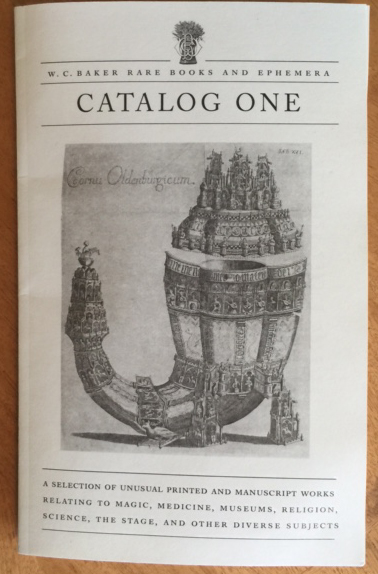 Will Baker: Catalog One

Will [W. C.] Baker is, among other things, a graduate of the William Reese Rare Book School.  He worked there for several years and gained a perspective on scholarship, presentation, and rarity that sets Bill Reese and his disciples apart. After working for the Reese Company, he paused his career in rare books to earn a library science degree and head the Institute Library in New Haven, where he began robust new programs of collection development, community events, and greater cultural diversity in the membership of that nearly 200-year-old organization.

He recently issued his first catalogue: Catalog One.  It’s a hundred items of interesting material in histories of science, religion, and the performing arts, much of it Americana, many of the items examples dealers are increasingly reluctant to carry because they are inexpensive but which collectors and library curators highly desire.  Today the rare book field is increasingly a money game.  In Will’s world, it’s still about collecting.

Said another way it is, in my view, Will’s reflection of what collecting used to be, and what he hopes it will be again: a sustained attempt at real discoveries, opportunities for original research, disruptions of conventional knowledge, and moments of wonder.

So this is his first effort.  It will be distributed fully in September.  This month it’s being sent to those who make a request.  In this way he hopes to build links and relationships.

So ask for his catalogue and spend a few minutes to speak with him.  The halls and isles were once flush with new dealers, these days not so much.  But they are important, even essential to the future of the field.  So here are my best wishes.  We all gain if you succeed.

Link to the catalog electronically

Will Baker Rare Books and Ephemera