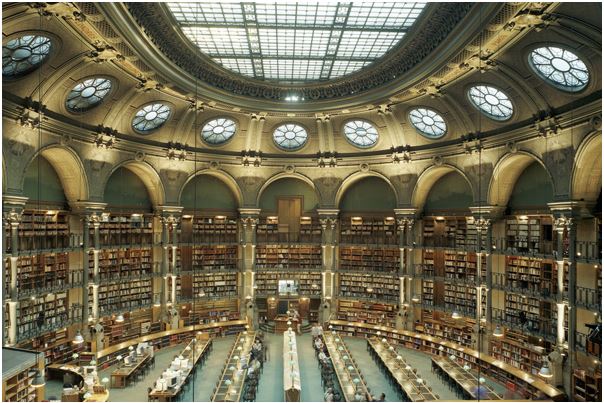 Forty-three prints, stolen from the Richelieu-Louvois branch of the French National Library, have been recovered. The prints have been valued at roughly $200,000. The thief reportedly has confessed. It was an inside job.

Last March, the library became aware that the prints were missing. They became aware in the manner so many libraries learn that material is gone. It was discovered not through their own procedures, but the result of a visitor who asked to see the book in which they were contained. The prints, which were engraved from paintings by Belgian painter Pieter Bruegel the Elder in the 16th century, had been cut from the book. Library officials quickly contacted authorities and put out a notice with ILAB (International League of Antiquarian Booksellers) and various European libraries that might be able to help find the material.

It has also been revealed that 20 maps are missing from a very old atlas, and these too were said to have been stolen by a library employee. It was not made clear whether this was the same employee, though that seems likely. The library has not said when it believes the material was stolen.

The library's security was quickly blasted by the CGT-BNF, the employees' union at the French National Library. However, it wasn't library officials they went after so much as the government which funds the library. Naturally, an employees' union is not the most objective group, but their message is still revealing. While acknowledging improvements in terms of security cameras, the union said that documentation of the collections is inadequate, reminiscent of the independent critique recently provided to the Boston Public Library (see article elsewhere in this month's issue of Rare Book Monthly). They described the National Library as "a library of the twentieth century, if not of the nineteenth century, with its files and paper catalogs, its not referenced collections in catalogs IT, communication applications on paper newsletters..."

Not surprisingly, the union focused on the reduction of employees, along with millions of euros in budget cuts. The CGT-BNF claimed that 260 jobs have been cut since 2009. Workers' self-interest notwithstanding, it's hard to imagine how any library could lose 260 employees without suffering in terms of security.