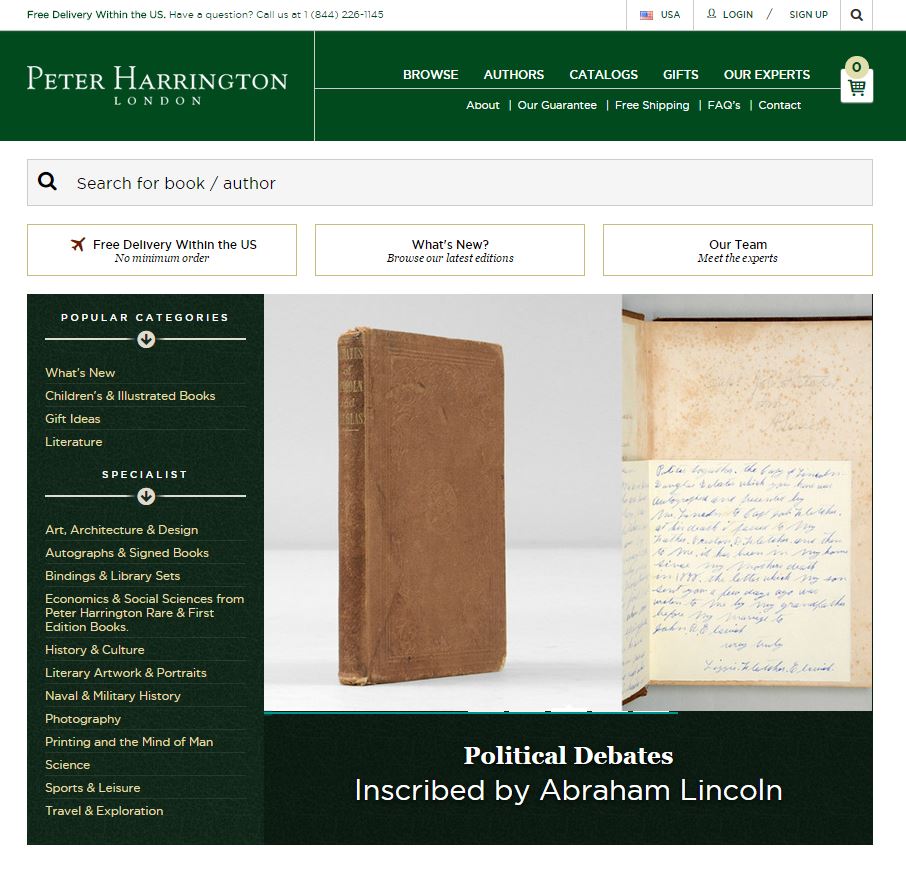 Peter Harrington's new website, with free shipping to the U.S.A., is primed for American customers.

The advent of the internet twenty years ago changed the centuries-old bookselling process virtually overnight. Books had been sold locally by a local book shop going back to antiquity, when they were produced by scribes, not printers. Advertising in trade publications, magazines and newspapers created a mail order trade in books to more distant locations, but that remained a small part of sales until the internet threw open the doors to commerce with customers who would never be able to visit the bookseller's shop.

However, even as sales through internet sites rapidly expanded and flourished, international borders still formed a barrier to sales. International telephone calls were prohibitively expensive, shipping costly and complicated. Concerns about the standards and integrity of merchants from another country were always present. Payment in foreign currencies, and constantly adjusting exchange rates, added the element of uncertainty as to how much you would end up paying for the book you purchased. Add to that the general unease of buying from someone so far away and national borders remained a wall to sales despite the international reach of the internet.

British bookseller Peter Harrington has been selling books in London since 1969. The firm is now in its second generation, operated by Peter Harrington's son, Pom Harrington. Over the years, they have developed into one of England's major booksellers, selling important material to discerning collectors. Clients for these sorts of books know no national borders. Interest in Shakespeare is not limited to the British, Joyce to the Irish, Twain to Americans. The very best of these and other authors have passed through Harrington's shop in London in recent years.

Recently, Harrington has sold a Shakespeare First Folio, almost unobtainable these days when even a Fourth Folio is beyond the reach of most collectors. A first edition of James Joyce's Ulysses, one of only 100 copies printed on Dutch paper and in its original wrappers, has passed through the shop. Samuel de Champlain's 1613 Voyages, and the publisher's copy of Mark Twain's Huckleberry Finn, "the first copy ever bound," with Clemen's handwritten, unused dedication, have also changed hands through Harrington's shop.

Harrington has long reached out to buyers in America through shows and a website, but has recently upped the ante in terms of reaching American collectors. Just as two decades ago, booksellers who resisted adjusting to the internet often fell by the wayside, the same may happen to top tier booksellers who are unable to reach out beyond their own national borders. We recently asked Pom Harrington about how bookselling has changed, its challenges, and what his firm is doing to reach out to new markets overseas.

"Change has primarily come around due to the impact of the internet," Harrington explained. "On one hand we have a much greater outreach and effectively a 24-hour shop window to the world, but on the other, specialist knowledge being shared means that trying to distinguish our knowledge from someone copying it in the marketplace is quite a challenge." Nevertheless, local sales remain important, and Harrington maintains two shops in London to reach locals and visitors to the city. "The biggest benefit of having a physical shop now is primarily as a meeting point rather than a place to browse. With this in mind, we opened up a flagship store in Mayfair with a selection of our stock in central west London for this purpose. We find that the website works hand in hand with a shop of this nature – customers browse online, then pop in to collect their books."

Peter Harrington still uses traditional methods of marketing overseas. "We still exhibit in new marketplaces, and have had moderate success meeting new clients over the years, but it’s a slow process. At American fairs you’re used to going, selling and coming home with sales. At other international fairs you can expect to take nothing and hope things come through in the next six months, which can be a bit hit-and-miss. Then there’s the alternative of exhibiting at antiques fairs etc. We have chosen Masterpiece as it’s local, held in London. It’s an interesting way to meet new customers, but there’s a very different atmosphere to get used to."

They have recently added a website targeted more specifically to America – www.peterharringtonbooks.com. The differences may be subtle, such as the use of a "dot-com" (.com) rather than a "dot-co-dot-uk"(.co.uk) to make it easier for Americans to find, and pricing in U.S. dollars rather than British pounds. That, Mr. Harrington has found, is a major consideration. "Being a UK company, we’re not as prominent in the U.S. as we would like, and a level of resistance or misunderstanding has come from the pricing of our books in pounds. We know that U.S. customers like to browse in their own currency and, importantly, pay in their own currency. The ability nowadays for a non-U.S. business to accept U.S. dollars and credit cards means transparency for the U.S. book buyer. We take on the currency risk, not the customer/client, which we hope is a way of overcoming barriers." Harrington also addressed a couple of other traditional challenges – postage and hours. "International postage is more than capable of competing with national delivery these days," he explained, "so that’s also not an issue for either party. Telephone hours have been extended in the shops to help work around time zone issues."

Overseas sales now form the largest part of Harrington's higher priced books. "At the lower end, the majority tend to be sold domestically, mainly due to the perceived difficulties in that market of ordering from abroad. When it comes to higher-priced items more than half are sold overseas."

International expansion is one way Harrington's has responded to the changing market. They will connect with collectors wherever they may be. Interestingly, while many booksellers see the changing market as a sign of decline, Pom Harrington does not see it that way at all. It is simply different today. "At the higher end, the number of dealers is reducing, mainly due to competition from the auction houses that have taken on a larger market share than in previous years. On the other hand, the market has grown and grown in terms of sale values, which indicates strength. At the lower end, ABE, eBay and the number of part time dealers has increased tremendously, which I think is actually very healthy. There’s a genuine market out there." Harrington continues to reach that market, just as they have done for the past 45 years.

Here are some links to categories specifically connected to America on Peter Harrington's website:

This is the link to the home page of PeterHarrington's American website - www.peterharringtonbooks.com