FEET OF CLAY: Harper Lee and/or Atticus Finch? "Go Set A Watchman" sells over a million copies its first week 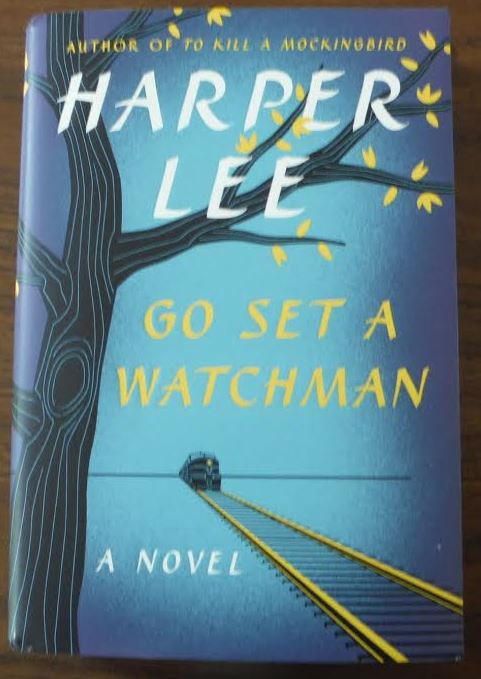 GO SET A WATCHMAN, a 2nd novel by Harper Lee, sold more than a million copies in July 2015 during its first week of issue.

Whoever said "There are no second acts in American literature," was not working for the marketing department of Harper Collins which released "Go Set a Watchman" on July 14. The publisher introduced it as a second novel by Harper Lee, whose first (and until last month only) book, "To Kill a Mockingbird," was published by Lippincott in 1960. Mockingbird went on to win a Pulitzer Prize and become an American classic: widely taught in the schools and selling millions of copies in dozens of languages over more than fifty years.

The newly issued second novel was touted as sort of prequel to Mockingbird. Said to have been written in the late 1950s when Lee, now almost 90, was a young unknown writer - it was supposedly her authentic voice unmediated by editing. Or so the story went.

It turns out that the two books share a few characters and a similar setting. Beyond that they have little in common. But you had to buy a copy to find that out and a lot of people wanted to know. By July 20 according to Publishers Weekly some 1.1 million copies had been sold, more than half of the first printing - estimated at 2 million copies, and Harper Collins had ordered a second printing of over a million more.

Though perhaps Mockingbird was not then and is not now great literature, it is one of the few novels of the last half century to have been fondly and consistently read, admired and discussed by readers in America and around the word. It's central characters are the young girl Scout and her father Atticus, a small town southern lawyer. The other characters both white and black are vividly drawn and tell a story that readers found dramatic and moving focusing on the controversial issues of race and justice. It is a novel that earned a warm place in the affections of millions of readers and was followed in 1962 by a well received film of the same name starring Gregory Peck.

According to most sources the manuscript for Mockingbird was rejected by ten publishers before Lippincott saw a glimmer in the prose and suggested recasting the original adult viewpoint to a story told through the eyes of a child and moving the time period from the 1950s to 1930s Depression era America. And the rest, as they say, is history.

There are multiple versions of how the manuscript for the second book Go Set a Watchman came to the attention of the publisher. One is that it languished in some bank vault as a work of juvenalia, until (Ta-dah!) some enterprising soul (wouldn’t you know it a lawyer) found it and Lee in her old age was then convinced that it was worthy of publication.

Not a good idea.

This is truly a dreadful book. It casts Atticus in a much darker light, warts out with racial biases that may have been hinted at before but were largely unexpected. But more importantly it’s slow moving, boring, stilted and as the Boston Globe put it “has more characters than a Russian novel.” It is so bad that one can not help but wonder if Harper Lee really wrote Mockingbird herself or if she had more than a little un-credited help from her editors and friends to tighten it up?

Harper Lee, known in her childhood as Nelle, was next door neighbors with Truman Capote. Capote was the model for the character Dill in TKMB, he is by most accounts a likely suspect, though others say that theory of Capote as the ghost was long ago discredited.

But it's not as if you need us at Rare Book Hub to tell you all this -- every reviewer and publication on the planet has weighed in on Watchman including the New York Times, Wall Street Journal, Hollywood Reporter, Boston Globe, New Republic, New Yorker, Bloomberg's as well as a broad contingent from the scholarly and archival world. Haven't heard enough? Facebook feeds and the bookseller listservs were filled with the kind of buzz that points directly to the cash register.

At best this volume is a footnote to Lee's literary reputation and might have one day served as dissertation material for some worthy English major. But in the hands of Harper Collins it has become a monetary bonanza of rare and vast proportion and will likely remain so until the word filters out that it is not a very good read.

If you haven't read or don't admire Mockingbird you will absolutely put this novel down and leave it unread. In the end the reputation that suffers is not Atticus Finch; the reputation most likely to be damaged is Harper Lee.

Many have speculated that the reason Lee became so distant and withdrawn after the first book's initial success (and why there were no sequels or other books written) was she knew it was more of a collaborative effort than entirely her own work. If it really wasn't her own, it would make perfect sense that she became acutely reluctant to be in the spotlight. It is well known that she returned to Alabama where she kept a low profile for a very long time.

That said, a great many people (including your friend here at the Hub) couldn't wait to buy and read Watchman and breathlessly report back that it's a dud. I’d put the long term projected value of this second volume at about 99 cents, and the remainder tables will not be far behind.

Among those commenting on Watchman was Karla Nielsen, Curator of Literature at the Rare Book and Manuscript Library at Columbia University . She wrote to her colleagues on one of the academic listservs: "As many readers ... will have followed, Tonja Carter's statement 'How I Found the Harper Lee Manuscript' in the Wall Street Journal .... raising questions about the sequence of events that led to Harper Collins's decision to publish Go Set a Watchman. Over the last four months, many of the reporters following that story have come through the Columbia University Rare Book & Manuscript reading room to take a look at the papers of Annie Laurie Williams and Maurice Crain, Nelle Lee's literary agents in the 1950s and 1960s." (A link to the Columbia blog post appears at the end of this Rare Book Hub article. It summarizes some of the debates and includes images and an interpretation of some of the documents in question.)

One comment on a listserv populated mainly by book dealers was fairly typical of how older readers viewed the shift in point of view: "From the perspective of the narrative, one must remember that Mockingbird is told from the perspective of a child while Watchman recounts the thinking of an adult. I have had a similar experience. I idolized my parents for their stands on perspective issues of the 60s and 70s. Nevertheless, as an adult I began to learn of my mother's classist attitudes. She supported the civil rights and liberal political candidates. Nevertheless, she wanted a society ‘where people know their place in life.’ One could argue the same revelation came to Scout.”

Also on a listserv Henry Salerno, a New England book dealer, wrote: "Isn't the point of it all that - Go Set The Watchman - was a failure of a novel and that's why editor Tay Hohoff worked with Harper Lee so fervently to transform it into To Kill a Mockingbird? I can see the reasoning to publish it as a large literary footnote to elaborate on the back story of how a masterpiece came to be. Sort the recounting of the making a silk purse out of sow's ear. However, this could be a wonderful valuable lesson or not. I mean, does the knowledge of how sausage is made add to the enjoyment of eating sausage?”

As for Atticus, Nick Basbanes, himself a writer of some reputation wrote on his Facebook page, "The idea that this is the same Atticus Finch through another lens is absurd. He's not a real person, he's a work of the imagination, and he evolved through the creative process to what he became in TKAM. The book that's out there is a variant, plain and simple, should have gone to a research collection somewhere ..... The fact that it was rejected by 10 publishers speaks volumes. She went back to work, toiled tirelessly, and produced a masterpiece. This is shameful, really, what they have done to her. I think her book, however, will endure. "

No matter what happens to Watchman the future of Mockingbird, which comes in multiple incarnations and anniversary editions, special bindings and so forth seems much more secure in both the literary and financial sense.

Looking at the Rare Book Hub 100 most recent book auction records dating back to the year 2009 there is a high of over $18,000 for a 1960 first edition sold in 2009 to a low of $11.75 for a book club edition in 2013 -- and everything in between. As usual, factors such as inscription, signature and accompanying documentation also influence the prices realized. Reaching a little farther back an inscribed copy including a signed letter to editor William Targ brought $22,400 in 2004 while the highest price shown in the RBH records was for an inscribed copy which sold in 2005 for $45,600.

Lawyer for Harper Lee Describes the Discovery of Watchman manuscript

New York Times hints at another book yet to come

Our favorite review in Boston Globe-Watchman more characters than a Russian novel:

We are all Atticus Finch