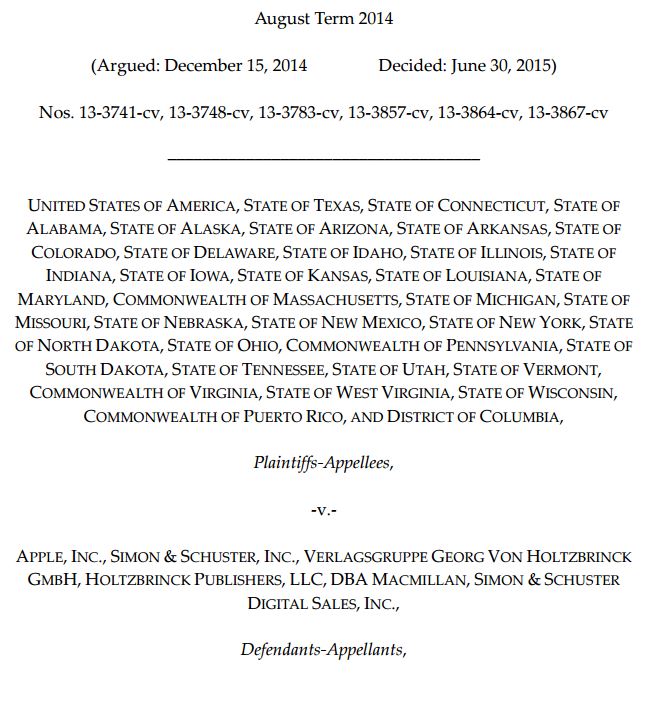 Apple has lost its appeal.

Apple Inc., the computer/iPhone maker that is now the world's most valuable company, lost its appeal of a lower court ruling that it had engaged in price fixing of electronic books with five publishers. The result means that Apple will be distributing $450 million to purchasers of ebooks who paid more for their books because of the agreement between Apple and the publishers. In accordance with an earlier compromise between Apple and the plaintiffs (the U.S. Government and numerous states), Apple has agreed to pay this amount even if it decides to appeal the Appeals Court decision to the Supreme Court.

This case dates back to early 2010 when Apple, on the verge of releasing its newest device, the iPad, decided it wanted to go into the business of selling electronic books. The iPad was suitable to provide competition for Amazon's market leading Kindle e-reader. There was one problem. Amazon was selling ebooks for little mark-up, sometimes even at a loss. It wanted to sell its Kindles and wanted to dominate the ebook market before anyone could offer serious competition. While Apple wanted to provide competition, it did not want to lose money. Amazon built its business on thin margins, but not Apple. Apple wants to eat its cake and have it too, that is, come to dominate a market but still make large profits in the process. Amazingly, it is very good at doing both at the same time.

However, this time, the court determined, Apple stepped over the line. Apple and the publishers conducted numerous phone calls, and when all was said and done, the publishers revised their pricing schedule. Instead of charging a fixed wholesale price for their books, and letting retailers determine at what price they would resell them (even if for a loss), the publishers would set the price at which all retailers had to sell their ebooks. The retailers, in turn, would buy them at a wholesale price that would give them a fixed profit margin. The mandatory retail prices the publishers set were mostly higher than what Amazon had been charging. Ebooks Amazon sold for $9.95 would now mostly be priced at $12.95 or even $14.95.

Apple maintained it never conspired with the publishers to fix prices. It said it merely informed them what sort of pricing structure was necessary for them to enter the business. This is legal. What is not legal under antitrust law is for multiple companies to agree to set prices together. In this case, the lower court ruled that Apple had worked with the publishers together to set prices. The lower court even went so far as to conclude Apple was the ringleader in getting the publishers to agree to all change their pricing structure.

This was the claim that was appealed. Did Apple lead the publishers into setting new prices, or did they just tell them what they needed and the publishers, whether independently or in concert with each other, decided to set the new prices on their own? In looking at phone records and various statements made by company executives, the lower court concluded this was a conspiracy spearheaded by Apple. Now, the Appeals Court, on a 2-1 vote, has agreed.

Apple also argued that rather than being anti-competitive, the new arrangement opened the door to new competition. Previously, with Amazon's low to below-cost pricing, no one else could afford to enter the market. You almost had to buy your ebooks from Amazon. They controlled 90% of the market. Under the new pricing model, where Amazon could no longer use its power to viciously undercut competitors, lots of new ebook sellers entered the market. The Appeals Court quickly shot down the "benefit" of that type of competition:

"Plainly, competition is not served by permitting a market entrant to eliminate price competition as a condition of entry, and it is cold comfort to consumers that they gained a new ebook retailer at the expense of passing control over all ebook prices to a cartel of book publishers — publishers who, with Apple’s help, collectively agreed on a new pricing model precisely to raise the price of ebooks..."

After the verdict was announced, a spokesperson for Apple indicated they were considering their next step. They can appeal to the Supreme Court. The spokesperson indicated Apple wanted to put the case behind them, but reiterated that Apple had done no wrong and that there were principles involved. That is all that is left, because Apple had earlier agreed to pay the ebook buyers $450 million if they lost this appeal. Even if the Supreme Court finds Apple as pure as snow and overturns this decision, Apple will still have to pay the $450 million. The parties settled on this figure (about half of what plaintiffs wanted) to set a predetermined amount of damages to Apple in case of a loss, rather than letting the court pick a price which might be more or less, or giving Apple a chance to reverse the decision on further appeal. Exactly how this money will be broken out and paid remains to be determined. Based om an earlier settlement with the publishers, the time frame for purchases to qualify for refunds is likely to be April 1, 2010 – May 21, 2012.

One more thing – no need to cry for Apple. The company is worth over $700 billion. The $450 million is mere pocket change to Apple. On the day the judgment was announced, Apple's stock jumped almost $1, raising the company's value by another $5 billion.