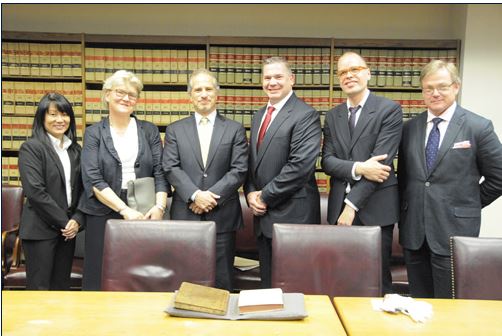 Two more books, discovered missing from the National Library of Sweden over a decade ago, made their way back home this past month. They are among at least 56 old and valuable books taken from that library over a decade by a former employee. Slowly, many of the books have been tracked down and returned to their rightful owner. These were the latest, but not the first, to be found in America. As before, they were discovered with innocent purchasers, bought at auctions or from dealers who themselves were unaware that the books were stolen. Thief Anders Burius was very good at disguising the source of his valuable books.

Burius was hired by the Swedish Library to head up its manuscript department in 1995. Burius had already been stealing books for a decade by that time, though obviously the library was unaware. Among his responsibilities were increasing security of the collections, particularly after the case of the razor-toting British map thief Peter Bellwood, who also "visited" libraries on the continent, became known. These responsibilities, plus the obvious inside aspects of the thefts, made Burius a clear suspect when they finally were discovered.

In 2004, a library patron asked to see an old map of the Mississippi River. It showed up in the library's online database, but was nowhere to be found in the collections. Burius had removed listings from the library's old card system to make the books "disappear," but digital records were evidently more challenging. This led to a thorough inventorying of the collection. By the time it was completed, librarians realized that over 50 books were missing.

Burius understood where the fingers would soon be pointing and concluded his discovery was inevitable. He confessed to a colleague and went off to the police station to report what he had done. Burius was immediately arrested and placed in custody. For three weeks, he provided lists of books he had stolen, over 50 from the Swedish Library, and almost as many from other sources. He was then released from custody to await trial. It never happened.

In the early morning hours of December 8, 2004, there was a massive explosion on the top floor of the apartment building where Burius lived. He had quite literally chosen to go out with a bang. It took four days to find his body in the debris. Burius had slit both his wrists and the gas line. A spark completed the job. His concern for his neighbors was no greater than his concern for his employer. Eleven people were injured and more had their homes destroyed. The criminal case was closed.

Burius had taken many of the books he stole to auction, primarily German house Ketterer Kunst. He used a fake name – Karl Fields – and his knowledge and sophistication with books avoided raising any red flags as to his legitimacy. He certainly did not appear anything like a thief. Meanwhile, he removed all markings from the books that might have caused suspicion. Additionally, since the Swedish National Library was unaware of the thefts at the time, none of the items Burius sold ever showed up on a missing books list. The books were auctioned and among the unsuspecting buyers were some of the top dealers in America. They too were fooled, Burius having done such a good job of covering his tracks. Finally, some books were sold on to customers who likewise were fooled. One of these two books just returned was ultimately purchased by Cornell University. The book had traveled from auction house to bookseller to university without anyone ever being the wiser.

Harder to understand is the Swedish Library's slow speed in aggressively pursuing the stolen books. Sometimes, libraries are embarrassed to publicize their shortcomings. Perhaps there was some reluctance in chasing down purchasers when their own deficiencies in security led innocent dealers and collectors to buy their books. A report was issued by the Swedish government in 2008, and there was a Swedish radio documentary in 2009, but the books were no longer in Sweden by then. The case remained mostly dormant until a member of the library staff noticed one of their books being offered for sale by a New York dealer. Once the Arader Galleries was contacted and confirmed the library's claim, they returned the book to Sotheby's, where it was purchased in 2003. They in turn sent the book back to Sweden. In 2013, the 19th Century Shop voluntarily returned a couple of books purchased many years earlier at Ketterer Kunst.

This latest return of books covers two antiquarian titles, Oculus, hoc est: fundamentum opticum... a 1619 book by Christopher Scheiner, and Pratica di fabricar scene, e machine ne’teatri, a 1638 book by Nicolo Sabbattini. The FBI makes it simple for us by referring to them as the "Scheiner book" and the "Sabbatini book." The Sabbattini book was purchased by New York bookseller Martayan Lan in 2001. The Scheiner book was purchased by New York bookseller Jonathan A. Hill in 1999 and later sold to Cornell University. Again, no one in the chain had any idea the books had been stolen and the current holders both voluntarily returned the books to the Swedish Library.

At a returning ceremony with U.S. officials and representatives of the Swedish Library held in New York, Deputy U.S. Attorney Richard Zabel said, “For hundreds of years, the National Library of Sweden’s collection of books, maps, and manuscripts was treasured by the kings and queens of Sweden. In many ways, the Library contains the cultural memory of Sweden. The theft of pieces of a nation’s memory and heritage creates holes in its intellectual soul. There is no repair for such holes without the recovery of what was taken. I’m proud that this office has been at the forefront of recovering what has been taken from many different nations’ cultural histories, including Sweden today."

Book theft is an enormous problem for libraries with valuable collections. Controls have often been lax, and even where not, theft by insiders, who can change records, is particularly difficult to find. Many books are requested so infrequently that it may take years to notice they are missing. In the past few years, libraries have become increasingly aware of the dangers and are taking many steps to combat the problem. Still, it is not an easy challenge, and no one has any idea how many books stolen at earlier times are still out there. Libraries will need not only to step up security but find ways to discover and report missing items much sooner. Burius had a 10-year head start, enough time to fill scattered booksellers' and collectors' shelves with stolen material. Books stolen by earlier generations of thieves are likely gone for good. And all of this is as if libraries don't already have enough problems to deal with today!