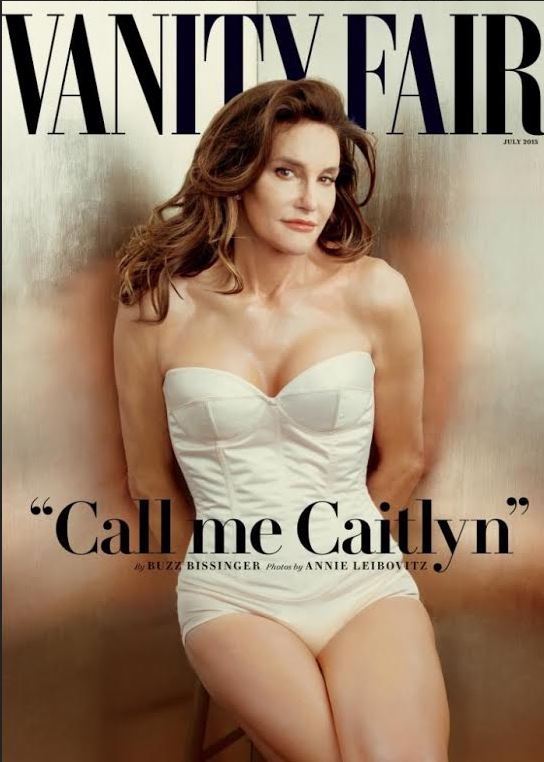 Is it collectible? Time will tell: Bruce Jenner, an Olympic athlete who chose to change his gender to female was on the cover Vanity Fair last month.

The "culture wars" is a phrase that is bandied around a lot in the news. Current American battleground issues include legalized recreational drugs, the gender spectrum, sometimes abbreviated to LBGT (Lesbian, Bi, Gay, Transgender) and gun politics. At no time were the skirmishes between older traditional values and newer norms more evident than June 2015.

June was the month that the US Supreme Court ruled that same sex marriage was legal in all 50 states, and in the words of Newsweek the "U.S. Constitution's guarantees of equal treatment under the law and due process prohibit states from banning same-sex nuptials."

That was also the month that saw a high profile formerly male Olympic athlete hit the cover of Vanity Fair profiling his transition to a female identity. It was the same month that a white woman in a leadership position in the NAACP was outed by her two Caucasian parents as a racial impostor, but the woman claimed in her own defense she "self identified" as Black.

In June CBS reported Colorado has licensed more than 300 recreational marijuana dispensaries, ringing up $303 million in sales last year -- $52 million in tax revenue. Even as that news was sinking in, a whole host of other media sources reported that many other states were headed toward legalizing and monetizing recreational pot.

And just to be sure that all the hot buttons were pressed on June 23 Amazon, eBay and Walmart all announced that they would stop selling Confederate Flags in the wake of racially motivated shootings at a Black church in South Carolina. Whether the ban would apply to historic items was not clear.

It's not news that cultural norms are changing, but what might be of interest to RBH readers is whether these cultural transitions show up in increased collecting interests and prices realized. Just as feminist, Black, Latino and other ethnic areas have seen an upsurge in scholarly and media interest so too have the culture war topics and writers associated with these points of view continued to find an audience. When it comes to LGBT a few internet sites even list authors with these orientations by their perceived public popularity. A few names that show up with some regularity are Brits Oscar Wilde and Virginia Woolf, both frequently in top ten, while Americans Gertrude Stein, Allen Ginsberg and Truman Capote all have long and solid auction records on file at Rare Book Hub.

For example, Oscar Wilde, whose own sexuality was notoriously the subject of a famous law suit in the late 19th century, continues to be widely collected. His books are still eagerly sought after. One title that continues to bring a good price is A Picture of Dorian Gray.

According to Rare Book Hub records, a first trade edition London 1891 went at Swann's earlier this year for $6,250. Last month an online auction at Swann's had the same title realizing $5,000. A signed and numbered copy made $7,200 at Cowan a year earlier. Good prices all but still less than the GBP 16,250 hammer price for the large paper signed and limited copy sold by Sotheby in 2010.

The first appearance of the same work published in Lippincott's Monthly Magazine in 1890 realized GBP 501 earlier in 2015 at Dominic Winter or substantially more than the presale high estimate of GBP 150. In 2014 a similar offering made $1,037 or just slightly less than the high estimate of $1,200 at Heritage.

All of those Oscar Wilde prices are small change compared to the $362,500 paid at a 2012 Sotheby sale for an 1899 edition of The Importance of Being Ernest inscribed by Wilde to his lover Robert "Robbie" Ross.

On the distaff side a quick check of Virginia Woolf prices also look solid. At the high end a 2014 Sotheby sale, Mrs. Dalloway, 1925, Hogarth first edition, realized $27,500. Over the last 90 days eBay sold numerous Woolf titles including a signed limited Orlando in lesser condition for $2,000. A copy of Orlando published by the Hogarth press in 1928, also a lesser copy, brought $250. Altogether on eBay there were 136 Woolf items sold at prices ranging from a high of $2,000 to a low $1.50 for a used paperback copy of Mrs. Dalloway.

Well known does not always mean expensive. The classic Autobiography of Alice B. Toklas signed by both Gertrude Stein and Toklas (1933) sold in 2012 for $1,116 at National Book Auction, while a far less prestigious copy (unsigned) went two years later at Heritage for $15.

Here are a few other recent benchmark prices for LGBT authors:

There still seem to be lots of copies of Howl by Allen Ginsberg floating around, but the 2013 Christie's sale of the 1956 original mimeo sheets of the iconic poem limited to 25 copies made a spectacular $118,750.

Fewer digits but still hefty was James Baldwin's own copy of the script for the stage play, Blues for Mr. Charley (1965 Actors Studio) which went at Swann for $3,120 in 2011.

Recent eBay prices realized for printed materials categorized as "LGBT" within the last 90 days were not impressive and such items that were sold were mostly under $100 for vintage issues of magazines like Mattachine Review.

Asked for comment on recent trends in the LGBT marketplace Alex Akin and John Durham, area specialists at Bolerium Books in San Francisco, responded via email, "The LGBT market has been active for many years, and the impact of it going mainstream is likely to be minimal (although as the subculture dissolves into the mainstream, wrote Akin, adding "John fears that interest may decline"). An early high point was likely the 1970s and early 1980s with broader emergence of the LGBT movement, LGBT publishers going above ground and LGBT booksellers opening all over the country.

"The plague (AIDS) partially wiped out both a generation of potential collectors and booksellers. John thinks this may be one of the reasons for the current limited number of specialists other than ourselves and Elysium Books. Because of our location close to the Castro, in the midst of a city that was an early epicenter of gay culture, we are surrounded by the material and have been able to amass perhaps several metric tons of not only books but pamphlets and ephemera, things like newsletters of gay church groups, activist archives, etc. In most parts of the country, even if you wanted to replicate that it would be very difficult.

"Many dealers have begun seeking high points and including them among the other categories of material they offer. Thus you see firms like Between the Covers, renowned for other sorts of material, offering some really choice LGBT treasures.

"In a way, this mirrors the broader difference between Bolerium, which has more of a wholesale business targeted to libraries and activists, and the more boutique dealers who can focus on prime materials to offer a wealthier clientele.

"There was a time when certain dealers sneered at or mocked Bolerium for having this specialty ," he continued, "(which made John rejoice, since he gets a kick out of irking people). Now, however, they are more likely to scout us for underpriced stuff."

Though web searches relating to various gender key words yielded prolific results. The pickings were slim for "culture wars" and searching for pot or marijuana or titles related to recreational herbal stimulus was also not so much. Perhaps because the penalties for possession of such books can still lead to property confiscation and harsh legal sanctions the true relics of marijuana prohibition have yet to really come to market. Despite the massive trade both legal and illegal what shows up most seem to be Zig Zag pins and Reefer Madness posters, and pot themed underground comics and posters. However, with weed finally going mainstream that may change.

A little higher up the food chain a 2005 Reefer Madness 1-sheet poster for the 1936 film made GBP 600 at a Christie's sale. Real copies of the cult film posters were hard to find and auction records thin. More recently a Reefer Madness reproduction film poster sold for $89.95 on eBay within the last 90 days.

Other eBay items related to marijuana sold within the last 90 days in the books department were mainly how-to-grow manuals. Prices realized ranged from $4 to $45. A 1970s black light marijuana poster sold for $112.46.

Just for the sake of comparison, in the 90 days prior to June 23 there were 896 SOLD listings on eBay for the search term "Confederate flag," with prices realized ranging from a top of $305 for 1896 Tennessee reunion item to $3 for a bumper sticker showing the Stars and Bars flag and the slogan "I don't care how you do it up North." On that date major retailers such as eBay, Amazon and Walmart all announced they would no longer sell the flag or items featuring its image.