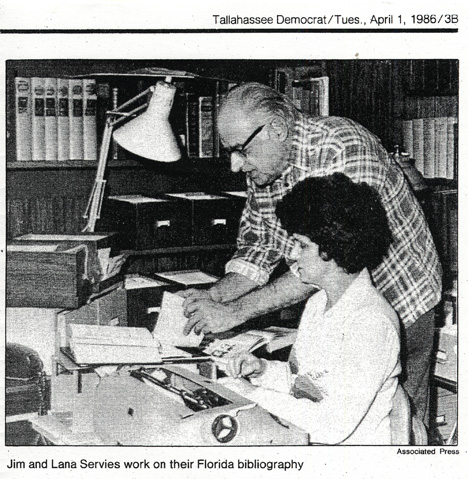 Jim and Lana Servies at work early in their research for the Bibliography of Florida.

Mao Tse Tung said that every journey begins with a single step. For James Servies, who in the midst of his library career took on the construction of two important bibliographies, there have been two long journeys and thousands of entries that ensure that both his bibliographical projects and his name will resonate with scholars, book dealers and collectors long into the future. These projects are the Bibliography of West Florida and the Bibliography of Florida.

The first steps on the path to The Bibliography of West Florida, his first major bibliographic undertaking, began in the mid 1960s when Mr. Servies, then the new Director of Libraries at the new University of West Florida, began to research and organize the bibliographical records that would in time be joined under the description, "a bibliography of historic West Florida and the 10 counties of the Florida Panhandle." Beginning as smaller publications, in time this would become a four volume set of material that begins with Oviedo y Valdes' La historia general delas Indias dated 1535, carrying the bibliographical identifier 1535-1, and continuing through to A. J. Wright's article in Old West, the magazine in fall, 1981, identified as 1981-67, as the last. He undertook this project because, as he explained in the preface to the first volume,

"Few regions of the United States of America have suffered more from scholarly neglect than that portion of the Gulf Coast between Mississippi and the Apalachicola rivers which we here call West Florida."

In creating his bibliography he set out to correct that neglect.

Today this bibliography is somewhat dated. Its last amendments were printed in 1982. As is to be expected there are very few copies left. Jim and his wife Lana have four sets of the 4 volumes, each set priced at $250, a required item for any dealer or collector whose field embraces the 1760s British definition of West Florida.

For many people one very serious bibliography would be their lasting achievement. For James Servies and his wife, it was the warm-up. Beginning again, in the mid 1980s he started work on his Bibliography of Florida, a bibliographically more complete work that is focused on Florida as the term has been defined through time.