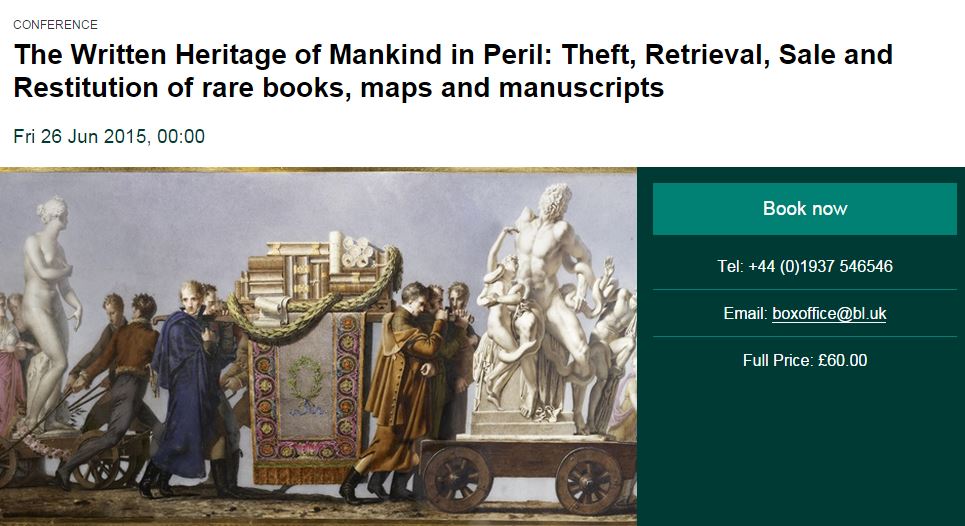 The British Library is sponsoring a major conference this month to tackle the large, though often under-the-radar problem of theft of rare books and related material. Scheduled for Friday, June 26, the conference is titled, The Written Heritage of Mankind in Peril: Theft, Retrieval, Sale and Restitution of Rare Books, Maps, and Manuscripts.

Theft from libraries and other institutions has long been a problem, but much of it has gone unnoticed, the result of poor bookkeeping. Often, libraries have had no idea material was missing. Even harder to notice has been cases where a thief has excised pages from a book, such as maps or plates, and then returned the rarely viewed book to the shelves, no one the wiser. These books and pages can often be worth six figures, but security does not measure up to what you would find in a bank or jewelry store. The temptation for thieves can be magnetic where security is low.

Those who think the risk is limited to libraries and institutions do not understand the law. The library may be sloppy, but the ultimate victim may turn out to be the honest collector or dealer. Purchasing stolen merchandise does not make you the owner. It must be returned to the owner and the owner does not have to pay you a penny to get its own property back. Your only recourse is to the person from whom you purchased the book. If you purchased it from the thief, and that person is gone or has spent your money, you are out of luck. You cannot get blood from a stone, or your money back from someone who has spent it. If you purchased it from an intervening victim, such as a bookseller who bought it in good faith, you can recover your purchase price from that dealer, but that too assumes the dealer has the money to repay you. If he or she has gone broke and does not have the funds to repay you, you are still out of luck.

Four panel discussions are planned for this very busy day. The first addresses the extent of the problem, including some “notorious examples” of rare book theft. The panel includes the former head of rare books at the Royal Library in Copenhagen, international head of books and manuscripts at Christie's New York, and a law professor at Seoul National University. The second panel discusses the legal framework of retrieving stolen books. Panelists are the former chief in the money laundering and asset forfeiture department at the U.S. Attorney's office for the Southern District of New York, the senior legal advisor for the National Library of Sweden, and a lawyer from Berlin. As a note, the Swedish Library was the victim of some major thefts a few years back. The third panel is focused on the perspective of the rare book trade. Panelists are the European head of restitution at Sotheby's London, the President of ILAB (International League of Antiquarian Booksellers), and the founder and President of the 19th Century Shop in Baltimore. The final panel covers preventing theft and trafficking of rare books. Panelists are a representative of the manuscripts, maps, and pictures division of the Swedish National Library, the director of collections at the French National Library, and a senior legal advisor from the Austrian National Library.

There will be an introductory from the head of collections at the British Library. The keynote will be provided by the head of private international law at Marmara University in Turkey. There is, naturally enough, a break for lunch, and a wine reception at the conclusion.

The target audience for this conference is “those who deal with rare books and other priceless written materials, including representatives of dealers, collectors, auction houses, national collections, law enforcement officials, security experts, attorneys and others.” The organizers are encouraging attendees to continue to address the problem and develop solutions in the days after the conference. The plan is to have a follow-up seminar in New York next year.

Along with the British Library, the conference is being organized by the Institute of Art and Law of the Union Internationale des Avocats. For more information about the conference, and making reservations to attend, you can visit the following website: www.bl.uk/events/the-written-heritage-of-mankind-in-peril.