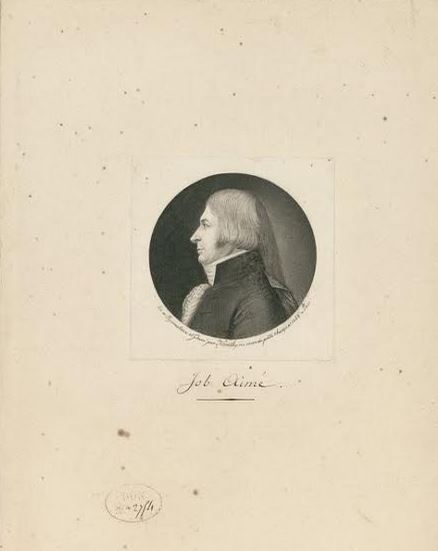 “I had loved the French Revolution with a passion,” confesses Jean-Jacques Aymé in his book Déportation et Naufrage de J.J Aymé (Paris, chez Maradan). But that was before being arrested following the attempted coup of Fructidor 18th, and being deported to the land of the “dry guillotine”, Cayenne (French Guyana). His relation first came out with no date, but he wrote: “Two books have already been published on the matter.” He meant Ramel’s and Pitou’s, respectively published in 1799 and 1805 (see previous articles). Though deported over the same reasons, he was sent to Cayenne on another ship, and didn’t come across them over there—Ramel had already escaped by the time he arrived.

Despite his stated lack of resentment, Aymé’s book is a bitter one. His tone is cold, deprived of humour—and his words are tough. In his very first sentence, he stated: “Nothing appears less interesting in the great History of the Revolution, than the episode of individual misfortunes.” And his particular misfortunes, he thought, “portray the cruelty of those who have usurped the sovereign power.” As an idealistic young man, Aymé had joined various political movements to partake in the building of the Republic—even the famous Conseil des 500. “I wished to have known no other sovereign power than the law,” he confessed, “and I felt I was pursuing a delusive chimera.” Reality soon caught up with him, and he found out that passions could lead you to hell—or to Cayenne, which was almost the same. He claimed he held no grudge against anyone, but denounced the hypocrisy of deportation—then seen as a humane punishment compared to the guillotine. “Ye coldly barbarous men!” he wrote. “Accompany me in the details I am about to offer, and your compassionate hearts will enjoy a spectacle worthy of all their boasted clemency.” Running away from the wrath of the Directoire the day before his being arrested, Aymé escaped his enemies for a while, and was hiding as Ramel and his friends were taken to Rochefort “into iron cages” (see previous article). He was eventually arrested at a checkpoint, and then sent to the prison of the Temple, which he called a new Bastille. During the journey that led him to Rochefort, he had several occasions to run away—but he didn’t. Unlike Pitou or Ramel, he gave quite a satisfactory reason for this: “I knew that the little property I had was under sequestration.” And Raymé was no bachelor: “Let me at least save my wife and children from the horrors of indigence.” Thus he boarded the ship La Décade for a 96 day-long journey at sea—the antechamber of the tropical hell awaiting him.

Pitou drew up a list of the deportees to Cayenne in his book, and Jean-Jacques Aymé appears in it: “Aymé (Jean-Jacques), 46 year old, people representative.” For his part, Ramel only mentioned one “Job” Aymé. The confusion apparently came from some misunderstanding early in his career. “It is not only in Europe that I have been obstinately called Job Aymé,” he wrote, “the same error has passed the seas and was established at Cayenne (...) It was in vain that I called myself Jean-Jacques, for I was positively assured that it was Job.” Was it because he was given almost more than a man can bear? The English publisher of his book (London, J. Wright—1800), maybe uncertain of the correct spelling, took no chance, and credited the book to J.J. Job Aimé—with a i instead of a y in Aymé (“aimé” means “loved” in French).

In Cayenne, Aymé and his likes were under the care of Agent Jeanet Dudin, whom Pitou described as a mean man, appointed to Cayenne by Danton, his relative. “When this great revolutionist (Danton) had reaped the fruits of his principles,” wrote Aymé, “Jeannet was alarmed and flew for safety to the United States; but when Robespierre had, in turn, paid the debt due to his crimes, Jeannet returned to Cayenne.” Aymé also portrayed him as a cunning man, “caring as little for republicanism as for royalty, and considering nothing but his pleasure and his interest.” He was, in short, a complete pirate. Ramel had very harsh words against him too, and Aymé sent his reader to his book for more details.

A merchant named Belleton, who was living in Cayenne, saved Aymé as he was about to be sent to the deadly desert of Konanama, where the deportees suffered from the climate and the dreadful insects, dying by the hour (see previous article). “We are from the same province,” Belleton told the unfortunate prisoner, “I am come to offer (...) a place upon my plantation.” Indeed, the French colonists in Cayenne saved many deportees. The legal situation of the deportees was quite complex, as they were urged to create their own establishment—but it was made utterly impossible for them to comply. To be employed by a colonist was then the best thing that could happen to them. Meanwhile, the Directoire boasted of being magnanimous. “Read the newspapers,” wrote a bitter Aymé, “and you’ll find out that “Cayenne is a wonderful place (...)”, that “the deportees don’t need anything...” Indeed, several of them don’t want anything any more; they are dead.”

Aymé went through the usual torments linked to Cayenne: fever, disease, loss of weight and physical weakness. But Belleton did spare him the worst. Talking about Barbé-Marbois, Rovère and Brothier, “who alone remained of the first deportation”, as they were about to be transferred to Konanama, Aymé underlined: “Although they were in a very bad situation, at Sinnamary, they knew Konanama was still worse.” But when his benefactor left him alone on his estate, Aymé rapidly felt lonely. Yet, from the bottom of his pit, he found some kind of comfort: “I oftentimes went on board my canoe with a book,” he wrote, “at the rising or setting of the sun (...) as the tide bore me gently along, and to enjoy the beauty of the surrounding scene. (...) The finest circumstance that occurred to me on these occasions, was the descent of a company of flamands, with their flame-coloured plumage (...).” An unexpected description of hell, isn’t it?

One interesting passage of Aymé’s book concerns black people, or the Negroes as he called them. He said they were not the perverted creatures described by most white people, but noticed their animosity: “It is certain that they do not love white people, and that they apply themselves to do them mischief. If they perceive that anything belonging to a colonist is likely to receive injury (...), they will take care not to inform him of the circumstance, and to do everything in their power to retard his discovery of it.” Their society was very active at night, when they exchanged all sorts of crucial information. “Their first question, when they meet one another (...) is, what news? but it is in vain that you put the same question to them.” Just like in any colony, the Negroes never really mistook the interest of their masters with their own, and “to do nothing is their supreme felicity”—a sort of revenge against slavery. “The negro who has neither wants nor ambition will never work but by compulsion; (...) in one word, (...) the liberty of the blacks is incompatible with the prosperity of the colonies. At the same time, I would not have it imagined that I invite government to give them back their irons, and to recommence the traffic (...). Let us not believe those who tell us that we save the lives of those unfortunate beings whom we go to Africa to purchase since they were prisoners of war whom their conquerors would exterminate, if they did not entertain the hope of selling them to us.”