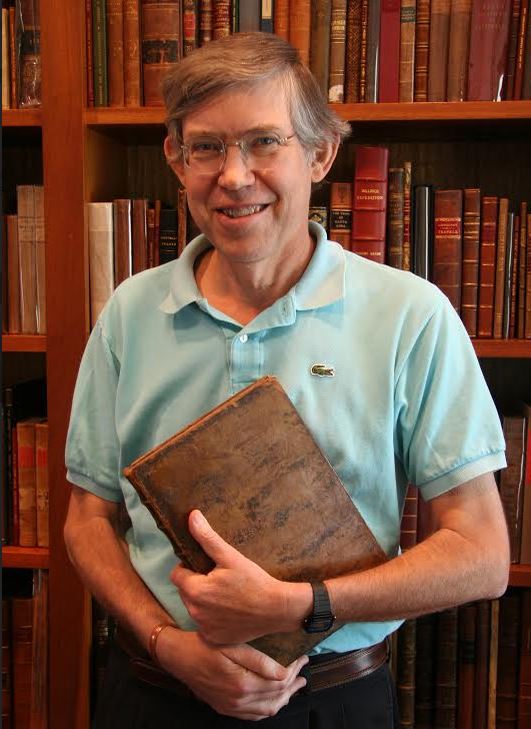 William Reese, 60, the noted expert on rare Americana is celebrating his 40th year in the antiquarian book trade.

"Work hard for 20 years and then only buy things you've never seen before," says William (Bill) Reese, who will be 60 in July. Reese is one of the premier dealers in antiquarian Americana and considered the expert's expert in the buying and selling of rare books and manuscripts in that field. The quote is from Wright Howes, Chicago bookseller active 1920-60 and author of the standard reference work, U.S.iana. But the advice is pure Reese.

"In the modern scheme of things," he adds, "there are only three possibilities, the best copy, the least expensive copy, and the only copy."

Reese, who heads the antiquarian firm which bears his name, is based in New Haven, Connecticut. He is celebrating his 40th anniversary in the trade this year. His catalog to mark that occasion is filled with fifty stellar items including a manuscript copy of the 1765 Stamp and Sugar tax acts, authored by the English, which paved the way to the Boston Tea Party and the American Revolution. Asking price $2 million.

Said Reese, "The two acts – the Sugar Act and the Stamp Act, which are sold together – are the triggering points in the path to American Independence.  One might say these are the hinge of American history.  These are the original manuscripts.  Other American historical documents have sold for much more without having the significance of these documents. For example, Washington’s copy of the first Acts of Congress sold for over $8 million. For one of the most important pairs of documents in American history to be worth $2 million when one can hardly buy a painting of importance for that sum, does not seem extravagant."

Reese is noted for his cool authority and confident scholarship. Collectors and buyers trust his eye for innate value and knowledge, not only what to buy but when. One story he tells is about the Gettysburg Address offered in 2004 at auction at the 2nd Malcolm Forbes sale. Reese bought it for $300K, raised the price to $600K and then found an international university to take it at $850,000, and think it was well worth the price.

As he recalls, "Shortly after I bought it I was asked what I would take for it and said $600,000 on the theory of a quick turnover. But I always envisioned it as being worth more, so it’s not like I was raising the price beyond my original idea of value.  This auction was a perfect instance of what I call 'hiding in plain sight.'  At major sales, where the big buyers are trying for lots of expensive things, in my experience something always falls through the cracks because everyone is stretching to get what they most want."

Reese's career trajectory has been different from most of his colleagues. He started dealing from his dorm room as a Yale undergraduate. A $40,000 personal loan from his family allowed him to launch his business and purchase his first collection. "I paid it back within six months," he said, and has been going strong ever since.

"I have worked closely with the Yale Library since my undergraduate years.  I endowed a number of fellowships at Beinecke, and annually fund fellowships there and to send Yale librarians to Rare Book School."

According to Reese he was on the committee for the new Music Library and personally raised the funds for its Rare Book Room. He served as the chairman of their friends group, Yale Library Associates, from 2005 to 2013 and has been a trustee for decades.  He is currently vice chair of the Library Development Council, which coordinates major gifts.

"I served for some time as advisor to the Western Americana Collection in Beinecke.  When the Forbes Smiley map thefts took place, I was asked to take over the internal investigation, which I coordinated with Yale and the FBI."

His company has generally handled the Beinecke’s auction bids in the U.S.  When Reese served as the main appraiser and book advisor to the estate of Paul Mellon, he coordinated the transfer of all of the materials given to Yale.

He has also curated a number of exhibitions in the Beinecke, including the 1992 Columbian Quincentenary show and the Mellon memorial show in 2002 (both of which have published catalogues).

A generous patron, Reese has also given the Library numerous things, including comprehensive collections of the British World War I poets, Robert Graves and Siegfried Sassoon. "On the flip side," he said, "Yale has been a major customer of mine over the years, and I’ve sold them many wonderful things over the decades."

In Reese's view two of the most important ingredients for a successful dealer are "contacts and capital." Lacking capital he recommends: "1) more contacts, especially visiting customers in person to understand what they want; and 2) to seek to turn inventory over as rapidly as possible, which is a lot easier if you know exactly what your customers want."

In answer to the question "What advice would you give to others on how to achieve expert status and the credibility that comes with it?" he replied:

"Try to be a scholar, by which I mean issue catalogues with respectable research and good writing.  Take part in scholarly conferences.  If the spirit moves you, do research for publication."

As for the current debate on the values for items at auction vs. those purchased through dealers, in his opinion it's not where you buy but how:

"The most important part of any antiquarian business is buying right.  I see many dealers not thinking through before they buy what they think they can sell an item for. This is especially true at auctions, where it’s easy to get carried away and go one more bid. Iron discipline in what one will pay means you don’t buy a lot of things you’d like to.  But auctions are very imperfect markets, and there are opportunities."

One of the things Reese has done consistently since his earliest years is owning books in partnership with other dealers. He pointed out this practice, "halves the capital investment and opens up new potential customers.  I don’t think it doubles them because some customers, especially the big institutions, are known to all; but many private buyers deal with only a few dealers or the ones with whom they’ve established a good relationship."

In his own dealings Reese quoted JP Morgan's famous 1913 opinion, "Character outweighs collateral." In his view, "If you trust one another it can survive on a handshake."

"I believe successful partnerships rely on rigorous inventory control and bookkeeping," he continued," and that the partners must have absolute confidence in the honesty and reliability, personal and financial, of their partners.  Clarence Wolf of George MacManus Co., one of my primary partners, is someone I’ve known for forty-five years.  In all that time we’ve never had a misunderstanding over a business transaction."

After 40 years in the trade he noted that often times the same material previously sold comes to market again. The market, he observed, does recycle, but many of the best things are more or less permanently out of reach and the hardest part of his job is "finding the good material."

Reese didn't have a lot of predictions, but one thing he sees in the future is smaller and lesser special collections will eventually come to market:

"It’s inevitable that many institutions won’t be able to afford the luxury of a rare book collection.  The mission of city libraries should be to help people get access to information, and today that means computer terminals.  For a small college, if I were the librarian and had to choose between the cost of subscribing to online assets that would bring millions of books to my students, or special collections, I’d choose the former. These are not choices anyone wants to make. It’s easy to attack the de-accessioning institutions, but in the economic environment most of these places are in, the missions of access and education have to come first."

As for the trade itself, it's his view that it was "far easier to start in the business forty years ago.  The big advantage to an unknown dealer was the institutional buyers, who were generally very democratic: they bought from whomever had what they needed.  To private buyers, who now dominate the top end of the market, reputation and experience are most important."

"Bill Reese has been my dealer for 25 years," said one of his upscale clients who characterized him as “independently wealthy and very very smart."

With Reese, he continued, "money, per se, does not play the deciding role. Where the next dollar is coming from is never his motivation. As the seller he always takes the long view.  If he issues it in a catalog at $5,000, he’s not going to cut the price, and re-catalog it lower. He’s sure of himself on value and importance.  If he says it’s valuable it’s because he’s certain and his opinion is widely respected."

To which Reese responded "I guess I could be called independently wealthy now, but I wasn't when I started." As for taking the "long view,” he termed it "an advantage of accumulating some capital, which is hardly unique to the rare book business."

To dealers who haven't reached his own lofty heights, Reese gives the following advice:

1.      "The most important thing is buying right so you can sell right.

2.      Play to your strengths.  It’s better to be the master of some genre, no matter how small, and build out from there.

3.      Hit the road and see people all you can, not just at shows.  A personal visit builds relationships and helps you know what your customers really want.

4.      Do right by others and it will mostly come back.  That’s a maxim for all business.  I’ve gone out of my way to help many colleagues and scholars without expecting any return, and it’s come back to help me in ways I never would have expected."

While he stressed the importance of "continued application of knowledge," he was also quick to point out the role played by "the lucky chance, serendipity, you may want to believe in a perfect market but …. books are as imperfect as possible."

"The Internet has flattened the steep learning curve and made information accessible that formerly was only cult knowledge.  Know what you do, figure out what is important, many people miss things because they fail to see the significance, there will be some bargains, wait - watch."

Reach William Reese and his staff via email at: coreese@reeseco.com.