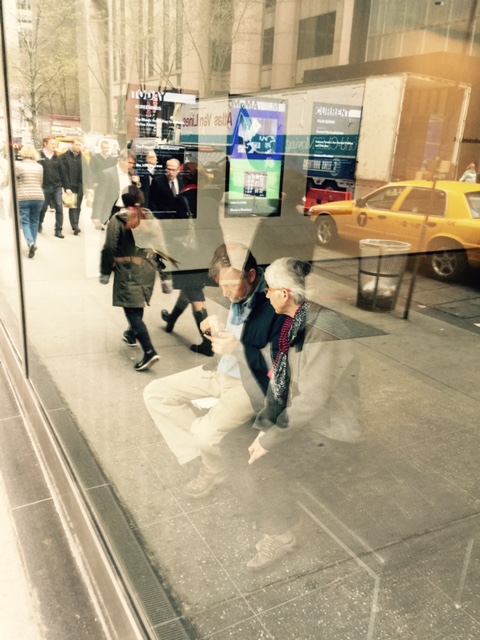 Collectors live in their own world / image taken outside the MOMA by B. McKinney

I recently heard that an ABAA commentator, Greg Gibson, mentioned [actually I think reiterated] that the Americana Exchange and its successor, the Rare Book Hub, are anti-dealer.  This is not the case.

We are pro-collector and I’m sorry if this offends anyone in the trade.  But I will remind you that without collectors there will not be any trade.  You are dependent on those who read your catalogues, take your advice and buy what you offer.  And collectors want to do this, within reason.

But when the disparity between auction realizations and dealer asking prices becomes too great it encourages collectors to consider buying at auction.  From my experience I’d say they do this reluctantly.  For many, collecting is a passion but it’s not one they devote themselves to full time.  Buying from dealers is more time-efficient, buying at auctions potentially less costly but more work.  When the difference is small I think collectors usually buy from dealers.  When the difference increases so too does the tendency to bid at auction.  Book collectors are not dumb although Mr. Gibson in a recent blog posting wants to suggest some are.

Here is an excerpt from Mr. Gibson’s recent column about the New York Book Fair.

All the things I'd seen and heard [at the book fair] needed to be considered, digested, put in perspective.

Most remarkable was a story told to me by a colleague with whom I'd done a great deal of business over the years.

He had a wealthy, impulsive, and very skittish customer who had become convinced that all dealers were, to a greater or lesser degree, stacking the deck against their customers, and that auctions were the only fair and transparent market.

It makes sense intuitively – people competing openly against one another rather than trusting any single individual. As Forbes Magazine put it:

Auctions, in theory anyway, determine price and possession in accordance with the laws of supply and demand, and adhere, again in theory, to some measure of transparency: if you want something, you just pay more for it than anyone else will, and the price—but not the purchaser—will be a matter of public record.  Gallerists, by contrast, unilaterally determine a sale price, and then anoint a buyer, based on their own arcane calculations of what’s best for their artists, their clients, or themselves.

Substitute “book dealers” for “gallerists” and eliminate “artists,” and you have a succinct summary of the mindset of my colleague's skittish customer. Certainly, auction rooms have been vigorously promoting this view, and venues like Rare Book Hub, for example, publicize auction houses while suggesting that private dealers are inefficient and obsolescent, if not downright untrustworthy.

But back to my colleague and the wary customer. Inevitably, as his high opinion of auction houses solidified, the customer began buying exclusively at auction. My colleague had a great deal of interesting material to offer this fellow (some of which he'd bought from me) but was completely frustrated by the customer's steadfast refusal to deal with a “middleman.”

So my colleague went into partnership with a prominent auction house, which purchased an interest in the material he had intended to offer to his customer. This material will be featured in a forthcoming auction. The wary customer will get the catalog, of course, and he'll also get a friendly call from the auction house, doing him the favor of alerting him to some interesting material that will be coming up for sale. Presumably the customer will purchase the material - probably at prices considerably in advance of what my colleague would have sold it for – completely satisfied that he'd cut out the middleman (my colleague) and had made his purchases in the most open and transparent market.

It's just a story, I know. Typical of the juicy tidbits one picks up at a book fair. But here's the takeaway:

While it is easy to point to the Internet as the major game changer in our trade over the past few decades, the rise of the auction houses has been every bit as disruptive to what once passed for the norm. Auctioneers have been wildly successful in promoting themselves as the only fair and transparent venue, and now that they've gained dominance they've begun to squeeze – with buyer's premiums up to 25% and with an ownership stake in more and more of the material being offered for sale. When I started in this business in the 1970s, established dealers could routinely expect calls from estate lawyers, collectors, or institutions interested in selling material. The times they are a changin'.

In Mr. Gibson’s account a collector that buys only at auction is victimized by a dealer and auction house that collude to get the collector to pay more at auction than they would privately.  What he is actually suggesting is that some collectors are stupid.  I would submit that dealers who think collectors are fools will struggle, as customers can sense when dealers think of them this way.

There may have been a time when, to collect, dealers were absolutely essential but by and large they are less so today.  They are now part of the mix, an important pillar but today only one of them.  Auctions loom large because the disparity between dealer prices and auction realizations has grown so extreme.

For those that miss this point while they are actively collecting, they often, at the end of their careers, ask dealers if they can sell their purchases back.  They sometimes can but often encounter limited interest.  It’s at this juncture that we at RBH are most often asked for advice.

Two questions dominate these conversations.  “Can we help them sell their books?”  To this question we always listen, irrespective whether they are a member or not and then suggest possibilities.

The second question is “how can I tell if my material is valuable?”  Typically we send them to Abebooks for a first look.  If the material is valuable they can call us back to discuss membership.  At other times, when only one or two books are involved we simply run the searches for them at no charge.

The issue of where to sell is often complex.  Alternatives are discussed, suggestions sometimes made.  The process is relatively quick although sometimes painful because what new buyers will pay is not necessarily as much as what was earlier paid.  We offer this advice entirely based on what is best for the client.  They may or may not be members but we accept no consideration from either side.

My main goal with the Rare Book Hub has been to build a bridge to the next generation of collectors.  The changing dynamics of the field, the enormous databases at easy reach and the prolific increase of auction houses and auction events are all outgrowths of increasing electronic capability, increasing knowledge, and wider collecting choices.  It is not my goal to protect the world as it was.  It is to secure a place in the emerging world for the book collector so to preserve this extraordinary adventure.  Many dealers are working just as hard to build a bridge to the future.  I know.  I buy from them.

So you’ll get no apologies here.

And a note about the image.  While in New York Jenny and I visited the MOMA.  Later, standing outside I noticed through the front windows a couple inside deep in thought and discussion.  Not wanting to invade their privacy but wishing to capture their intensity I took several shots at an oblique angle and managed to capture their intensity and the reflected complex world on the street.  This to me is what it is like to be a collector.  Collectors live in worlds of their own construction.  They are precious and important.  To see a larger version of the image click on it.

Editors Note:  Since publishing this piece we have received a comment from Kol Shaver of Zephyr Used & Rare Books and include it here..

Just wanted to let you know that I read with great interest your oblique reply to some dealers in the trade about Americana Exchange/Rare Book Hub’s impact on the world of book collecting. My colleagues and I here in the Pacific Northwest have continually emphasized that we cannot separate the antiquarian book & ephemera collecting world into collectors and dealers — we’re all in this together, and we as dealers must continually strive to quest for and present the most interesting and important material we can find. This definitely involves buying and selling material at auction, and I suspect that a “significant” client’s move to buying exclusively at auction has more to do with their own development as a collector, and much less to do with the dealer from which they have been purchasing. Great customers will continually come and go as their collecting interests change, they face challenges of divorce, death in the family, or even something as simple as buying a house — often all taking place unbeknownst to their regular bookseller. Obviously we rare book dealers view anyone’s waning interest as suspect because our passion burns continually, so we must continually expand our areas of interest, hunt for unique material, and more importantly fulfill our obligation to educate our clients, and place the material we’re offering for sale within its’ historic context. The number of association copies, archives on the verge of being broken up, manuscripts unrecognized by anyone other than a specialist, and author’s copies which have languished unnoticed for centuries create an ongoing necessary requirement for booksellers questing for new knowledge and material -- I once catalogued for B&L Rootenberg a copy of the Kepler’s Rudolphine Tables, 1st edition, which turned out to be one of the few copies Kepler had taken with him to the Frankfurt Book Fair direct from the printing press, with corrections in his own hand, something entirely unnoticed by a significant German auction house from which it was purchased.