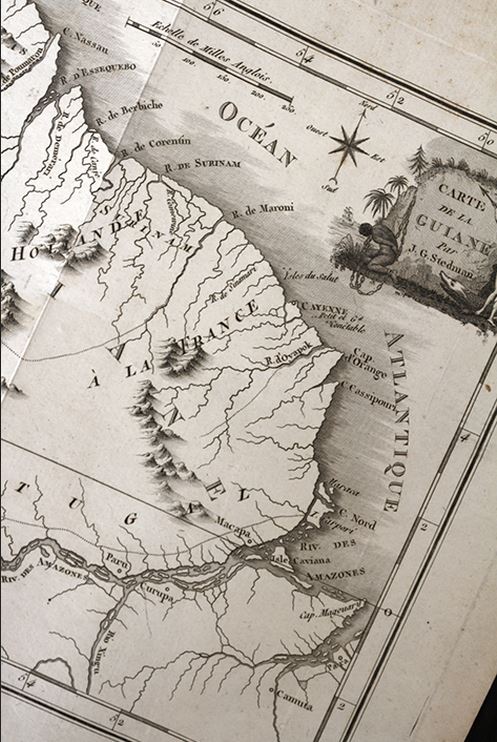 Jean-Pierre Ramel wasn’t really welcome to England—see below. But Bonaparte soon gave him permission to come back to France, where he returned to the army. In 1799, he published his book about his stay in Cayenne (1 in-8° volume, Londres, IV + 174 + 11 pp), which was apparently reprinted twice the same year. The Third edition, here quoted (Londres, 1799), contains a letter of Ramel to the Directoire and «twelve previously unpublished notes». They are illustrated with a portrait of Barthelemy, a former member of the Directoire, deported with Ramel—though an important political figure, he’s not that present in the book, and a portrait of Ramel himself might have been more relevant. There’s another book closely linked to Ramel’s—they’re sometimes bound together; it is entitled Anecdotes Secrètes sur le 18 Fructidor, et Nouveaux Mémoires des Déportés à la Guiane (A Paris—no date). This follow-up compiles various testimonies regarding Cayenne and the deportees. It was printed at least twice—one title page mentions it was available “chez les marchands de nouveautés” while another one mentions Guiget & Cie., Imprimeurs Libraires. The 1814 edition (Paris) mentions J.B. Harmand (de la Meuse) as the compiler. The anonymous memoir about the stay of the runaway deportees in England underlines that Ramel “wasn’t authorized by the government to remain too long in England. His misfortunes hadn’t erased the fact he had denounced Malo in France, during the trial of La Villeheurnois; two days after his arrival, he was ordered to leave for the continent.” Approached by La Villeheurnois, General Malo and Charles Brottier from the Royalist Agency of Paris to overrun the Directoire in 1796, Ramel refused to join in and denounced the conjurors instead. In Synamary, he was incarcerated with the said Brottier—he spells his name Brothier—, whom he depicts as “a mean preacher”, and a close friend of another deportee, Billaud “The Tiger” Varenne, made infamous among the royalists as a fierce Jacobin, and one of the instigators of the Terror in 1793—he eventually died in Haiti in 1819. Among those royalists, Ramel was still something of a traitor.

This supplement is illustrated with a very nice frontispiece representing the death of Murinais—the first victim—, surrounded by his desperate friends. The caption reads: “I’d rather die innocent in Synamary than to live guilty in Paris.” It also includes the moving story of Rovère and his wife. When arrested in Paris, the said Stanislas Joseph François Xavier Rovère, had to leave his eight-months pregnant wife behind him, Mme Dagoult. On learning that they were taking her husband to Rochefort to embark for an unknown destination, she rushed there despite her pregnancy. “When she arrived, the corvette had just left,” writes Delarue, the author of the relation. She was at a loss for two months’ time, until she received a letter from him, which taught her his whereabouts—Cayenne! “She made up her mind to leave for Synamary... Nothing could hold her back... Her servants, the nurse of her young son, her old servant, they all embarked for Guyana (...). Yet, Rovère was guilty, and the forgiveness he asked for from the bottom of his heart demanded a great expiation.” Rovère had voted the death of Louis XVI, which was quite unforgivable among our authors—not to mention that Mme Dagoult had divorced her first husband—a terrible sin! Furthermore, Rovère was also involved in the “Bandes noires”, or dark bunches, that took advantage of the general confusion to loot the national heritage. This was too much for Providence to bear—or at least, not without a last sacrifice. “Willing to open him the doors of eternity,” resumes our author, “Providence still had to punish him... His wife is coming, he knows about her imminent arrival, he’s about to jump into her arms. But the divine justice strikes him, he dies suddenly.” Thus the “dry guillotine” was sometimes the tool of tyrants, sometimes of Providence.

Rehabilitated, Ramel partook in the infamous Rochambeau’s expedition to Saint-Domingue (Haiti). There, he was severely injured, and remained inactive for a long while, before being appointed Governor of La Tortue, the famous buccaneer’s nest of the 17th century, off Hispaniola. Back to Europe, Ramel fought the campaigns of Italy, Spain and Portugal. Appointed Maréchal de Camp by Louis XVIII, he was sent to Toulouse to disarm some royalist militias. As a result, he was murdered during the famous Terreur Blanche (white terror), in 1815. In 1817, Louis XVIII posthumously made him Vicomte.

Ramel’s testimony, just like Pitou’s and Aymé’s, partook in the victimization of the nobles and royalists in the aftermath of the Révolution—they give interesting insight into a world in fusion and about to collapse, but which stood up after many uncertainties. It also shows that there’s always someone ready for you with a guillotine—whether dry or not. In Saint-Domingue, for instance, as the Governor of La Tortue, Ramel received some reinforcement troops and 28 dogs from Rochambeau, with a handwritten note from his superior: “I must inform you that you shall receive no money to feed these dogs. You must feed them on Negroes.” The “canine guillotine”...