College Controversy – Library Wants to Sell Some Valuable Rare Books but Should/Can They? 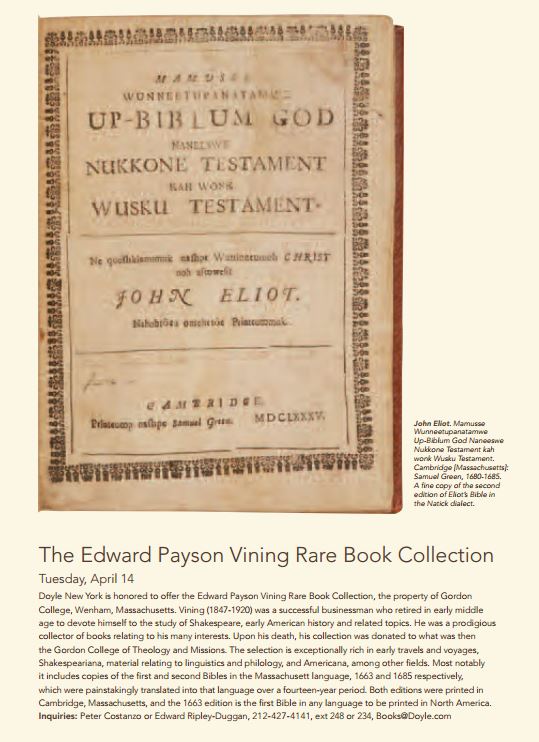 Doyle's announcement before the sale was postponed.

This story may be becoming old hat, but it is one that will repeat itself with likely increasing frequency in the years ahead. It represents the greatest controversy facing libraries today. Those in charge make the always difficult decision to deaccession older, perhaps valuable books. The reason may be to raise money, clear space, or because proper care is no longer affordable for the institution. It is a tough financial choice. Then, others associated with the library, who love the books, but are not responsible for the library's operation, object, and usually, object quite strongly. Both sides have valid points, and there is no clear good or bad. It's a balancing of the lesser of two evils, never a pleasant choice to have to make.

The latest controversy comes from Gordon college, a Christian and liberal arts college outside of Boston. Recently, it announced that it would sell around 10% of the books from a collection given to it almost a century ago. The reason, it explained, was to raise the funds needed to preserve the remainder of the collection. For much of its life, the 7,000-book collection was stored in boxes, and even today, the college's administration said, it lacks the resources to properly care for the complete collection. It noted, “...the College’s leadership determined that restoring and preserving the rarest items in the Collection would be prohibitively expensive and drain resources from the core educational mission of the College.” The administration determined to sell roughly 10% of the collection, making arrangements with Doyle New York to conduct an auction sale in April.

Several faculty members cried foul. They did not want to see any part of the collection sold. These sentiments are neither unusual nor hard to understand. Preservation of culture, and a passing of our history down to future generations, is an essential part of their role as teachers. However, this is rarely an even match. Administrators and trustees, entrusted with practical financial responsibility and ultimate authority, generally carry the day. However, there was a complication in this case. It came in the name of Sandra Webber, 76-year-old great-grandaughter of the original collector. Her objection is that this violates the terms of the original gift to the college.

Edward Payson Vining, born in 1847, was a railroad official. He was not a Cornelius Vanderbilt or Jay Gould, but he evidently made a lot of money in the business. He was able to retire from his job at a relatively early age and devote the remainder of his life to what he enjoyed – scholarly research and book collecting. Shakespeare and theology were his favorite topics but occasionally his interests were a bit more esoteric. Vining did not believe Columbus was the first to visit America, and even the Vikings would have been late-comers by his theory. He believed that a group of Buddhist monks from Afghanistan arrived on the west coast in the fifth century. He wrote a book about it you can read on the internet if you wish to explore the theory. He also believed the character of Hamlet in Shakespeare's play was really a woman. These are among the subjects of his writings during his lengthy retirement.

Vining died in 1920, and the following year, his children bequeathed his collection to Gordon College. The terms of the gift have been lost. Neither the college nor Vining's descendants have copies of the agreement. However, the college's president in 1953 wrote in a book that the trustees “Voted to accept the library on the understanding that the library shall be retained intact as a memorial to Edward Payson Vining and that no material change shall be made in its contents which would affect its material or sentimental value.” This leaves us with a question – is the sale of 10% of the collection consistent with the terms of this gift, and if not, are circumstances such that a sale of part of this collection is legally permissible considering the changes that have occurred in the past century?

The first question is whether a sale of 10% of the items is a “material change” such as to “affect its material or sentimental value.” That might appear to be a small enough percentage to fit this requirement, but arguing against that interpretation, while only 10% of the collection, it appears that what is being sold may represent significantly more than 10% of its monetary value. Numbers in the $2 million range have been bandied about by observers, but this is anybody's guess.

As to whether changing circumstances allow a sale despite the terms of the gift, that is also unclear. Where the terms of a gift require actions no longer legal, such as racial restrictions, these are readily overturned. If an institution no longer has the funds to carry out the mandate, one can see a judge being sympathetic to their situation. Here, Gordon College is not one of those institutions fighting for survival. It's doing quite well. However, where maintenance of this collection is no longer financially reasonable considering the college's mission, a court might well find this an acceptable decision, especially since the money earned from the 10% is earmarked to provide permanent preservation of the remaining 90%.

Gordon's position, if their decision is contested, can be seen in their description of the situation. “The proceeds of any sale of this portion of the collection can then be used to restore and maintain the 90% that the College is retaining, which will continue to be known as the Edward Payson Vining Memorial Library.” They go on to say, “But any difficult decision is ultimately made with the interests of the institution in mind, and we believe this plan will allow the College to maintain the larger collection while being fiscally responsible to all the needs of Gordon and its students.” Their position is that, rather than destructive to the collection, their decision will help preserve the collection while better serving the needs of the college and its students.

Nonetheless, the college decided to put the sale on hold. While there are reports the sale is now planned for the fall, officials stated, “Currently no date has been set for a sale and the College is not proceeding under any deadline.”

As to what will be in this sale, if it happens, that is not known. Naturally, the college has until such time to decide. The announcement from Doyle, before the postponement, said, “The selection is exceptionally rich in early travels and voyages, Shakespeariana, material relating to linguistics and philology, and Americana, among other fields. Most notably it includes copies of the first and second Bibles in the Massachusett language, 1663 and 1685 respectively, which were painstakingly translated into that language over a fourteen-year period. Both editions were printed in Cambridge, Massachusetts, and the 1663 edition is the first Bible in any language to be printed in North America.”