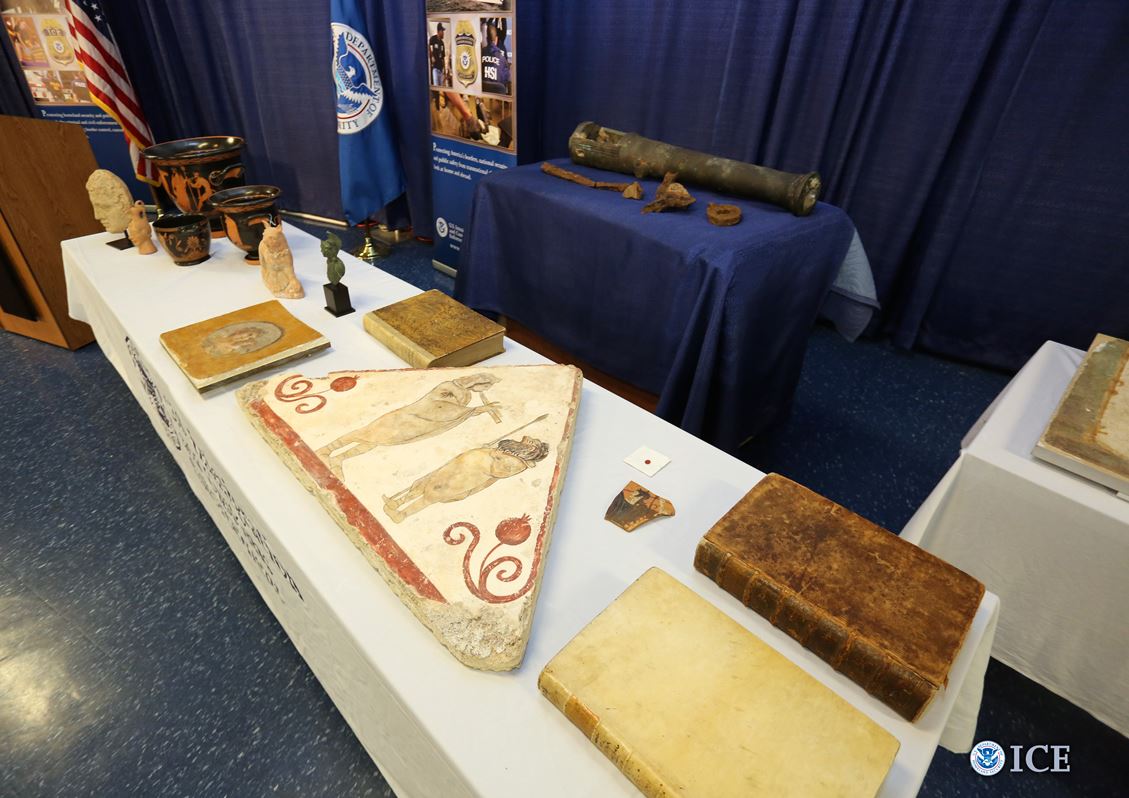 Books and other artifacts being returned to Italy. ICE photo.

Three stolen antiquarian books have been returned from America to their rightful owner, an Italian library. They was part of a cache of 19 cultural artifacts returned to Italy under a bilateral agreement between the nations signed in 2001. Italy has been hard hit by looting of national treasures, undoubtedly because its long history has produced so many. Some of the items returned dated back as far as 460 B.C.

While most of the recent stolen book stories from Italian libraries have concerned the massive theft at the Girolamini Library, where thousands of antiquarian books are believed to have been taken, this one comes from a separate library. This time the victim was the Italian Historical National Library of Agriculture. One of the books is Rariorum Plantarum Historia Anno 1601, a history of rare plants as of 1601. The author is Carolus Clusius (Charles L'Escluse). The second is Stirpium Historiae, by Rembert Dodoens. Each is a work on plants, or an herbal, each prepared near the turn of the 17th century. The two were friends, and shared some of the same illustrations. Both books were published by Christopher Plantin in Antwerp.

The investigation was conducted by the Homeland Security Investigations (HSI) of the U.S. Immigration and Customs Enforcement (ICE), part of the Department of Homeland Security (DHS). Whew. This is another reason why we didn't want to de-fund the Department of Homeland Security. HSI has offices, not only across the country, but around the world. Stopping the trade in stolen antiquities is just one of its many functions. While New York was the center of most of these investigations, the tracing of the books took place in San Francisco and Baltimore. This was because the books were purchased by a San Francisco collector and a Baltimore university.

The San Francisco collector had no idea the two books were stolen, and must have been quite distressed when he learned. In June 2013, the HSI office in San Francisco was informed by HSI Rome that they needed help in recovering two books stolen from the agricultural library and that they had been sold to a collector in their area. Special agents met with the San Francisco collector whom ICE said “willingly turned them over to HSI.” We don't know from whom the collector purchased the books. The seller is legally obligated to refund the purchase price to the collector, although if the dealer is, for whatever reason, unable to refund the purchase price, the collector would be out of luck. The books belong to the library, and the library does not have to buy back what it already owns.

The third book ended up with Johns Hopkins University, having been purchased from a dealer who bought them at auction. They, too, quickly turned the book over to ICE and have since replaced it with a later edition. The 1599 edition is very rare.

In a statement referring to the various artifacts returned, Anthony Scandiffio, deputy special agent in charge of HSI New York, said, “The cultural and symbolic worth of these Italian treasures far surpasses any monetary value to the Italians.” That statement would apply to the first two books. They are valuable, but not outrageously so. Last year, a copy of Rariorum Plantarum Historia Anno 1601 sold at auction for £1,250 (about $1,925 in U.S. dollars), while one sold in 2013 for $2,125. We can't provide comparables for Stirpium Historiae as there were two editions, 1583 and 1616, and it was not stated which edition was involved. Based on auction results, the older edition is likely worth a little more than Rariorum Plantarum, the newer one a little less, but the value appears to be similar to that of the other book. The most recent auction record we could locate for the Imperato book dates back to 2008, and this volume sold for €6,960, or around $10,000 at the time.