Foxe News: A Leaf from a Rare but Influential 16th Century English Book 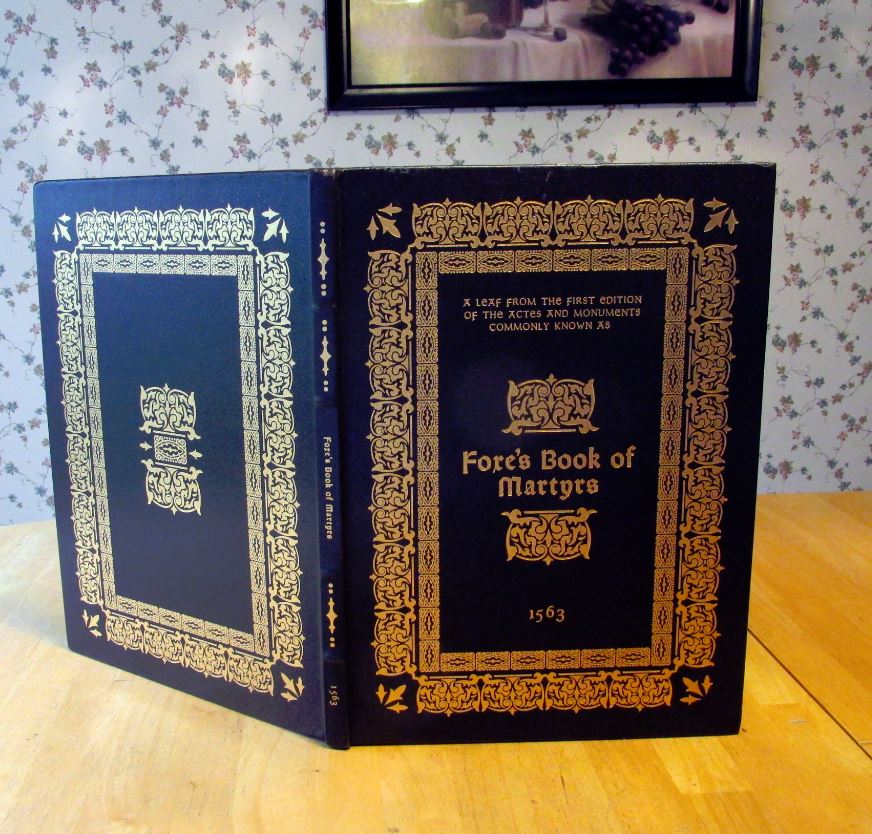 Recently we received a newly published magnificent leaf book. We will stay away from vagaries of official book sizes to note that it is 10” x 14”, bound in full calf leather, and ornamented in intricate gold patterns. The leaf within just surpassed 450 years in age. Complete editions of the book from which it came are known to exist in fewer than 10 copies. At the time it was published (1563), no book in the English language other than the Bible was so large. Next to the Bible, it was probably the most influential book of 16th century England. It was also quite controversial.

The title of this book is A Leaf from the First Edition of the Actes and Monuments Commonly Known As Foxe's Book of Martyrs 1563. The original Book of Martyrs (not its actual title, but its later common name, like Shakespeare's “First Folio”) was written by John Foxe, who lived from 1516 or 1517 to 1587. This leaf book contains an introduction from Benjamin L. Crawford and a lengthy historical essay by Wallace Thornton, Jr.

To understand the book, we need to understand its times. Foxe came of age just as the Protestant Reformation was taking hold. It had spread through parts of Europe beginning with the second decade of the 16th century. It would reach England somewhat later, and under different circumstances. In England, the Reformation would be driven by King Henry VIII's personal wishes to divorce his wife, which was rejected by the Pope. However, Foxe's issue which led to his strong support for the Reformation had nothing to do with Henry's personal desires, or attempts to curry his favor. Foxe was driven by theological issues, and his personal interests took a backseat to his deep religious beliefs throughout his life.

Life in the 16th century was very different from today. Foxe's book was controversial then, and for some still today. By today's standards, many things Foxe said would be deemed anti-Catholic. Many views held by his opponents would be seen today as anti-Protestant. This is a different time. Today, Christians of all different beliefs would be expected to discuss, debate, and explain their points of view, and if differences remained, sit down and enjoy a friendly meal together. Back then, they burned each other alive. It is very difficult to have a friendly, reasonable discussion with those who seek to burn you at the stake. Hence, viewpoints of the era can seem harsh today. We recently saw, in another part of the world, a group with medieval religious beliefs burn a man to death. We have no wish to talk with such people. This was the context within which the Protestant John Foxe wrote his Book of Martyrs. It should be noted that for his time, Foxe was a very gentle and sympathetic man, though he is unlikely to be a favorite of Catholics even today.

By the time of the Reformation, the Catholic Church had been the sole representative of Christianity in the western world for almost a millennium and a half. Few institutions can survive a small fraction of that time without any corrupting influences. It led some to seek God directly, going around the Church they felt acted as a doorkeeper more than a facilitator. What exactly turned Foxe in this direction is not clear, but as he finished his university studies, he found himself looking to the Word, the Bible, not the Church for his way. As we noted, these were contentious times, and being on the wrong side of this issue could prove detrimental to one's career. It limited Foxe's opportunities, which rather than bringing him back to the fold, reenforced his beliefs. He began looking at Church history, and to pre-Protestant “martyrs,” those who had suffered at the hands of the Church for their beliefs.

If this time in his life turned him negative to the Catholic Church, what happened next would have an even deeper impact. In 1553, the sickly 15-year-old Protestant King, Edward VI, died, to be replaced by his Catholic half-sister, Mary I. The new Queen began dragging off leading Protestants, many to be executed. Several of Foxe's friends were taken away. He too ended up on the list, but managed to escape to Europe just as authorities were tracking him down. Mary would come to be despised by Protestants, given the name “Bloody Mary” for her treatment of them. Foxe remained in Europe for her five-year reign, but stories of her brutality reached him. He wrote a shorter precursor to his Book of Martyrs, which covered earlier martyrs he had been researching before his exile, and some of those of Mary's era. After Mary died childless in 1558, the throne was passed to her Protestant half-sister Elizabeth. Foxe returned to England, and began work in earnest on this first edition of his famous book. This time, a substantial portion of the book would be devoted to the martyrs of Mary's reign.

When his book was finally published in 1563, it became enormously popular with English Protestants. There was much residual anger from Mary's reign, and still great fear that Elizabeth would be overthrown and another Catholic monarch installed. Elizabeth would rule for 45 years, but no one knew at the time this would come to pass, and several attempts were made to overthrow her along the way. Foxe became, through his book, the defender of Elizabeth's Protestant reign against what her followers saw as attempts by a Satanic Church in Rome to retake control of England. His accounts of terrible things the Church had done to his book's martyrs reenforced this image of good vs. evil, and the book's woodcut illustrations of martyrs being consumed by fire, or papists being dragged into Hell, did not aid in bringing about mutual understanding. This was the 17th century, and there was little room for seeing shades of gray between the black and white of good and evil.

If one looks past the language about papists, there was more to see in John Foxe than a simple, extreme advocate of one side. He saw the Church as a hindrance to communion with God, so to him it became a false Church. The Mass, rather than connecting people to God, stood in the way. The Word was the real Church. His martyrs became symbols of the real Church, the papists of the false.

There were, naturally enough, martyrs on the other side, and Catholics would see him as blind to this. However, these were terrible times, and those in a war rarely stop to look at the good side of their enemies, or for their own shortcomings. In time, we can perhaps look at our roles in the battle more objectively, but during the fighting, we usually see things as black and white. Foxe saw the wrongs done to his martyrs, often, though not always, had it right, and told the story as his side saw it.

It should be noted that Foxe was a notable humanitarian for his time. He did not seek to make martyrs of others in return for what was done to people of his view. He opposed execution for heretics, common at the time. He interceded with authorities (usually without success) to save the lives of those whose views he vehemently rejected. He favored excommunication, hoping they would one day return to the fold. This is not to say he developed any particular tolerance for beliefs different from his own. He was not an objective observer. What he did believe in was humanitarian treatment of others, even if he had no doubt their beliefs were wrong.

Perhaps his views toward Catholics might have fit better with the 19th century. At that time, there was much condemnation of “popery” and the like among Protestants, but they weren't burning each other then either. From today's standpoint, we might say he is two centuries behind the time. But Foxe did not live in the 21st century. He lived in the 16th, and from that vantage point, we might say he was two centuries ahead of his time.

Of course, the theological issues underpinning his beliefs are still disputed today, and Foxe remains an influence on Protestant thought, an anathema to Catholic thought. That is a difference of opinion not a topic for this look at Foxe, and this book with a leaf from the major achievement of his life. What we can do is celebrate this beautiful new book with its very old leaf, and contemplate the man and his times, the good and the bad, and realize how far we have come from the days when we settled our differences by fire.

The leaf book from Foxe's Martyrs is available ath the following website: www.rarebibles.com/john-foxe-leaf-book.