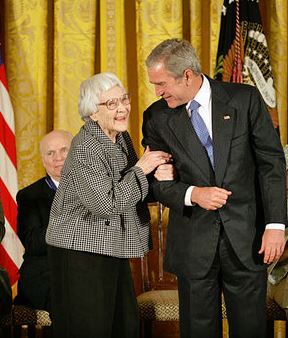 Some authors take a while to write that second book. Sophomore slump, writer's cramp, any number of reasons can make that second book hard to write, even, maybe especially, if the first was a great success. However, Nelle Harper Lee must have set a record with the recent announcement that her second novel will be published this summer. It follows on the heels of her enormously popular first novel, To Kill A Mockingbird, by a mere 55 years. For comparison's sake, one Corin Tellado, who tops Wikipedia's list of the most prolific writers, wrote 4,000 novels between the date of his first and the date of his death – 63 years between them.

What we learned from the surprising announcement by publisher HarperCollins was that the book, while effectively a sequel to To Kill A Mockingbird, was actually written prior to her only published book. Indeed, this “new” book, Go Set A Watchman, was taken by Lee to a publisher who recommended she write about the characters' lives 20 years earlier. In Watchman, the protagonist, “Scout,” has returned from New York to her hometown of Mayville to visit her father, Atticus Finch. According to HarperCollins' statement, Lee followed her publisher's advice, wrote To Kill A Mockingbird, put the completed Watchman aside, and never returned to it. It was lost, or misplaced, for over half a century before being found attached to an original typescript of Mockingbird.

This history has raised a few eyebrows, but we will get back to that in a moment. Here is HarperCollins' statement about the discovery of this book:

“Harper Lee says, 'In the mid-1950s, I completed a novel called Go Set a Watchman. It features the character known as Scout as an adult woman and I thought it a pretty decent effort. My editor, who was taken by the flashbacks to Scout's childhood, persuaded me to write a novel from the point of view of the young Scout. I was a first-time writer, so I did as I was told. I hadn't realized it had survived, so was surprised and delighted when my dear friend and lawyer Tonja Carter discovered it. After much thought and hesitation I shared it with a handful of people I trust and was pleased to hear that they considered it worthy of publication. I am humbled and amazed that this will now be published after all these years.'

“Go Set a Watchman is set during the mid-1950s and features many of the characters from To Kill a Mockingbird some twenty years later. Scout (Jean Louise Finch) has returned to Maycomb from New York to visit her father, Atticus. She is forced to grapple with issues both personal and political as she tries to understand her father's attitude toward society, and her own feelings about the place where she was born and spent her childhood.

“After To Kill a Mockingbird was published by J. B. Lippincott in 1960, Harper Lee set aside Go Set a Watchman and never returned to it. The original manuscript of the novel was considered to have been lost until fall 2014, when Tonja Carter discovered it in a secure location where it had been affixed to an original typescript of To Kill a Mockingbird.”

The announcement elicited not just shock for being unexpected, but because the circumstances sounded so strange, and the reaction so unlike Ms. Lee. Harper Lee had long maintained she had said everything she had to say in Mockingbird and had no more to add. She also closely guarded her privacy, was litigious toward those she thought tried to exploit her, and if not quite as reclusive as J. D. Salinger, she still spent most of her last 55 years keeping to herself.

The timing also raised questions. For most of her adult life, Lee was represented by her older sister, Alice Lee, who was also an attorney. As unofficial gatekeeper, Alice guarded her sister's privacy resolutely for all those years, but on reaching the age of 100, she retired. Alice died last fall at the age of 103. Then we find that around the same time, this long lost novel is suddenly discovered. The finder, according to HarperCollins, was Alice's successor as Harper Lee's legal representative, Tonja Carter. While Carter has served in this capacity since Alice retired, Alice was still around to observe how her sister was represented until last fall.

Meanwhile, after years of denying any reason to write another novel, in HarperCollins' statement, Ms. Lee said she was “delighted” by the find by Tonja Carter, whom she describes as her “dear friend.” It all seems so contrary to her personality. Now 88 years old and living in assisted care, Ms. Lee is said to be nearly blind and deaf. She suffered a stroke eight years ago. In 2011, Alice wrote a letter to a (unauthorized) biographer saying, “Poor Nelle Harper can't see and can't hear and will sign anything put before her by anyone in whom she has confidence.” The announcement came solely through HarperCollins, and Harper Lee has not met with anyone to confirm their account, and apparently has no intention of doing so.

Naturally, the new book is expected to be an enormous success. HarperCollins plans to publish the book in July in a print run of two million copies, which matches first runs for the most popular of authors. Those who loved Mockingbird long hoped she would write another book, but having a sequel to Mockingbird is even better. The sales almost certainly will be enormous, though it is not clear what the author would do with so much money at this stage of life, or why she is so delighted after all these years of reticence to see another book published under her name.