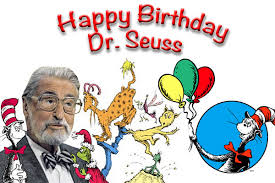 When history looks back on American writers and illustrators of the 20th century it may well turn out that the children’s books of Theodor Geisel (1904-1991) aka Dr. Seuss will be among the most popular, influential and collectible of the era.

Born in Springfield, Mass, educated at Dartmouth College, Geisel died in La Jolla and there is a large and well documented collection of his work housed at the University of California San Diego. In addition to his best known pen name - Dr. Seuss - he also wrote under the names Theo LeSieg and Rosetta Stone.

During his lifetime he worked in almost every imaginable format: early success came as an illustrator for “Flit” pest spray and he had many other advertising assignments. His first title written and illustrated for children “To Think That I Saw it on Mulberry Street” came out in 1937. He was active as a cartoonist during the war years and he also had a substantial career in motion pictures and television. Editions of his prints and sculpture were issued by his estate after his death.

But it is the 48 books he wrote for children that assure his place in the pantheon of American authors and illustrators; and it was his to use simple vocabulary to make learning to read easy and fun that set the publishing world on its ear in 1957 with the first appearance of “The Cat in the Hat.”

The way Wikipedia relates it “In May 1954, Life Magazine published a report on illiteracy among school children, which concluded that children were not learning to read because their books were boring.

“Accordingly, William Ellsworth Spaulding, the director of the education division at Houghton Mifflin (who later became its chairman), compiled a list of 348 words he felt were important for first-graders to recognize and asked Geisel to cut the list to 250 words and write a book using only those words.

“Spaulding challenged Geisel to ‘bring back a book children can't put down.’ Nine months later, Geisel, using 236 of the words given to him, completed “The Cat in the Hat.” It retained the drawing style, verse rhythms, and all the imaginative power of Geisel's earlier works, but because of its simplified vocabulary, it could be read by beginning readers.”

The Cat in the Hat and subsequent books written for young children achieved significant international success and they remain very popular today. Random House was the publisher of the regular edition, while Houghton Mifflin issued the school copies.

Decades later the Cat and other titles in the I-Can-Read – Beginners Book series were still in print and selling strongly. Wikipedia writes “In 2009 alone, Green Eggs and Ham sold 540,366 copies, The Cat in the Hat sold 452,258 copies, and One Fish Two Fish Red Fish Blue Fish (1960) sold 409,068 copies—outselling the majority of newly published children's books. The Wikipedia article has 94 sources cited and multiple links to biographical publications including whole scope of Seuss genre including films.

Random House recently announced that a newly discovered unpublished Seuss book “What Pet Should I Get?” is coming in July 2015. www.facebook.com/DrSeussBooks

A good bibliography a must for the serious collector

For the would-be Seuss collector two books appear to be indispensable. They are

First Editions of Dr. Seuss Books: A Guide to Identification by Helen and Marc Younger, Dan Hirsch. According to 1stedition.net, “only 1,000 were printed and signed by the authors” in 2002 making the bibliography a prized collectible in its own right. The authors reportedly spent seven years researching all of Dr. Seuss’s 1st edition children’s books to compile this guide. Prices for the few available copies of this reference work start at about $150 and go up from there. It is considered reliable (but not necessarily infallible).

A second useful work is The Dr. Seuss Catalog: An Annotated Guide to Works by Theodor Geisel in All Media, Writings about Him, and Appearances of Characters and Places in the Books, Stories, and Films by Richard H.F. Lindemann. It is described as a 255 page bibliography providing an exhaustive arrangement of chronological information, including descriptions of bindings, translations as they appear, and reissue information.

The guide discusses Dr. Seuss subject matter in works of art, including its symbolism linked to the more than 900 fictional names, places and terms to the works in which they appear. Though not as expensive as the prior item, it is still relatively scarce and copies available are priced from about $7.50 to $150 with most in the $30-$40 range.

Another fast way to come up to speed on Dr. Seuss is the visual biography The Seuss, the Whole Seuss and nothing but the Seuss by Charles Cohen published in 2004 for the Seuss Centennial. This volume comes in paperback and hard cover. It is profusely illustrated and is readily and inexpensively available and gives a very thorough look at the good doctor’s career in many media.

A good deal of Dr. Seuss first edition points and price information can also be found on line at modernfirsteditions.net/dr-seuss-first-editions

(2015 PBA auction) Green Eggs and Ham - Color illustrations throughout by Dr. Seuss. Original color pictorial boards, dust jacket. First Edition, First Printing. In the very scarce early dust jacket. Matches all first printing points and, according to Younger & Hirsch this dust jacket is among the earliest issued, with the "50 Word Vocabulary" label pasted on, instead of printed directly on the jacket. Younger & Hirsch 27. $1,200

(2014 Swann Auction) And To Think I Saw It On Mulberry Street, 1937, first book, first issue with boy on front cover of volume and dust jacket wearing white shorts (versus blue shorts of later issues). Rear jacket flap with five paragraphs, ending with a mention that Dr. Seuss is already at work on "500 Hats" in unclipped and unrestored first issue jacket. Younger & Hirsch 1. $6,750

(2014 Swann Auction) Cat in the Hat, 1957 first edition, first printing, with unglazed covers, jacket priced "200/200" on front flap, and rear panel listing educators' reviews with no mention of the Beginner Books series. A fine copy in like jacket. Younger & Hirsch 7. $2,750

Here are some prices realized on eBay during last 90 days

At the end of February 2015 there were over 52,000 Seuss related items offered on eBay. These included clothing, toys, art, stamps, home furnishings, movies and many other categories. Of that huge number about 600 offerings were books. Here are a few bench mark prices from the “sold” column.

Same as above in slightly lesser condition 1 bid $520

Same as above in shabby condition $363

Same as above with all Younger & Hirsch points, good w/dust jacket $240

A substantial amount of on-line price information for Seuss and links to bibliographic materials can be found at 1stedition.net/drseuss.html

Dr. Seuss on display in his home town:

A privately organized show of various Seuss art work is scheduled to visit multiple US destinations between April-Nov. 2015 www.drseussart.com/exhibitions

Library and Special Collection at UCSD

There is a large special collection of work by Dr. Seuss including advertising art, wartime and other cartoons at UC San Diego

Last but not least there are innumerable funny (and a few smutty) parodies on Seuss classics. Some can be found at www.annexed.net/box/drseuss

We’ picked out a few verses for your amusement.

One day God said, "This is what I will do:
I'll send down my son. I'll send him to you,
To clear up this humpity bumpity hullaballoo.
His name will be Christ and he'll never wear shoes.
His pals will all call him 'The King of the Jews.'

He rode on the back of a black Sassatoo
Which is the blackiest creature you ever could view.

He rode to Jerusalem -- home of the grumpity Jews
Where false prophets were worshiped -- some even in twos.
There was Murray VonMyrrh and Ghengis Vovooz --
The one you could worship by taking a snooze.

I cannot count them in a box

I cannot count them with a fox

I cannot count them by computer

I will not with a Roto-Rooter

I cannot count them card-by-card

I will not 'cause it's way too hard

I cannot count them on my fingers,

I will not while suspicion lingers.

I'll leave the country in a jam--

marijuana parody modeled after Cat in the Hat
We'd no drugs... not a lot
So we sat with a craving
For grass, weed and pot

I sat there with Franklin
We sat on the floor
And I said, "How I wish
That Fat Freddy would score

No dope for a reefer
No money, no cash
So we sent out Fat Freddy
To refill our stash